Zelensky is going to "throw" Putin and seize the Donbass

October 7 2019
24
The domestic mass media, who were flashing out at the crowd gathered in Kiev against “surrender according to the Steinmeier formula”, are indeed quite miserable “under-Maidan,” unfortunately, miss a number of quite important things. The protesting idiots that are now rushing around in the capital, and its other towns and villages, are not at all a problem of President Zelensky, who considers himself to be more cunning than anyone else in the world, and the government headed by him. Most likely, they are just part of his plan, essentially petty, and, by the possible results, bloody. 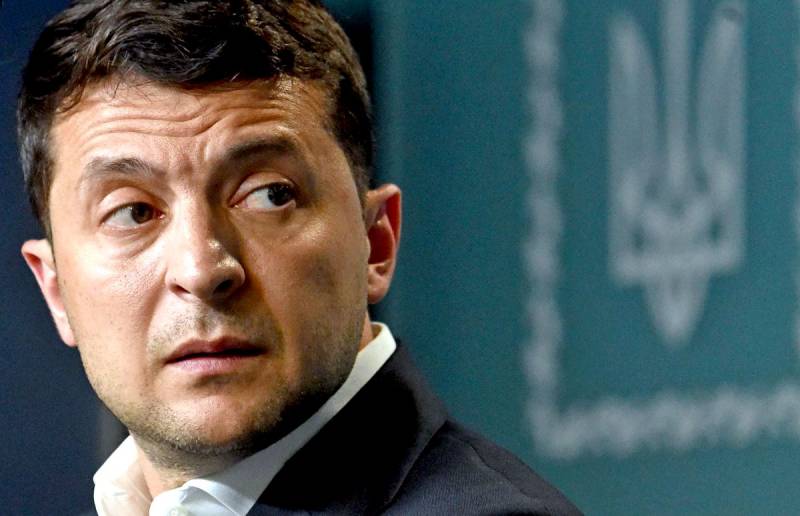 The plan, according to which Russia should be left in the cold, Europe is confronted with the fact, and the fate of Donbass is destined to be “de-occupied” by iron and blood. On the conditions of Kiev and without any “formulas”. There are reinforced concrete evidence that such intentions not only exist, but are already being implemented.

In fact, all discussions regarding whether the notorious “Minsk Agreements” are going to be implemented in the “non-winter” territory can be closed after a single event. We are talking about the All-Ukrainian Scientific and Practical Round Table held in the frontline Mariupol the other day with an extremely captivating title: "De-occupation of Donbass: the legal mechanism for restoring the territorial integrity of Ukraine." How do you like? The conversation is not about the performance of some kind of “Minsk”, which was seen in Kiev in a coffin, and in shoes of the corresponding color and style. And not even about the relatively politically sounding “reintegration”. "De-occupation" - and the point! I do not know to what extent this very “table” was “scientific,” but practitioners of a very specific specialization gathered around him a lot. From the Ukrainian army, SBU, police. Well, also from "public organizations". You guess what kind and sense. The issues discussed were quite appropriate for the selection of participants. The main one of them I would call this one: "Restoration in the temporarily occupied territories of all state institutions and law enforcement agencies of Ukraine." Do you have any idea what this is about? What is there "autonomy"! What kind of courts and prosecutors are not registered in Kiev registered in “Minsk”, what are “people's militias”, and, in the end, “self-government bodies” ?! None of this will happen! And there will be a “recovery." For example, the Ukrainian Security Service with its secret and explicit torture dungeons, the police and everything else that is attached to this.

And this is not an empty idle talk! Representatives of the Ministry of Internal Affairs of the country cheerfully reported that the department had already trained at least 800 police officers “specially for work in de-occupied territories”. The Ministry of Internal Affairs is not going to stop at this and the cadres of future Einsatzkommands for Donbass are outstripping the pace. What are the Steinmaers, what are you talking about ?! None of the serious people who make real decisions in Ukraine, and does not nearly allow the implementation of the most important components of the agreements on the terms of which the Donbass could return to its composition. And this, mind you, is not hiding at all, on the contrary - it is advertised and sticks out. The new Chairman of the parliament there, Dmitry Razumkov, in a television interview of October 6, bluntly and clearly says: “First - control over the border, and only then - elections and some kind of“ special status ”. Maybe ... Moreover, he refers to the Republic of Donbass only as "for now a temporarily occupied territory." From this, in fact, everything else follows. The position of his boss is also confirmed by the head of the parliamentary committee on foreign policy, Bogdan Yaremenko. According to his statement, they intend to conduct negotiations on transferring the border with Russia to Moscow exclusively with Moscow, and not with representatives of the DPR and LPR, whom he calls nothing more than “militants,” with whom, in fact, no one is going to conduct any conversations.

It is precisely this assumption that allows us to make a number of points. First of all, the "servant of the people" behaves in the current, it seems, a rather delicate situation, absolutely calm. So, as if he knows perfectly well what will happen next. On the contrary, he confidently turns to the “protesters”, as it were, but in fact, using the occasion, to all the inhabitants of Ukraine. And he declares that the law on the special status of Donbass, the current version of which, adopted in 2014, expires on December 31, 2019, is not going to implement it at all. Bad law, Poroshenko’s, pooh on him! “We will write a new one!” - assures Ukrainians Zelensky. It is planned to write “all over the world”, with a nationwide public discussion in which “all Ukrainian society” will certainly participate. In fact, as you well understand, lawmaking, for the most part, the most "national-patriotic" concerned citizens of the "uncovered" will climb into this very law. And they write such a thing there that even take out the saints. It is very similar to what exactly the cunning comedian seeks to reduce to this situation. Then to widely shrug hands in front of the West and repentantly say: “What am I? I was ready for anything, at least for Steinmeier, at least what you ordered ... But here, you see, Vox Populi, against which you can’t argue. But you yourself demand respect for the will of the people from everyone and everywhere demand ?! ” There is no doubt that it will somehow be so. And then conversations about the “peacekeepers” and the “Croatian scenario” will begin. Everything is underway.

The wretched attempt to dissociate itself from the very time and place of the “protests” that occurred, made by the head of the Zelensky administration, Andrei Bogdan, leads to the same thoughts. The fact that there wasn’t enough fantasy for anything but a poor post where the protesters are accused of “paying” and some dubious “price lists” are given, this, excuse me, is the cost of Facebook thinking of the current Ukrainian “government”. What to take from them. Be that as it may, but the picture of the “universal indignation of Ukrainian citizens by surrender”, clearly directed at the external (western) consumer, is now being painted by Kiev with wide strokes and the brightest colors. All sorts of sociologists and other "experts" are hastily pulled out of the closets to give credibility to this action, urgently starting to "study the opinion of the people" in the right and "right" way. For example, the director of the Foundation for Democratic Initiatives, Irina Bekeshkina, has already admonished. Her organization, having conducted the corresponding “poll”, established: “Not more than 25-27% of Ukrainians are ready to accept the end of the war at any cost.” Residents of the country, it turns out, "against the elections in the occupied territories." They “deem unacceptable the special status of Donbass, spelled out in the“ Minsk Agreements ”. It turns out that the prospect of “a complete amnesty for the militants and the creation of an autonomous local police” causes a special mental pain among the residents of the “uncountable”. “And so - throughout the country!” - Madame Bekeshkina convincingly. Sits, you see, the poor old woman is somewhere in the remote village of Chernihiv or Volhynia, and weeps bitterly about the upcoming “hail” and shameful surrender ...

The "last checkpoint" of the Nazis

All this muddy wave - for good reason. Most importantly, she already finds a certain response in the West! So, last week at a meeting of the OSCE Permanent Council, held in Vienna, a special statement was adopted, which again raises the theme of "creating the right security conditions for elections in accordance with Ukrainian law." How such formulations are interpreted in Kiev, I think there is no need to explain. But the main thing is not even that. On October 7, the planned separation of forces should begin at the site in Zolotoy, the implementation of which was announced by Moscow as one of the indispensable conditions for a meeting in the "Norman format." So - while some freaks are jumping in Kiev and other places, arranging the "Steinmaermaidans" swept up on a lively thread, the armed detachments of Ukrainian nationalists have already advanced. They intend, in their words, to “protect local residents”, and, most importantly, “to prevent the emergence of at least one separatist”. And this is not a boast, again. The footage of the video recorded by the head of the openly Nazi “party” “National Corps” Andrei Biletsky clearly shows “activists” in army uniforms, demonstratively holding objects in front of them, which are nothing more than traveling covers for firearms. That, right up to the Kalashnikov with truncated functions, I recall, in Ukraine is in free sale ...


Well, Biletsky, in fact, does not hide the fact that not only activists of the National Corps, but also “veterans of the Azov regiment” take part in the operation to disrupt the separation of forces, which he called the “Last checkpoint” action. That is - one of the most bloody and infamous Ukrainian punitive. They intend to “stand still” until the “complete cancellation of the shameful“ Minsk agreements ”, while taking up, if necessary, a“ circular defense ”. And this is already much more serious than stupid races, even if under the windows of the presidential administration, it does not matter if they are paid or not. If Kiev had at least a drop of real political will to fulfill the recently undertaken obligations to establish peace in the Donbas, dragged to Zolotoye Biletsky, the bastard would have been packed in junk cars. At least - they would have disarmed and sent home. However, nothing of the kind is happening and is unlikely to happen. Now, at the final stage of gas transit negotiations, the Ukrainian authorities, like air, need "trump cards" to put pressure on Moscow. What could be better than another bloody aggravation on the contact line, which, of course, is blamed on the “Russian mercenaries”? Anyway, it's time to understand: Ukraine does not intend to do anything, to negotiate with anyone. Donbass is going to capture there. One way or another, sooner or later, but precisely to capture. “De-occupying” ... One can understand the Kremlin’s desire to follow diplomatic protocols and “road maps” to the last, which, in truth, are not worth the paper on which they are painted. However, the fate of the Donbass will be decided, apparently, will certainly not be at the negotiating table. In any case, it is Kiev that does everything so that there simply is no other choice.

We are in Yandex Zen
It's important
30
How Ukraine break Putin's plan: six tips Zelensky
Ukraine from the inside: traitors, curators and those who watch from the Kremlin
Reporterin Yandex News
Read Reporterin Google News
24 comments
Information