US decides to trade war against Europe: Airbus under attack

October 4 2019
4
They nevertheless decided on this. The United States announced its readiness to introduce restrictive duties on many goods manufactured in the European Union from October 18. Donald Trump on this occasion, as usual, noted an optimistic post on his favorite Twitter, where he accused the EU of many years of "very bad treatment" with his country in matters of trade. And in advance he declared the discriminatory decision "a good victory" ... 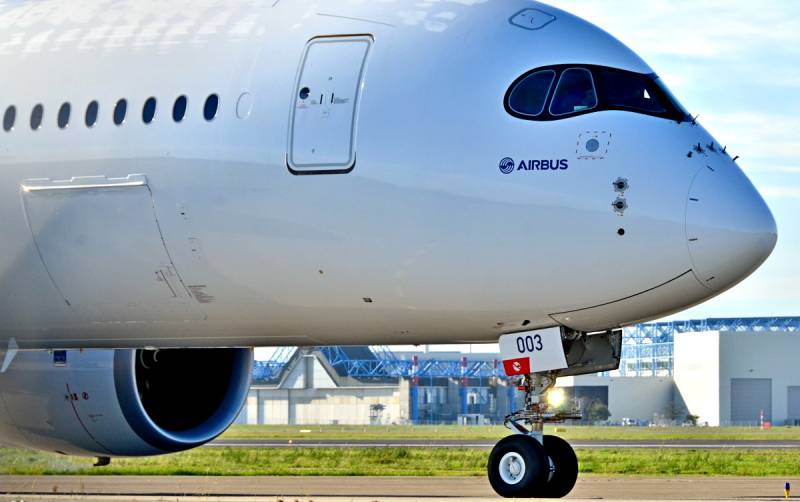 Well, the victory is somehow here, sorry, is not visible. Rather, the United States has opened another “second front” against itself, loved ones. As if confrontation with China, from which the world the economy how much in vain fever, they are not enough. International analysts and experts who are trying to predict the consequences of the decision made by Washington today are dizzy. We should be interested in the answer to the question: how can it affect Russia? Let's try to think together.

Respond for Boeing, in kind! And in the WTO ...

As a matter of fact, the roots of the current tear lie in the claims put forward by Washington to the European Union regarding the “illegal” alleged subsidization of the aircraft manufacturer Airbus SE. According to statements made repeatedly by the United States, it was this, and not the flagrant security problems of the aircraft that were being released and the many lives of the crash that had taken their lives, that prevented Boeing from concluding deals to sell at least three hundred of its aircraft and “seriously shook its position in world markets” . If this is not a typical example of shifting from a sore head to a healthy one, which is the favorite receiver of Americans in literally all areas, then it is not clear what to call them. Themselves weakened to the limit the control over the manufacture of the 737 Mach, allowing the installation of a "killer program" there, ditching a lot of people and causing a categorical reluctance of the whole world to deal with Boeing products, and now, you know, Europeans are to blame! It is not surprising that, in the first place, ten percent US duties are imposed precisely on new aircraft manufactured in the EU. But if only for them!

The World Trade Organization, which spoke in this dispute entirely on the side of the United States, issued a verdict according to which they could “solder” to Europeans duties worth 7 and a half billion a year! This, by the way, is the largest amount established by the WTO on such claims. The previous “record" decision was half the size. In Washington, relishing the victory, they say that they do not intend to "cut the answer in full" yet. Like, enough from these European zadak restrictive tariffs of 10% for airplanes and 25% for agricultural, food products and some industrial goods. To begin with ... Well, the extremely sad Chinese experience more than convincingly shows that Washington gets a taste for conflicts of this kind very quickly - both in relation to an increase in tariffs themselves and in terms of expanding the lists of sanctioned goods. So far, great disappointment awaits American lovers of French wines, Italian cheeses, Spanish jamon and coffee produced in Germany. Ah, yes - also whiskey from Britain. The foggy Albion, to which the United States promised to "shoulder" in Brexit’s difficult year, they also “weighed” sanctions from the heart: for whiskey, cookies, cashmere sweaters, textiles and more. Real friends!

Europe will not be silent

The main array of sanctions is directed precisely against the UK, Germany, France and Spain. After all, it is them in the United States that are considered the main culprits in the “Airbus case”. However, a number of restrictions (primarily on food) will affect almost all countries of the European Union. It is not surprising. Donald Trump has long been discussing the topic of the “imbalance” of trade relations between the Old and New Worlds and wants to “correct” them, in his usual manner of “swinging a saber”. The same French wines, something terribly not pleasing to the head of the White House, he tried to properly "tax" more than once. As well as German cars. Numerous statements by American experts, who transparently hinted the president to file the notorious bitch on his own, and directly stated that a whole series of goods that he is trying to “push” in the US markets, simply have nothing to replace, remained, as one would expect voice crying in the desert. As well as quite specific statements made earlier and now sounding from Europe that they do not intend to sit back and docilely bear the fate of boys for whipping and scapegoats. The answer will be. Fortunately, knowing the American leader, Europeans prepared ahead of time for a "trade war" with the USA. A list of four hundred US goods worth $ 20 billion a year against which duties may be imposed was prepared there since the spring, when it became clear that the scales in the "aviation" dispute were leaning toward Washington.

The words of the European Commissioner for Trade, Cecilia Malmstrom, who immediately threatened Washington with “mirror measures” regarding its exports, were not the first warning of that kind, said immediately after the publication of the WTO decision. Even this summer, this stern lady directly spoke out that Brussels categorically does not accept “regulated trade”, quotas and restrictive tariffs. And, "just in case", they have already compiled a very extensive list of American goods that are ready to be "taxed" so that it doesn’t seem enough - for 35 billion euros! Then it was about the prospect of Washington imposing duties on European cars and parts for them. There is no doubt that in the present case the reaction will be no less acute. If a few months ago, Mrs. Malmstrom expressed her hope that “there would be no reason for such measures,” now there is no such hope. Having saddled the beloved sanctioned ridge, Washington will not abandon its intentions. Moreover, with the support of the WTO. To say that for Europe is bad news - to say nothing. According to financial and economic analysts, the Old World is balancing on the brink of recession. Eurozone stock indices steadily and confidently go down, demonstrating a fall in business activity and industrial production. There are few British “fortunes” with a “divorce” that threaten to collapse - so now this is also ...

“So they will crash soon!”

These words of Vladimir Putin said about the economy of the United States during his speech in the framework of the Russian Energy Week, belonged to a slightly different aspect, but they are simply ideal for this case. Mercilessly rocking the “boat” of international trade, Washington is increasingly pushing the world for a new crisis, in comparison with which 2008 may well seem like babble. Naturally, for Russia there is nothing positive and cannot be. Industrial production and consumption will fall, and the volume of imports of energy resources will decrease, and prices for them will begin to decline. After all, now is not the 30s of the last century, when the Great Depression largely played into the hands of the USSR. Our country is quite tightly integrated into the world community, trade and financial systems. The rapid collapse of everything and everything, cataclysms in the stock markets and currency "dances", will inevitably hit us. Where are we going to ... In this sense, of course, the fears already expressed by experts that a new round of escalation of “tariff wars” could turn out to be far more harmful for global markets than the confrontation between the US and China suggest rather sad thoughts. On the other hand, a certain positive for Russia is still present in this situation.

Perhaps the “economic aggression” unleashed by Washington, the reality of which the Old World tried not to believe in until the very end, will nevertheless make Europeans realize that there are not “reliable partners” across the ocean, but those who want to use Europe roughly and cynically for their own benefit . It would be very nice if the US actions became an occasion for reflection of Brussels, Berlin, Paris and other capitals about whether in the future it would be so reckless and to the detriment of oneself to follow the course that is being laid in the White House and the State Department. Including - and anti-Russian. What if, having received their own portion of “fair” sanctions, they would finally doubt the legitimacy of the numerous restrictions imposed against our country? And what - the refusal, at least partially, to follow the "economic Russophobia" imposed on Europe by the United States, would be an excellent "asymmetric response" to the actions of Americans. As one example, the same Denmark, which Vladimir Vladimirovich mentioned, speak at the above-mentioned event and called it a “small country”, which is under “tremendous pressure from the USA” regarding “Nord Stream-2”. So, maybe enough to endure this very pressure? Well, how much can one indulge Washington’s desire to manage in the European Union, as in one of its own states, imposing its approaches as in policyso in economics. The EU’s “insight”, achieved at a high price, that it is worth choosing enemies, friends, economic partners on their own, and not at the direction of the ocean, would be a huge “plus” for Russia. I want to believe that it will be so.

Calling the start of a "trade war" with Europe a "good victory," Donald Trump, I think, nevertheless hurried. I don’t know if the meaning of the expression “Pyrrhic victory” is accessible to him, but I think this word in this situation can be applied exclusively in this context.

We are in Yandex Zen
It's important
5
No deal will be: the US and China begin a trade war to death
In the trade war of the United States and the European Union lies the direct benefit of Russia
Reporterin Yandex News
Read Reporterin Google News
4 comments
Information