The death of the Malaysian Boeing: traces lead to Kiev?

October 3 2019
7
More than five years ago, in the sky over the Donbass, where active fighting was then taking place, a Boeing belonging to Malaysia was shot down. 298 people flew on it, and all of them died. The blame for the tragedy was immediately blamed on Russia. Despite this, Malaysia itself still expresses doubts about the objectivity of the investigation. Surprisingly, now the Netherlands has begun to change its position. What does this mean, and will the truth be established eventually? 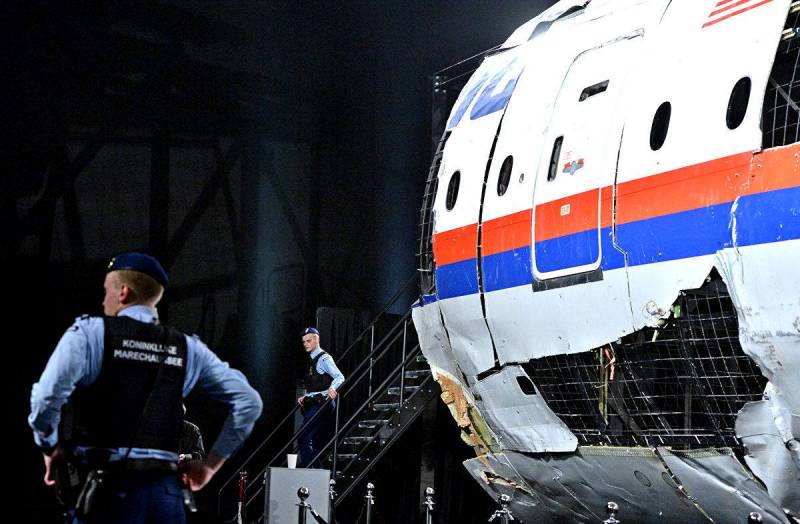 Before any adequate investigation, the following questions should naturally arise. How did a civilian flight turn out over an active combat zone where air defense systems had previously been used and aircraft had crashed? How exactly was the Malaysian Boeing shot down? And, most importantly, why, what was the motive of the criminals who committed such a crime?

More recently, the Western investigation team “found” the perpetrators, who turned out to be Igor Girkin (Strelkov), Sergey Dubinsky (Petrovsky), Sergey Pulatov and Igor Kharchenko. They allegedly arranged for the delivery of an incomplete Buk from a Russian military base, which is why:

Although they themselves did not press the buttons, we suspect that they worked closely to get the Buk system and deliver it to the launch site in order to bring down the aircraft.

So, investigators “suspect” that the “Buk” was delivered in order to bring down a specific “Boeing”, based on the literal meaning of the statement. What for? Yes, God knows him, in the West they clearly proceed from the fact that the Russians are frostbitten bloodthirsty monsters who kill 298 people, like slamming a fly, just like that.

Some doubts could have been raised by a message published in the publication “Summary from Igor Ivanovich Strelkov” that at the same time, the Ukrainian An-26 was allegedly shot down by the militia. Say, shot down by mistake. But here we must remember the following circumstances.

At first, this public is not led by Girkin-Strelkov, but completely by strangers who have settled on the resonant topic. On their own initiative, they “wool” all messages from open sources and drag them to their group, including all kinds of information junk. Knowing this, it is extremely simple to “stuff” the necessary information. The public administrators themselves admitted that they received data on the death of the An-26 not from Strelkov-Girkin.

Secondly, a certain “Buk” at the militia really was, but incomplete. Even to use a fully working air defense system, a team of professionally trained specialists is required. Let's see how long the local military personnel have mastered the S-300 systems in Syria.

I would also like to recall that Strelkov-Girkin is a retired FSB colonel and has experience in participating in conflicts in Bosnia and Transnistria. And Dubinsky-Petrovsky is the major general of the GRU special forces. People trained and adequate, at that time being the top military leadership of the DPR, so expecting from them that they would be allowed to use an incomplete Buk against a certain aircraft flying at an altitude of 10 thousand meters would be open disrespect for them.

Thirdly, we will take into account that not far from the crime scene similar Buk complexes of Soviet production, belonging to the Ukrainian army, were deployed. I don’t want to blame the Armed Forces of the Armed Forces for the intentional destruction of the Boeing, so remember that there is already a precedent for accidentally knocking down a civilian airliner by Ukrainian anti-aircraft gunners. As of 2014, the air defense system of the Armed Forces hardly boasted a high level of training and coherence.

So, with two key questions - the motives and the ability to bring down the Boeing by the militia - nothing is intelligible. Nobody is obviously ready to ask them in the West yet. Therefore, in the Netherlands, quite unexpectedly, five years later, they raised the question of how the flight from Malaysia ended up above the combat zone. The Dutch MP, Michil van Nispen, bluntly stated:

There is no clarity regarding the role of Ukraine, although this country was supposed to close airspace.

Foreign Minister, Steph Blok, joined the majority of the House of Representatives of the Dutch Parliament on the need to clarify the role of Ukraine in the MH17 air crash.

An amazing change in position. But why did it happen right now, five years later?

It is likely that the answer must be sought far beyond the ocean. In the US, presidential elections will soon be held. Trump's only real adversary is Joe Biden, a Democratic candidate. The Maidan of 2014, the death of Boeing, the corruption of Biden Jr. occurred in Ukraine under the Democrats. Now all these dark affairs of the times of the previous administration are beginning to rise and be revised in order to “bury” Joe Biden in the political sense of the word. Therefore, Amsterdam suddenly woke up, wishing to clarify the role of Kiev in the deaths of its citizens.

And you look, they will start asking questions about the motives of Strelkov-Girkin and Dubinsky-Petrovsky to shoot down the Boeing. The most interesting thing is that something new can really come to the surface, since President Zelensky is in no way personally connected with the events of 2014, so he can completely help to “bury” his predecessor Petro Poroshenko completely.

We are in Yandex Zen
It's important
8
Ukraine from the inside: traitors, curators and those who watch from the Kremlin
Ten "defeats" of Putin
Reporterin Yandex News
Read Reporterin Google News
7 comments
Information