October 3 2019
20
Faced with the systemic opposition that the United States and its “avatars” in the EU have to Russian pipeline projects in the European gas market, Gazprom is forced to look for alternative markets in Asia. The most natural seems to be an attempt to gain a foothold in the PRC, with which our country “seems to be friends”, and the United States “is at war”. But, alas, not everything is as simple as we would like. In the Chinese market, Russian gas may collide with Chinese gas. 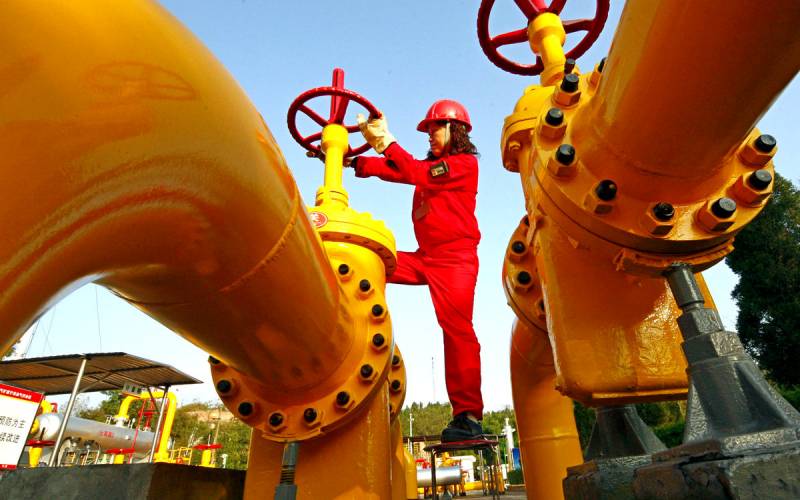 Celestial, this locomotive of the world economics, consumes more and more oil and gas from year to year. It produces some of the gas itself, imports the rest from Turkmenistan, and actively purchases LNG from various suppliers. Gazprom analysts estimate that in the near future, the consumption of “blue fuel” by China alone will be equal to the united Europe, amounting to 750-780 billion cubic meters per year.

The domestic monopolist plans to enter this promising market through the construction of gas pipelines from Siberia. A plus to these projects is the fact that there are no problems with transit countries, as is happening in the European direction, where it is so easy to insert sticks into the wheels. Unfortunately, this is where the positive ends.

At first, the Chinese authorities estimate their growth in gas consumption is much more modest than the specialists of Gazprom. In 2017, the gas industry development plan for the next 20 years was published, which indeed envisages an increase in consumption by an impressive 76%. But in numbers this will amount to “only” 347 billion cubic meters, that is, almost half as much as Gazprom’s analysts drew.

Secondly, it is very likely that Beijing, in the very foreseeable future, will be able to provide its own domestic increased consumption of “blue fuel”. The fact is that China itself is the owner of the richest shale gas reserves in the world, which exceed the assets of both the USA and Australia combined. About 1,06 trillion cubic meters of shale gas are concentrated at the depth of the Sichuan depression. Geological exploration with enviable regularity is increasingly increasing Chinese oil and gas reserves.

There is one “but.” Shale production in the Sichuan basin began in 2016 with the help of BP, however, it remains very modest. The reason is extremely difficult geological conditions. Minerals are located at a very great depth, over 3,5 thousand meters below sea level. Standard technology hydraulic fracturing does not work there. In addition, there are problems with the densely populated Sichuan province, which, however, can be solved if desired.

They don’t intend to sit like hounds on such wealth in Beijing. Developments in the field of oil shale mining technologies under extreme conditions have long been underway. For example, the technology of the so-called “energy core” was developed at Xi'an Transport University. The generated powerful electric current will have to create a shock wave similar to hydraulic fracturing and can be used at extreme depths. Sichuan University professor Chen Rong voices China's ambitions:

A technological breakthrough could trigger a new “shale revolution”.

If this or that method works, the energy market in Asia, and with it the whole world, will completely change. Financial analyst Artem Deev comments on the possible situation:

Today, China - one of the largest consumers of gas - has a chance to diversify its gas imports and create price competition between sellers to the detriment of them, but in favor of consumers.

In aggregate, what has been said means that Russia has long had time to accelerate from the "pipe economy" to a production, high-tech one. Otherwise, in the medium term, you can naturally remain at a trough with half empty expensive pipelines.