The US has nothing to bomb Russia. And I would like to ...

October 1 2019
24
As the saying goes: whoever hurts something, he says that. Recent public speeches by senior officials of the United States Air Force eloquently show that their soul is out of place mainly because the military branch entrusted to their command does not have sufficient forces and means to launch nuclear attacks on our country and China. The directly harrowing details they provide, of the miserable situation in which the US strategic bomber aircraft found themselves today, could perhaps be pitied. If it were not for a clear awareness of the fact, what exactly are the plans hatched today at the Pentagon and the White House regarding Russia. 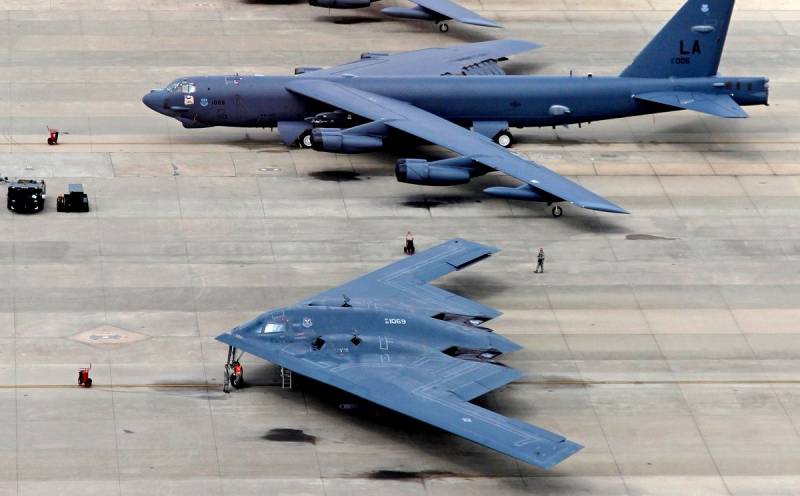 “The condition is worse than ever ...”

Statements, which we will discuss below, were made during the aerospace conference held by the US Air Force Association. The tone was set by none other than the head of the Strategic Command of the US global strike forces, General Timothy Rey. According to this senior military official, the United States needs at least 225 strategic bombers to “effectively confront Russia and China”. Today, their number (and even that is purely nominal), alas, is only 156. The General claims that the quantity he called was not taken from the ceiling at all, but was removed by means of “special studies”. So to find out how the topic of these studies sounds? “What is needed to not leave a single Russian or Chinese alive?” Well, something like that, probably. The experts in the field of military aviation gathered at the conference vied lamented that today the country's strategic bomber fleet is in a terrifying situation. It is no secret to anyone that the V-52, V-1 and V-2 combat vehicles that make up its foundation were created in the last century. Moreover, their content and technical the service also leaves much to be desired.

According to the mid-summer of this year, for example, out of the available 61 B-1B Lancer bombers, only six are suitable for combat missions! That is, less than one in ten. Lieutenant General David Deptula cut the truth of the womb with the directness of a retiree, who already, in fact, has nothing to lose. He bluntly stated that because of “chronic underfunding and inadequate resources for the past two decades,” the US Air Force has turned a hell of a thing. They, according to Deptula, are not just “out of date”, but in general “are in the state of least combat readiness in the entire history of their own existence.” Just think - during the years of the Cold War, the American army had 401 bombing squadrons of "strategists", and now only 312. Shame! However, at this place, Heather Wilson reassured everyone, until this spring, who served as secretary (minister) of the country's Air Force. According to her ardent assurance, by 2030 the United States will have at least 386 operational squadrons capable of “bringing democracy” to the whole world. Well, this lady knows better - the relevant decisions were made at a time when she was the one who led the department.


What are the Pentagon going to fill with these squadrons, which are available only in the project, if things are so lousy with the available military vehicles? Washington is betting, first of all, on the creation of the next “miracle of hostile technology” - the strategic bomber B-21 Raider. According to information voiced by the current head of the US Air Force, Matthew Donovan, they have already begun assembling it in the California city of Palmdale, where the 42nd plant of the US Air Force is located. The business is familiar to factory workers - it was there that the manufacture of B-2 Spirit bombers previously went. The creator of the new “superweapon” is Northrop Grumman, which in 2015 won a tender for its development and construction. It must be said that they managed to do the sketch design right there at the Stakhanov pace for the USA, and they are allegedly already working on the first copy of the combat vehicle. If you believe the general, Stephen Wilson, his first flight should take place already in December 2020 - from the factory, the aircraft should “fly over” to the Edwards air base, where its flight tests will be held in strict secrecy. So far, the work is moving on schedule and it is possible that the announced short deadlines will be met.

Of the latest weapons, it is clear, of course, extremely little, but some details still leaked. It will be executed, like its predecessors, using the technology of the “flying wing”. The creators promise to make the B-21 "virtually invisible to radar," and, accordingly, almost "invulnerable." Well, we already heard that, it seems. Something there was burning on the land of Yugoslavia ... It was also “invisible” - until the ground crashed. Naturally, no one hides that all the "stealth modifications" of the bomber are "an answer to Russian S-300 and S-400 air defense systems." Which once again confirms the speculation as to who this aircraft is actually preparing against. No less characteristic is the fact that Raider was initially “sharpened” precisely for nuclear strikes. According to the developers, he will immediately receive “all the necessary systems and software” for this purpose. True, at the same time, for some reason, it is stated that for carrying nuclear weapons the aircraft will be certified only “several years after being adopted”. Here it is somehow hard to believe. With great difficulty, given that the initial order for this combat vehicle, already received from the Pentagon, according to reports, is 100 units.

While the future of the US Air Force’s “wunderwaffe” is being forged at a rapid pace in sunny California, repairs and modernization of the “old horses” - B-52 Stratofortress bombers - are in full swing in Oklahoma. Let me remind you that the first of the combat vehicles of this series took to the air in 1951, and they were put into service four years later, and were produced until 1962 (in any case, it was then that the last B-52 was put into the army). A total of about 750 such aircraft descended from the conveyors. Accordingly, today their average age is 55 years, but at the same time, the "grandfathers of American bomber aircraft" are still quite awake and deadly. Two dozen cruise missiles, which, for example, can carry the latest modification - B-52H, this is no joke to you. Now there is not only routine maintenance of these machines, but also their significant modernization. For example, Raytheon, according to an order received from Boeing Corporation, is developing for the B-52 a fundamentally new radar station with an active phased antenna array. In fact, this class of equipment is now used on aircraft of the F-15E Strike Eagle fighter-bomber level, but here they decided to "be generous" for five-minute antique bomb carriers.

There are very serious reasons for this. According to reports, it is not the “oldies” who are going to exclude from the composition of bomber aircraft and replace the expected B-21 Raider at the Pentagon, but much newer models - the B-1 and B-2. As mentioned above, the vast majority of the B-1B Lancer by now have turned into practically unrepairable trash. No, it is theoretically possible to bring them “to life”. But, having calculated the cost of this procedure, the financiers of the American military department were in panic. This is just the case when the option “paint and throw away” seems to be the most realistic and rational. New bombers will definitely come out cheaper! With the B-2 Spirit, the situation is even sadder. As it turned out during operation, the "stealth coating" of this "miracle of technology" is mercilessly devoured by the action of the most common ultraviolet. Simply put, it melts under the rays of the sun. It’s not just a plane, but some kind of Snow Maiden ... To maintain a bomber in a combat-ready state, he must be in a special hangar, where he has to create a special "microclimate", which is necessary for this terribly capricious "sissy". Airbases capable of fulfilling such a whim, only a few units will be gathered all over the world. Well, and to whom, one wonders, is this needed, at a cost of over 2 billion dollars per unit ?!

Most likely, under real circumstances today, pilots of strategic bomber aircraft of the US Air Force will have to fly another 52-30 years on the B-40. This is no joke - according to reliable data, the corresponding decision to extend the life of the "old people" until 2050, or even until 2061, has already been taken by the Pentagon Air Command. Well, a centennial bomber, this is cool, of course, but somehow not very formidable - even with the latest radar. Given that the B-21 Raider is going, in the most optimistic version, to rivet 10-15 pieces a year, then something obviously does not add up with the amazing pace and volume of building up bomber squadrons.

At the same time, I can’t say what the state of the American “military power” is that upsets me at least a little. Crowning over him, General Timothy Rey, whom I mentioned at the beginning of our conversation, claims that the insufficient number of strategic bombers "puts the United States in great danger of an enemy attack." Excuse me, Mr. General, since when did the “strategists" suddenly become a means of protecting their homelands? In modern times, ballistic missiles (and now - hypersonic weapons), they will help you if something happens, like a dead poultice. No need to be cunning - all those hundreds of squadrons of bombers that you dream of creating are mainly just a weapon for delivering the first strike! It is very good that in the foreseeable future they will exist, most likely, exclusively in the sick imagination of the “hawks” from the Pentagon.

We are in Yandex Zen
It's important
16
Putin and Lavrov have done their job. General Shoigu, your way out!
Ten "defeats" of Putin
Reporterin Yandex News
Read Reporterin Google News
24 comments
Information