Chinese economic power: should we strive to catch up with China?

29 September 2019
26
Today, not Russia, but already China is the main rival of the United States of America in economic terms. Chinese business is actively entering Latin America and Africa, which Europe and the US have traditionally considered "their plots." At the shipyards of the Celestial Empire aircraft carriers are rapidly being built, the universally recognized “weapon of the aggressor,” which says a lot. Surprisingly, such a path from an agricultural country, China has passed in just 70 years. 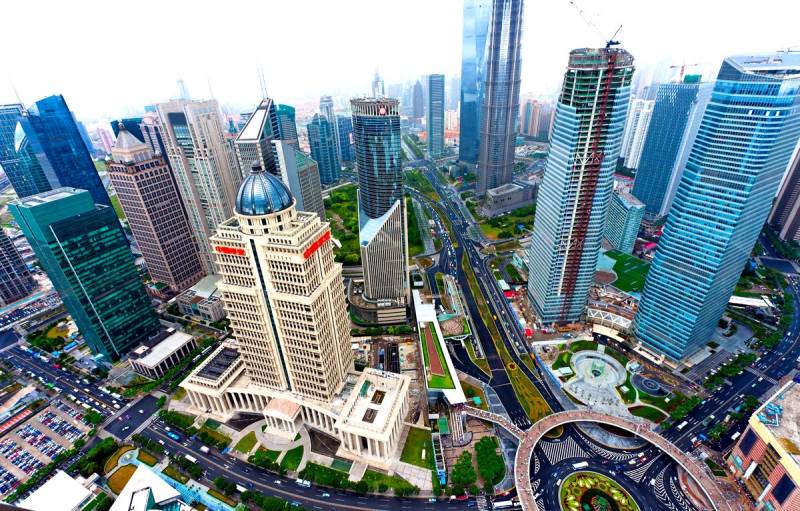 This round date of the formation of the PRC will be October 1. After the end of World War II, China was engulfed in a civil war. It was possible to end it only by 1949, with the active assistance of the USSR. The Soviet Union was the first country to recognize the emergence of the People's Republic of China. His further assistance was invaluable, admits the Chinese ambassador to Moscow, Zhang Hanhui:

China well remembers the assistance that Russia provided to us during the formation of the PRC. If there weren’t those 166 large industrial projects that Russia helped us implement, then perhaps China would have remained an agricultural country.

Indeed, it was the Soviet specialists who created the industry-forming enterprises in China, having made an impetus for turning the backward agrarian power into an industrial one. But then our paths began to diverge. Exposing the so-called "cult of Stalin" and denigrating the achievements of his period, N. S. Khrushchev de facto headed for the restoration of capitalism, culminating in the events of 1991. Mao Zedong did not approve of this, to put it mildly, which led to a serious cooling of relations between Beijing and Moscow.

The subsequent events of the periods of the Great Leap Forward and the Cultural Revolution, when China tried to take its own path to communism, are assessed very ambiguously. Due to voluntaristic experiments, such as artisanal steelmaking, and obvious “excesses,” such as the “war with sparrows,” a massive famine arose over the background of suppressing real problems, resulting in the deaths of millions of people. Western data in this regard is clearly overpriced, but domestic Chinese are impressive.

The "Cultural Revolution", which they try to reduce only to the struggle for power in the CCP and the attempt to "transit power" by Mao, went under the motto of the struggle against the restoration of capitalism:

Although the bourgeoisie has already been overthrown, it nevertheless, with the help of the exploiting old ideology, old culture, old customs and old customs, is trying to decompose the masses, win the hearts of people, is striving hard for its goal - the implementation of restoration.

As subsequent events showed, these fears were not groundless. In 1976, the prominent statesman, Den Xiaoping, became the de facto head of the PRC. His desire to make China “open,” successfully coincided with the desire of the collective West to nurture a counterbalance from the Celestial Empire to the Soviet Union. All of these “people's communes” were abolished, and foreign capital gained direct access to cheap Chinese labor. The return of market elements has begun economics, and state control decreased.

In China, according to some reports, about a million foreign enterprises have been created, where the local population labored for symbolic money. The economy received over two trillion dollars of foreign investment. The de facto restoration of capitalism that Mao feared, while maintaining the communist paraphernalia, took place. Like any phenomenon, this had mixed consequences.

On the one hand, China has made a powerful economic breakthrough, having managed to become a leading power capable of challenging the United States itself. Celestial China now has not only developed agriculture, industry, but also science and high-tech industries. Average per capita income and life expectancy have grown, modern cities and wonderful roads and railways have been built.

However, this capitalist paradise has a downside. China introduced a market economy, but naturally received enormous social stratification among the population. Economist Leonard Wei from Taiwan comments on this as follows:

Chinese socialism has turned into "wild capitalism" - the fashionable restaurants of megalopolises are crowded, people are throwing money, while others have nothing to eat. Like in Ancient Egypt - there the top, led by the pharaoh, bathed in luxury, and millions of silent slaves erected pyramids. 0,4% of Chinese people control 70% of national wealth.

For example, China is in first place for the construction of new housing. Their "ghost towns" are widely known, smelling of fresh paint and almost empty. The reason is simple: most Chinese simply cannot afford to buy an apartment in them. Instead, many laborers have to live in boxes or "iron cages", separated by mats, with an area of ​​several square meters per person.

Due to overpopulation, Beijing introduced a birth control program, "one family - one child", and for the second it was necessary to pay an increased tax. The rural population cannot afford it, therefore, at the birth of their second and subsequent children they are not registered anywhere at all, presenting to their neighbors as "nephews who came to stay." From the point of view of the state, these numerous “nephews” are real “shadow people”, since they are not registered anywhere, do not receive education and become absolutely powerless labor. Currently, the program is slightly relaxed, and it is allowed to officially have two children.

In general, the “Chinese miracle” has a price.