27 September 2019
26
Everyone is talking and writing about a Swedish girl who, in the shortest time, has turned from a “problem” teenager skipping school to world newsmaker No. 1. “Who is she?”, “What is the reason for her enormous popularity?”, “What is the essence of her demands, which, before our eyes, are becoming almost the basis for a new world religion?” - front pages, screens and news tapes of the world media. 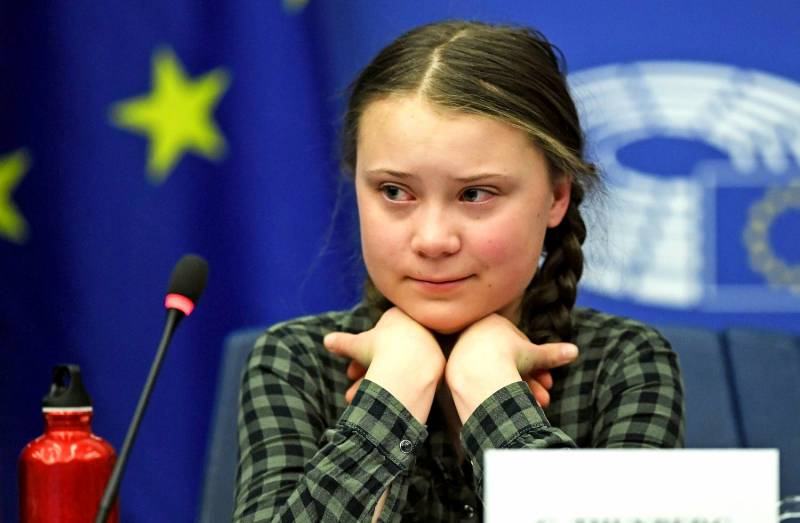 And, alas, it’s much less likely to talk about more serious, fundamental things: about what forces really stand behind the suddenly flashed bright star of the “environmental Joan of Arc of the XNUMXst century” and what, in fact, they achieve, as in the short term, so in the long run.

From Friday Protests to UN Tribune

Doubt even for a second that Tunberg has ceased to be a “thing in itself” from a certain moment, and has turned into someone’s special operation of global proportions at the current stage of development of events, can only completely complete idealists who manage to not notice obvious things, see and recognize that they simply do not want to. Going Greta to the parliament of Sweden with a home-made poster - it was still a riot of a loner against society. Although ... The girl came out on her first “protest” on August 20, 2018, and exactly three days later the book of her parents, Malena Hernman and Svante Tunberg, “Scenes from the Heart” (Scener ur hjärtat) went on sale, which told about the life of a family with children having abnormalities in mental health. And of course - “a little about ecology”. That is, by the time of the first public “happening”, the future bestseller was already not only written, but also printed. Waiting for your time? It should be borne in mind that both Greta's father and mother are people who are far from alien to show business and PR. Svante is a screenwriter, actor and director. Malena is an opera singer, who, however, abandoned her career after her daughter's "insight". Not a worker-peasant origin in a girl. Not at all ... We believe in a coincidence, which the Thunberg elders and their daughter stubbornly repeat. By the way, they assure the public that the appearance of a teenager, a well-known Swedish public relations activist and eco-activist, Ingmar Rentzog, who was in the company of a photographer who absolutely absolutely stumbled there, also appeared near the quietly sitting with his slogan “School strike for climate” slogan. nothing but a completely unbelievable combination of circumstances.

With Rentzhog, who completely shamelessly used Greta as a live advertisement for his own “environmental startup” We Don’t Have Time and raked at least a million euros on this business, the Tunbergs eventually “broke the pots”. They supposedly didn’t know about his gesheft, they advocated and advocate exclusively “for the idea”, and all the fees for the book instantly sold out in huge print runs and translated into several languages ​​were donated to charity. Ecological, mainly. Well, the fact that on the covers of her subsequent editions the name of Greta herself appeared from somewhere as an author was ... That ... The oversight of the publishers, here! Apparently, at the first stage, girls were engaged in “promotion” of crooks of not too high flight. However, things have changed from the moment when her hashtags #Fridaysforfuture and #Climatestrike on Instagram became the sources of the “viral” video, which was gaining millions of views. When hundreds, thousands, and then hundreds of thousands of schoolchildren and students, who followed the idea of ​​Friday absenteeism “under the ecology”, even liked it in 300 cities of the world, following in her footsteps in different countries. It was here that forces came into play, the purpose of which is to manipulate the consciousness of millions and millions of people. Instantly, in fact, a “breakthrough” from sad sitting on the priest at the walls of his native Riksdag to the stands of the UN and the Davos Economic Forum, to meetings with world leaders whom she undertakes to report and teach, and they are forced to stand in front of her almost at the same time ... Do you still believe in coincidence and chance?

Who benefits from Russia

You can’t say that the version on the topic: “Who uses Greta?” not really discussed. Fortunately, healthy skepticism still remains in some. True, the options in the process of this discussion are often put forward, frankly, ridiculous. Well, for example, the assumption was voiced that the girl was “driven” by electric car manufacturers. Or, for example, solar panels. Or maybe some other businessmen from the "green energy"? Gentlemen, everything is passing by! Not that scale, not that scale. Here, the thing smacks of global intent, a “new world order” and an attempt on the foundations and foundations. Here, as the unforgettable Ostap Bender said, “one feels the paw” if not of Soros, then of a figure (or figures) of no less caliber. Well, Soros, this, in fact, is not even a hunch, but a statement of fact. Characters from his “open society” and structures associated with this office continue to wind around the militant Greta. However, as usual, when implementing projects of a similar level and scale, true puppeteers will most likely remain in the shade, no matter who they are. Let us ask ourselves another question so far: about the goals pursued by the force that lifted an unhealthy teenager with an ecological “fad” to the top of the world popularity. The first of the obvious conclusions is the sewage system of youth (and not only) protest, which has recently torn apart some countries of Europe. And also the diversion of public attention in the same Old World also from the problem of migrants. Let it be better to jump "for the climate." Or against? One hell ...

However, this is too small. Suitable as part of a global plan, but not as its main goal. Let's try to think wider. Against whom is fierce now economic and geopolitical confrontation West? That's right, against China and Russia. Yes, in a hypothetically conceivable case of the realization of the crazy calls of the vicious "environmental messiah" for a complete rejection of fossil fuels (including its production and transportation), "flashing" the entire world economy with renewable energy, sending to the landfill History of "environmentally harmful" aircraft coupled with cars, and similar things, and the United States, too, will not seem enough. 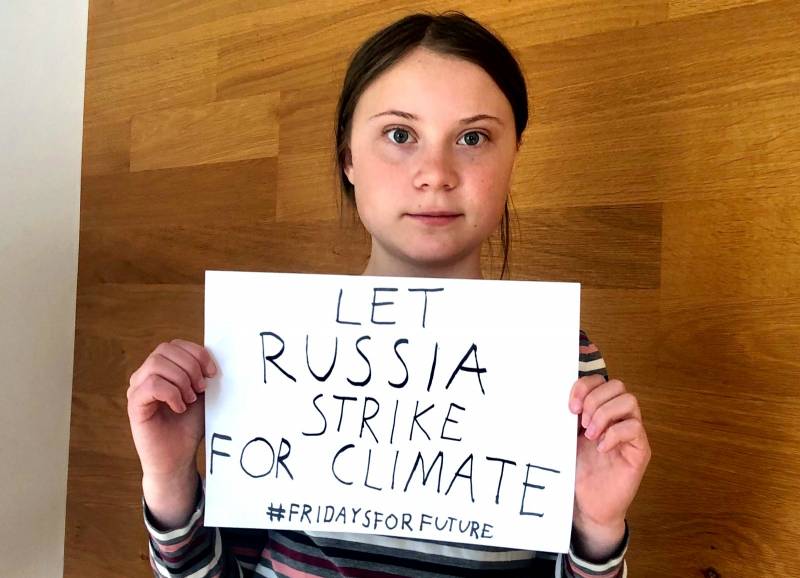 As a matter of fact, a large part of the entire world’s population expects a rewarding “rollback” of commercials in the XNUMXth century ... But what in this situation expects, say, Saudi Arabia, Venezuela, Iran, and Russia, whose economy is based on those very hated Greta and her foolish followers “ fossil fuels? Or being the “workshop of the world" - China? India, stubbornly trying to "catch up" to its level? But they will most likely plunge into the Stone Age. And naturally disappear with political maps of the world, and indeed from the face of the Earth. Is this the main goal of the project? There is, by the way, one more version, directly, however, docking with what I voiced above. Seeing that the world is inexorably “sliding” towards the global economic crisis, which is likely to have unprecedented proportions and severity, someone decided to push it a little in this direction with the help of modern “environmental” Luddites. And what? Arranging another world redivision on the wreckage - that’s it ...

Good intentions - the route does not change

On the other hand, if the implementation of such large-scale scenarios may well be the strategic goal of the total "ecological madness" that began with Greta, then our country may feel the consequences of the tactical moves of its puppeteers in the very near future. Why should Western leaders not sign some kind of "Pact on saving the Earth" and, in accordance with it, not impose absolutely deadly economic sanctions on the main "environmental destroyers"? Do not finally ban the construction of "Northern Ptok-2" (transportation of fossil energy resources!), Do not block the Northern Sea Route? Emmanuel Macron has already announced France’s refusal to use it - and precisely because of "environmental" considerations ... And the European Commission began to seriously discuss the "introduction of direct taxes on hydrocarbon energy" and the like. "Turn green," bastards, in front of our eyes ... Why, finally, not declare a general boycott of Chinese goods, the production of which, these damned commies destroy our planet ?! That's the way to do it. And then Greta will come - but shit! Does all of the above seem silly to you? Well, your will. Adolf Schicklgruber, too, was a funny jerk, gulping around the pubs, until really serious people started investing in him. The speed and power with which our world is seized by the epidemic of insanity, the start of which was given by a small autist from Sweden, inevitably makes us take this process with all seriousness. Until it's not too late.

In particular, the inhabitants of the country, whose president, speaking of calls for abandonment of nuclear energy and modern fuel to “alternative energy sources”, compares them with the desire to “relocate to the caves and put on skins,” think in particular. Donald Trump, at the UN headquarters, Greta just burned with a hating look. Vladimir Vladimirovich, after such words, I'm afraid I would try to bite. Unfortunately, Tunberg already has all the signs of a messianic complex. She recklessly declares her own "gift", "superpower", "special abilities" and the like. Well, and her mother easily “flashes” revelations to numerous interviewers that her daughter “can see carbon dioxide with the naked eye”. And ... Yes, in Sweden there were already some sectarians who proclaimed Greta "the successor of Christ." Forgive me, my God ... Worst of all, this insanity in an unhappy (whatever Trump claims there) and teenager mercilessly exploited by cynical manipulators, the "mighty of this world" support and inflate with all their might. The prestigious Golden Camera Award, the Alternative Nobel Prize, the title of “Ambassador of the World” from Amnesty International and “Women of the Year” in their native Sweden. Endorsement by Obama, Schwarzenegger, Merkel and even the Pope. Next in turn, apparently, is the real Nobel Prize and the announcement of Thunberg “the most influential woman of 2019”. I won’t be surprised if this is how it will be. The main thing is that on the way the little girl does not meet any new David Chapman, who won the "glory of Herostratus", discharging the revolver in the main "Beatle". Still, almost a child, let him live ...

Drawing parallels for Greta Thunberg with the affairs of bygone days, it would be more appropriate, in my opinion, to mention not the "Orleans Virgin", but her fellow countrywoman, Stephen’s shepherd, in 1212, after the "revelation" allegedly revealed to him by Jesus himself, which entailed their peers for the liberation of the Holy Sepulcher. So began the nightmare, today called the "Children's Crusade." It was a story ... The madness that swept France, and then Germany, ended not only with the thousands of children's corpses that remained on the snowy passes and trails of the Alps. The snotty “crusaders” who reached Marseilles managed to plunge into the ships, “kindly” provided to them by local merchants with the characteristic nicknames “Iron” and “Pig”. As it turned out later, the luckiest were those who were on two ships that crashed off the coast of Europe. They just drowned ... Passengers of the other five ships were kindly waiting for the slave markets of Algeria and Egypt. Enterprising merchants agreed on everything in advance and sold “living goods” in bulk before loading in Marseille. Only one of those who sailed from there returned home. In my opinion, the companions of Thunberg, regardless of age, should be a little distracted from the environment and study something on the history of medieval Europe.