"I did not expect": trump substituted Zelensky in the face of Europeans

26 September 2019
5
President Vladimir Zelensky got into an awkward situation because of the "big brother" in the person of Donald Trump. The U.S. president published a full transcript of their telephone calls to clear congressional charges and possible impeachment. The “servant of the people” itself, the promulgated “secret diplomacy,” did not put in the best light. 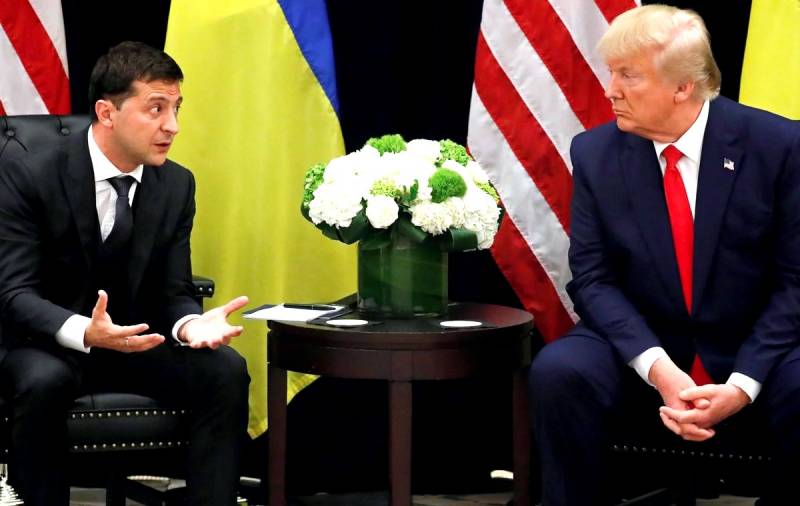 This conversation took place a few days after the formation of the Verkhovna Rada in Ukraine. President Zelensky received a majority in parliament, giving him the opportunity to determine the composition of the government. The big bonus was that “the man” became the prosecutor general, which Vladimir Alexandrovich hastened to share with his senior comrade from the White House.

For Donald Trump, the Ukrainian direction has now acquired unexpectedly great importance. Joe Biden, former vice president during Obama’s time, could be his main rival in the next year’s presidential election. The then second person in the United States oversaw post-Maidan Ukraine, where this story arose with an openly corrupt soul that could put an end to his presidential ambitions.

The son of Joe Biden Hunter after Maidan, in 2014, got a job in the largest Ukrainian gas producer Burisma Holdings. The place is warm, the directors are the ex-president of Poland, Alexander Kwasniewski, as well as the ex-head of the CIA counterterrorism center, Joseph Kofer Black. The appointment of the son of the US vice president to a managerial position in such a company, while his father mercilessly eradicated corruption in Ukraine, did not go unnoticed due to a clear conflict of interest.

In addition to the official salary of $ 50 thousand per month, Rosemont Seneca Partners, owned by Hunter Biden and his partners, received an additional $ 160 thousand per month. This is the little that the Prosecutor General’s Office of Ukraine managed to find out until its head, Viktor Shokin, was fired under pressure from Joe Biden.

Here is this fascinating story and asked in a telephone conversation with Zelensky to again begin to investigate Donald Trump. His political opponents claimed that he did this by exerting pressure on his Ukrainian counterpart by cutting off funding for the Ukrainian Armed Forces, but nothing of the kind came from the transcript of the negotiations. He said only the following:

There is a lot of talk about Biden’s son (Hunter) ... Many people want to know about it, so if you can do this (consider this case) with the attorney general, it would be great.

And no threats. Thus, Trump himself was able to "launder", but his interlocutor "got a little dirty." Considering the conversation confidential, Vladimir Alexandrovich pledged his colleague to President Macron and Chancellor Merkel:

Vladimir Zelensky made a statement from which it follows that he did not expect the full version of the conversation with Trump to be published. That is, he agreed to help a colleague from the White House, but without further details. Well, you can understand it. Apparently, now Paris and Berlin will rush headlong to financially help Kiev.

We are in Yandex Zen
It's important
6
US hands Kiev to Moscow: Why Trump recalled the ambassador from Ukraine
Ukraine from the inside: traitors, curators and those who watch from the Kremlin
Reporterin Yandex News
Read Reporterin Google News
5 comments
Information