26 September 2019
3
This media could cope with tasks that the creators of Saturn 5 could not even dream of. 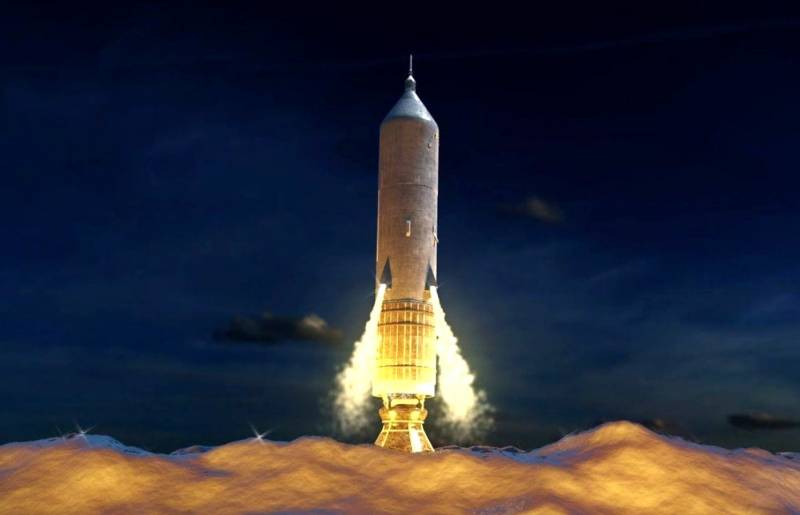 The sea is worried about times

The most powerful launch vehicle of the present is Falcon Heavy from the company Ilona Mask: it can put 63 kilograms into a low reference orbit, almost 800 thousand kilograms into a geo-transition orbit, and when flying to Mars, the payload can reach 27 tons. The promising American Space Launch System, depending on the modification, will be able to bring from 16 to 95 tons into a low reference orbit. Both of these missiles are losing in terms of this indicator of the old Saturn V, which the United States used as part of human flights to the satellite of our planet: the rocket is still the most lifting of all that mankind has ever built.

However, in the 60s, when the Cold War was in full swing, even this seemed insufficient. What was needed was a carrier that could deliver a very large spacecraft into orbit at one time, for example, an orbital station. It is important to note that already in those years, scientists were exploring the possibility of placing weapons systems in orbit.

So, in 1962, Sea Dragon appeared - a project of a super-heavy launch vehicle. According to data from open sources, the carrier could put a cargo weighing 550 tons into low Earth orbit. The project was led by a scientist, Robert Truax. Of course, the size of the rocket would exceed the wildest expectations: with a length of 150 meters and a diameter of 23, the Sea Dragon would become the largest of all launch vehicles. Even a distant comparison is enough to understand that Saturn V against the background of a promising medium was just a dwarf.

The most interesting thing was that the rocket was supposed to launch ... from the sea. Moreover, without any preliminary preparation: it could simply be delivered to the launch site with the help of watercraft and launched. For launch, a very large ballast tank had to be attached to the bottom of the carrier: this would allow the rocket to be kept upright until launch. It is also important that in this position part of the rocket was under the sea surface, and the load towered above the surface of the water. Due to this, it was easy to get to him from almost any ship.

However, the main reason for the chosen scheme lay elsewhere. Everything rested on money. For Sea Dragon, neither an expensive spaceport nor related infrastructure was needed. And not one of the existing cosmodromes at that moment could have stood it and melted from the powerful Dragon engines. Everything is different with water: the only problem was that it itself could damage part of the systems.

To avoid this, many important components would be placed at the top of Sea Dragon. In general, according to estimates, the costs of implementing the proposed launch scheme could vary from 60 to 600 dollars per kilogram of cargo, which is very small by "space" standards. 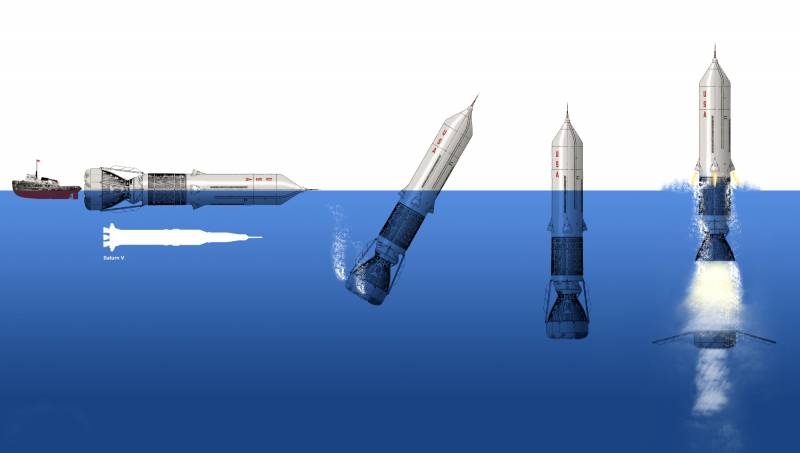 The design was based on the concept of Big Dumb Booster or "Big primitive media." It is based on the fact that the volume of the structure is proportional to the third degree of size, and its surface area is only of the second degree. Simply put, the rocket should have been as low-tech as possible (in the good sense of the word), and the increase in power should have been achieved by simply increasing the size of the carrier. Wherever it was possible to save, it was necessary to save.

Looking ahead, it is worth saying that the concept has not been embodied on any of the existing carriers, however, the trend to make rockets as simple and cheap as possible is clearly visible now. This Falcon 9, and promising Russian "Irtysh", and even a new rocket from Blue Origin - New Glenn. All of them can be considered as simple as possible: the only returning first stage is the exception. However, Irtysh is not concerned.

The basics of the concept are clear, but what was the medium itself? Technically, it was a two-stage rocket. They wanted to equip the first stage with one heavy-duty engine running on a kerosene / liquid oxygen fuel pair. There should not have been problems with fuel. The support ship, in which the aircraft carrier was to be used, was supposed to decompose water into hydrogen and oxygen by electrolysis.

At the heart of the second stage was also one super-powerful engine, with a thrust of 6 million kgf, running on liquid hydrogen and liquid oxygen. At the time of the shutdown of the engine of the second stage, the rocket reached an altitude of 230 kilometers. The first step was supposed to be splashed 300 kilometers from the launch site: scientists were exploring the possibility of its reuse. 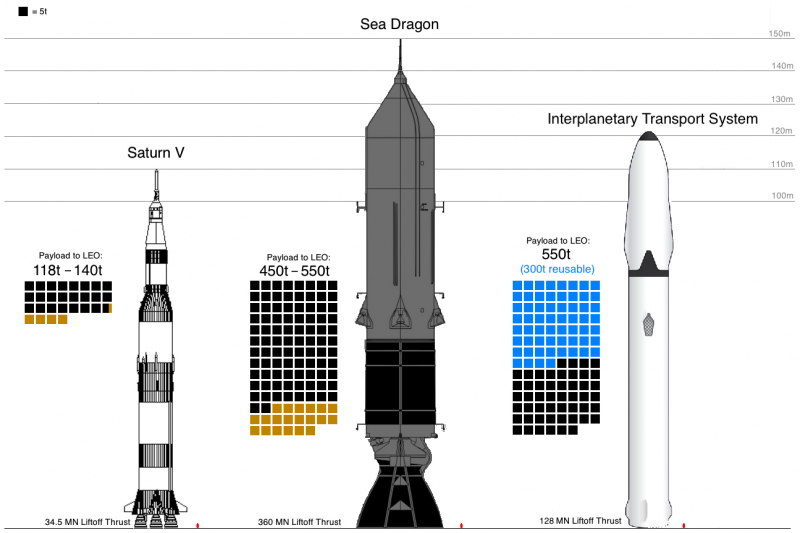 They wanted to make the missile hull from alloy steel seven millimeters thick; it was no more complicated than the submarine hull in production. Actually, the rocket was supposed to be produced at the shipyard: the project was even considered by the shipbuilding company Todd Shipyards, believing that it would be able to fulfill its task.

However, the decision to start production is not made by engineers, but by people who are higher. And at a certain stage, they found Sea Dragon too expensive to implement. Lack of money led to the fact that it was necessary to close the entire department involved in Sea Dragon and manned missions to Mars.

This is not surprising: by the mid-60s, the United States was actively preparing for the launch of man on the moon. For all programs, money would simply not be enough. Information on the total cost of the Apollo program was revealed during a hearing in the US Congress in 1974 - the lunar program cost American taxpayers $ 25,4 billion: experts estimated that, taking into account inflation, this amount in 2008 was equivalent to approximately $ 163 billion .

Could a promising rocket be used to launch a person into space? In theory, yes. But for launching astronauts, Sea Dragon was, firstly, redundant, and, secondly, insufficiently tested. Still, space rockets from ground-based cosmodromes at that time launched more than one year, which could not be said about sea spaceports.

In general, there were almost no goals and objectives for such a large and powerful rocket. So, in many ways, the Sea Dragon became the embodiment of the illusions of the 60s about man conquering the solar system. And not only. The same problem now faces other superheavy (of course, not so powerful carriers), which, if needed, are only to complete several starts in a year.
Ctrl Enter
Noticed oshЫbku Highlight text and press. Ctrl + Enter
We are
From the Volga to the Yenisei: the most powerful missiles of the future
American super-rocket BFR: too good to be true
Reporterin Yandex News
Read Reporterin Google News
3 comments
Information
Dear reader, to leave comments on the publication, you must sign in.