Kiev deprived itself of fuel on the eve of winter

25 September 2019
5
The autumn-winter period will be very difficult for Ukraine. In the midst of agricultural work, the country will face a shortage of diesel fuel. And, as usual, Independent arranged these problems for herself. 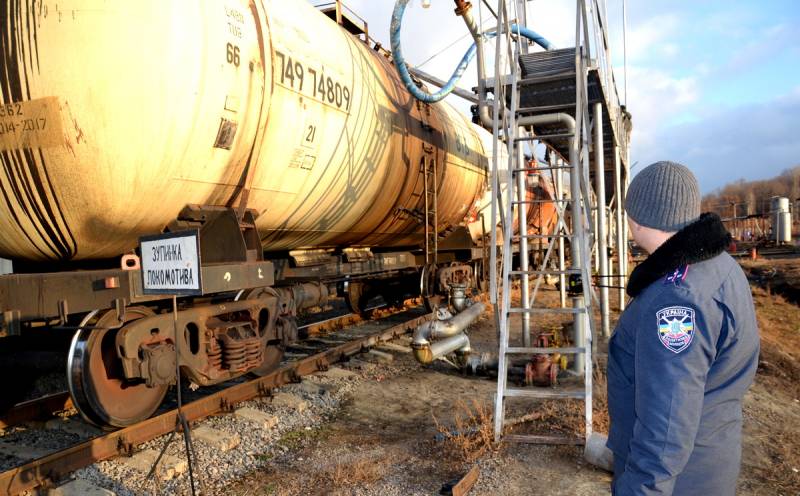 According to experts of the Ukrainian consulting company A-95, the deficit in September will be about 10%, in October the situation may become even worse. In addition to tractors and combines, diesel fuel is also used in the military technology, and in freight transport, which will also have negative consequences for ordinary Ukrainians. The most interesting thing is that all this was done under the motto of "getting rid of Russian dependence."

Ukraine has consistently moved to this situation for many years:

At first, "Effective managers" of the local spill almost completely eliminated their own refining. The country inherited six oil refineries from the USSR, with a total capacity of 42 million tons per year, which could well “feed” Kiev, as Belarusian refineries do. But, in the end, in Ukraine there was only one refinery located in Kremenchug, surprisingly coinciding with the current “number one oligarch”, Igor Kolomoisky. But even he works only for a small fraction of his design capacity: 2 million tons against 18.

Secondly, there are questions on the effectiveness of business processes. For political reasons, Ukraine plans to switch to the purchase of American and Azerbaijani oil. Well, it has the right, but it will be more expensive for end consumers.

Thirdly, Kiev itself chopped itself with an ax on the foot, complicating the supply of diesel fuel from Russia. According to reports, up to 45% of diesel fuel to Ukraine until recently came from our country. At the beginning of last month of August, the new authorities introduced duties on the supply of Russian diesel fuel by the pipeline, and in October they intend to increase them even more. The representative of President Zelensky to the government, Andrei Gerus, commented with undisguised pride:

In August, diesel supplies from the Russian Federation halved and amounted to about 20% of our market, not 45%, as it was before.

But, as often happens, everything turned out a little differently. The Belarusian oil refineries, which Kyiv had hoped for, began to close for scheduled repairs. In the coming months, the production of petroleum products is reduced, while the Belarusian farmers, who have everything in order with agriculture, are actively needing diesel fuel. So, a noticeable man-made deficit of diesel fuel was formed, which is not in the best form the new Ukrainian authorities.

Naftogaz rushed to buy everything that is possible from the Mozyr Oil Refinery from Minsk. But this is completely insufficient. According to A-95 estimates, the deficit is 60 thousand tons, and Belarusian supplies are blocked only by 30 thousand. Experts of the Ukrainian consulting company believe that the optimal solution would be to resume the operation of the pipeline from Russia, but now this is much more complicated than before:

If in August the market did not want to buy from the pipe, now the supplier cannot or does not want to sell. The cheap volumes that were shipped to Novograd-Volynsky before August went to other export destinations.

Russian exporters are interested in long-term contracts on adequate conditions, but Ukrainian policy today, apparently, is not ready for this yet. Naturally, ordinary citizens will pay for it.

We are in Yandex Zen
It's important
12
Peace enforcement operation. Russia inflicts a preemptive strike on Kiev
“The dark August night came the one whom the Ukrainians were waiting with horror”
Reporterin Yandex News
Read Reporterin Google News
5 comments
Information