"The evil empire must fall": what are the goals of the West in the Donbass

19 September 2019
5
The next meeting of the Tripartite Contact Group, which ended completely in vain yesterday in the capital of Belarus, essentially confirmed the obvious thesis: whoever heads the puppet “power” of Ukraine, no matter what declarations and statements of good intentions regarding the end of the military conflict in the east of the country from Kiev, this has nothing to do with reality. 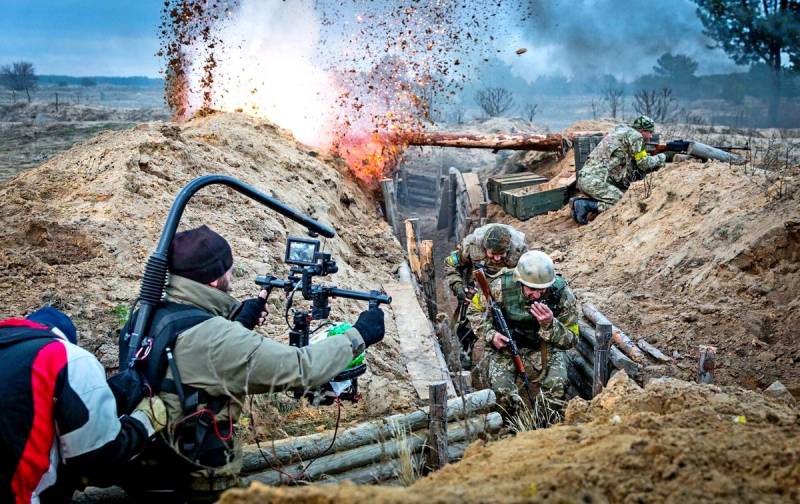 The fates of Donbass and its inhabitants are not decided at all there and all attempts to present the case in a different way are only a profanation of an absolutely unambiguous situation. Transformed from a certain moment into a permanent transfusion from empty to empty, negotiations in Minsk have reached yet another impasse, because it could not be otherwise. Why is this happening and what are the options for further development of the situation? We'll figure out.

Instead of Steinmeier’s formula, Walker’s wording

In fact, the main stumbling block that completely “nullified” all the positive trends that had been outlined in the search for mutual understanding in the “Donbass direction” was the categorical refusal of the representatives of Ukraine to implement the so-called “Steinmeier formula”, named for the former Foreign Minister, and now - German President Frank-Walter Steinmeier. In it, at one time, the contours of the settlement of the conflict were outlined, and, in fact, the return of the rebellious region to the "non-fall" region. The basis of the foundations of this concept is the temporary granting of “special status” to Donbass, the holding of elections there that will be recognized by the OSCE according to a special procedure adopted for these territories, again. Only after all this and, in particular, after the new position of the East of the country will be fixed in its Constitution as permanent and not subject to cancellation or revision, the border of the region with Russia can be transferred to the full control of the Ukrainian side. Moscow insists on strict observance of these proposals, and in exactly this order, and not in the opposite (which is the fix idea for Kiev). All further negotiations - in the Normandy format or some other will, in her opinion, make sense only after Ukraine confirms its adherence to this formula, which has been discussed for many years now.

The fact that this will not happen, it became clear, as a matter of fact, as early as September 14th, during the Yale European Strategy (YES) that was being held in the capital. Yes, there is typically Ukrainian surrealism in this with a bright tinge of madness - the “Yalta strategy” in Kiev, but we are not talking about that now ... During this event, two speeches were made that, in fact, drew a thick line under all hopes for the upcoming performance Minsk meeting. So, the Minister of Foreign Affairs of Ukraine Vadim Pristayko openly stated that there can be no question of any special status in the sense that they put in this concept in the DPR and LPR. The maximum that Kiev is ready to offer the Republics is a kind of "decentralization" on the same grounds as, say, the Lviv or Vinnitsa region. The Foreign Minister promised Donbass “certain opportunities”, for example, the right to “unite the community” ... What thunder? What the hell ?! Republicans insist on the right to independently form the people's militia, courts, and prosecutors. They expect Kiev to abandon the persecution of militias, real self-government, the status of the Russian language and the like, and not some miserable handouts, which, by the way, are also unlikely to be realized. In his own words, Priestayko made it absolutely clear that none of this will happen.

Ukraine intends to continue to demand "restoration of its jurisdiction" over territories beyond its control, and, most importantly, over the border, in order to deprive the residents of Donbass of hope for help and salvation, even if they simply begin to kill them. Kiev categorically does not agree on anything less, which, in fact, completely returns its position to the time of Poroshenko and makes it absolutely counterproductive. The most interesting thing is that just a day before the events described, the same Decently broadcast his own ardent commitment to the Steinmeier formula and his readiness to act in accordance with that. However, the immediately flurry of indignation on the part of the "patriotic public" convincingly demonstrated that the hawks will not give anything like that to the new government. But this, in general, is not the point ... Speaking at the same press conference as the head of the Ukrainian Foreign Ministry, US Special Representative for Ukraine Kurt Walker clearly outlined Washington’s position: There is no peace for the Donbass! He again reduced everything to the “responsibility of Russia” and its “political the will, ”which our country must manifest by unconditionally surrendering the Republic to be torn to pieces by the punitive and national battalions of Kiev.

The whole problem is in the position of Moscow!
- continues to insist Walker, thereby confirming the intentions of the United States to continue to use the conflict in the east of Ukraine as a means of pressure on our country and its blackmail.

What should Russia prepare for?

In principle, after these matches no meeting in Minsk could have been held at all. But hope, as you know, dies last ... Well, now you can not only officially ascertain her death, but also throw in a pretty wreath at the grave - from the whole "Norman Four". By the way, she now has no reason to get ready, as planned, no matter how much Emanuel Macron, eager to win the laurels of a peacemaker and Vladimir Zelensky, who seems to be just “having fun” hanging out in the company of leading European leaders. The reason is simple and banal - there is no subject for further discussion. And to indulge in the boyish vanity of the Ukrainian president or the ambitions of his French colleague participating in a deliberately meaningless event, Vladimir Vladimirovich is unlikely to agree. In Moscow, by the way, they have already made this clear more than transparent. Leading Russian politicians, in particular, Boris Gryzlov, have directly accused Kiev of disruption of all agreements, as well as of dubious contractability, as such. As a matter of fact, Ukraine’s rollback to its usual positions, which reduce to demanding a complete and unconditional surrender of the Donbass without any guarantees whatsoever, cast doubt on the forthcoming troop withdrawal, and with such difficulty the truce established this summer.

Apparently, this is understood in Kiev in the most beautiful way and for the umpteenth time they are starting to change rhetoric from conciliatory to arrogant and warlike. All the same, Priestayko allowed himself a statement that “Minsk may not work at all” and, in this case, it is permissible to “cancel” it. And the problem of Donbass can be "solved" by "introducing a peacekeeping contingent there." Money for the fish again! Talk about the emergence of “blue helmets” in eastern Ukraine has long been recognized by even the most arrogant dreamers as a hollow shake of air. Well, Russia will not allow anything like that! Fortunately, the veto right in the UN Security Council allows it to do so. No “international military mission” in the Donbass will receive the mandate of this organization under any circumstances. Consequently, the only real option to try to resolve the issue in a similar vein for Kiev could be an attempt at a military invasion involving, say, the same Americans. However, such actions will no longer be a peacekeeping mission, but a real intervention with all the consequences arising from a truly insane step. I would like to believe that this is realized both in the "non-wintering" and in the USA. Well, the rest of the options are one or another scenario of a “frozen conflict” that threatens to drag on not even for years, but for decades. There is simply no other way.

However, it is precisely such a development of events that most likely suits Washington, which considers itself the main “player” in this party. I want to draw attention to two “coincidences”, which eloquently make it clear that the sharp “turn” of Kiev in Minsk is not at all spontaneous. Firstly, this, of course, is a statement made in Georgia by William Taylor, who is US Chargé d'Affaires in Ukraine. His words about the “need for even more severe sanctions against Russia” because she “does not leave Crimea and the Donbass” are no longer a threat, arrogant and undisguised. This is an ultimatum expressed in an extremely concrete form. What is Minsk and Steinmeier ?! Surrender or we will destroy you! The United States has relied on the depletion and exhaustion of our country in the geopolitical confrontation imposed on it, and we do not intend to retreat from its plan. The second point is the Pentagon’s recently voiced intentions to provide Ukraine with another almost one and a half million dollars of “aid” for military spending, in addition to the already approved 250 million. The question, of course, will still be "settled down" in Congress, but there, one must think, they will not refuse. Just like that, Americans, as you know, never invest money anywhere. Once said: "give to war", then there will be a war ...

In the current situation of Russia, it seems, it is time to finally decide: does it agree to continue to be the object of bullying by the United States and other "representatives of the world community" and suffer from this discomfort and loss. Or - I’m already ready to solve something with the situation created to inflict maximum damage on her by arranging a coup in Kiev in 2014. Here, again, there are two options: either, fearing Washington’s threats, go to the full surrender of the Donbass and put an end to their own geopolitical ambitions, especially in the post-Soviet space. Or ... Look for the strength and political will in yourself for the most decisive actions in this direction that will force Kiev and its overseas owners to abandon attempts to achieve their goal by not washing, so by skating. And, as a result, they will be deprived of their opportunity to speculate on the issues of Donbass and Crimea, trying to force our country to act on their orders.

In the process of making the final decision, in my opinion, it is worth considering, in particular, the statement made literally the day before by the Ambassador of Ukraine to Serbia Alexander Alexandrovich, the main theses of which I allow myself to quote verbatim:

The disintegration of Russia should become the strategic policy of the international community. Our actions should become offensive and have for the conscious ultimate goal the collapse of the Russian Federation. There comes a time when the last evil empire must fall!

We must clearly understand that they will not agree on anything less ...