16 September 2019
0
The layout of the power unit for a promising Russian nuclear tug is planned to be tested in 2020. According to information published on the public procurement website, Roscosmos made an order to carry out the relevant work of the Forsage Research Institute. The contract was concluded in the amount of 525,6 million rubles. 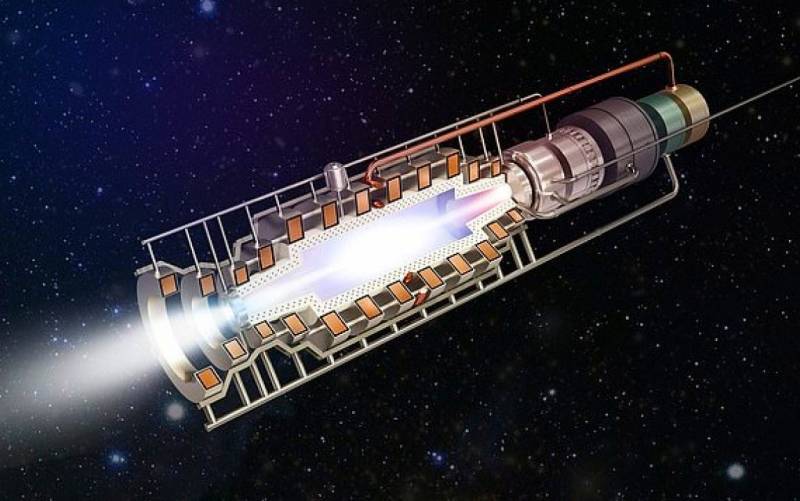 According to the document, the efficiency of the rotary magnetoplasma-dynamic engine layout should be confirmed before March 30, 2020. Additionally, the contractor undertakes to submit proposals regarding the appearance of the electric missile rotor unit as part of the nuclear tugboat power plant.

Recall that the appearance of the future interorbital vehicle, on which the megawatt-class nuclear power unit will be installed, was presented in November 2018. The Russian nuclear tug, according to the developers, will make it possible to solve a wide range of problems, up to the construction of bases on our natural satellite.

Due to the unique design and material of the hull, high-temperature gas-cooled reactor and the ability to use helium-xenon mixture as a coolant, the power plant can operate up to 100 thousand hours. It is worth noting that this time will be enough to reach the edge of the solar system.
Ctrl Enter
Noticed oshЫbku Highlight text and press. Ctrl + Enter
We are
Russia talked about testing a nuclear engine for flying to the moon
Russian nuclear engine will not leave a chance for Ilona Mask
Reporterin Yandex News
Read Reporterin Google News
Ad
We are open to cooperation with authors in the news and analytical departments. A prerequisite is the ability to quickly analyze the text and check the facts, to write concisely and interestingly on political and economic topics. We offer flexible working hours and regular payments. Please send your responses with examples of work to [email protected]
Information
Dear reader, to leave comments on the publication, you must sign in.