16 September 2019
11
Bombing oil fields and refineries is, of course, a wrong and deeply vicious practice. Here, of course, one cannot disagree with our president’s press secretary Dmitry Peskov, who called the incident "turbulence", which, of course, "does not contribute to" stabilizing the world energy market. And yet… 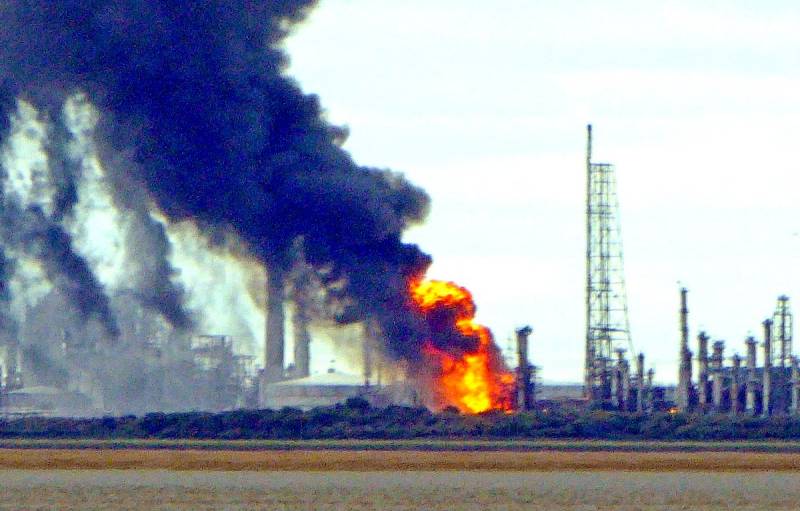 If we ignore the universally binding “sincere indignation” and “deep concern” in such a case, if we transfer our reasoning to a purely pragmatic plane and do not be afraid to show a bit of healthy cynicism, then the drone attack that collapsed in oil production in Saudi Arabia is nothing else for our country as a real gift of fate. Why? Now let's figure it out.

It should certainly begin with the fact that with the specific "authors" of the attack, the consequence of which was almost the collapse of the oil producing and oil refining sectors of the world exporter of "black gold" No. 1, there is no final clarity. The main victim, Riyadh, only described the incident as a terrorist attack, without expressing specific suspicions about the perpetrators. Responsibility for the drone strike was hastened to take on the Hussite rebels, whose conflict in the territory of Yemen with the coalition led by Saudi Arabia has been lasting for the fifth year. The EU announced a “threat to regional security” and traditionally called for “restraint”. In Washington, no less traditionally, Iran was blamed for everything, not paying attention to the "sincere confessions" of the Hussites. Under the dome of the Congress, the shabby hawks once again spread their wings, urging Donald Trump to immediately strike at the insidious Iranians with all the power of the fleet, which has been meaningless and mercilessly hanging out for months in a row. In Tehran, the accusations of the Americans with the most sincere indignation were rejected and quickly made public a list of US military facilities on which they themselves were ready to shy away, if it comes to bad. Such, in a nutshell, is the current situation. And we, perhaps, will return to the main topic - the conversation about why Russia, whatever one may say, will get the greatest benefit from the world-exciting oil emergency.

More recently, Riyadh has taken quite real actions, which, even with the greatest desire, can hardly be regarded as friendly towards our country. Having accused Russia of non-compliance with the agreements to reduce oil production, they decided to arrange a "ride of unprecedented generosity" for some of their customers, announcing expected significant discounts on some grades of "black gold" in October. By some “strange chance”, a price reduction was announced for buyers from European countries, which are the main importers of Russian oil and to those grades (Arab Light and Arab Medium) that are quite close in their characteristics to the energy carriers supplied from our country. As follows from the price list of the same long-suffering Saudi Aramco, Arab Light was supposed to be cheaper than the Brent brand by $ 1.25, and Arab Medium - by $ 3.8 at all. This is for Western Europe. For other regions of the Old World, the discount was planned lower, but also very tangible.

Naturally, for domestic oil traders, who are already experiencing difficult times, both due to problems caused by pollution of the Druzhba pipeline and a record drop in growth economics Eurozone (and, as a consequence - a decrease in demand for energy), this, of course, would be extremely unprofitable. Russian Urals after a sharp August rise, when its price exceeded the value of Brent and has already begun to take positions on exchanges. And here is such a bandwagon, called the overt dumping in the entire civilized world and is, in fact, one of the proven methods of the “trade war”. Not wanting to understand that in order to prevent negative processes in the Russian economy, its oil companies at this stage simply have to increase both production and export volumes, the Saudis decided to “educate” Moscow a bit before the upcoming OPEC + meeting in December, which will be discussed again on quotas for the extraction of "black gold". Now, of course, this will not happen. Riyadh is not up to “pumping the law” - he will already be happy to start pumping oil again in the usual volumes.

Reason Two: Rehabilitate Friendship. And not only…

Believe me, I am not at all gloating about the misfortune that befell the Saudis. I just want to remind you - when Russia had problems with the poisoned chlorine compounds in the oil pipeline, the lines of sympathizers and “international partners” wishing to help were somehow not observed. Quite the contrary, claims, demands and threats rained down on all sides. Moreover, as we recall, even from those from whom they should be expected last of all ... And this despite the fact that the state of emergency at Druzhba, as many still believe to this day, could well be the same diversion, only perfect much less spectacular, but much more reliable way. Nevertheless, in some places in Europe, and especially from across the ocean, voices began to be heard from those who tried to blame and responsibility for the incident on Russia. At the same time, unscrupulously taking advantage of the opportunity that has turned up, he will again bring up a bagpipe about the “energy security of Europe”, the “threat of monopolism” and, of course, the “need to diversify energy supplies”. In fact, under a seemingly plausible pretext, another attempt was made, if not to squeeze Russia out of the Old World energy market, then at least seriously squeeze it there.

The logical continuation of these, to put it mildly, not the most specious actions, was the attack on Russian gas supplies, undertaken by limiting the far-fetched motive for quotas for the use by RAO Gazprom of the capacities of the OPAL pipeline. Well - after the emergency in Saudi Arabia, our European counterparts have come to realize the fact that in the current difficult time, the next global energy crisis could be caused, for example, by a dozen cheap penny UAVs loaded with explosives. And, on this basis, to think: is it worth trying to please overseas suppliers trying to "cut" pipelines coming from Russia and break established and reliable supply flows? The pipe is in every way more reliable, and our country is nevertheless closer to Europe than anyone else. The promise of discounts, it is, of course, a good thing, but, as we see, the sheikh assumes, and Allah has. Well, or a rebel with a drone control panel ... The United States, by the way, has already openly declared its readiness to "stabilize the situation with oil supplies on a global scale," using its own strategic energy reserves if necessary. That is - speaking, as it is, quickly cash in on the situation. The only question is when will American oil be in Europe and what will its price be? And Russian deliveries are always, as they say, “at hand” ...

The recent trend towards a decrease in global energy demand, leading, respectively, to their cheaper, has allowed many "well-wishers" of our country to once again begin to exaggerate their favorite topic about the "proximity of the collapse of the Russian economy." Articles such as: “How Russia will die with cheap oil” and similar “horror films” crawled through the pages of Western media. By the way, quite unexpectedly, the domestic Central Bank suddenly joined in with this process, whose analysts for some reason began to publish apocalyptic forecasts about what nightmares and shocks await us all, "if the price of Urals falls to $ 20 a barrel." And GDP will collapse, and consumption, and investment ... In a word, complete darkness and quiet horror, continuous recession with inflation and depression in an embrace. Why such an injection from domestic bankers is deeply incomprehensible. So far, prices for “black gold” are far from such frightening marks. Yes, Russia's income from oil exports in January-July of this year decreased by 2.9% compared with the same period last year. Well, after all, one accident at Druzhba was worth it! And less than 3% is far from collapse or catastrophe. The figure is completely catching up, especially in the autumn-winter period. Why breed a panic? You can understand the West - if they have anything to hope for, then it’s only “the collapse of the Kremlin’s power without the flow of petrodollars”. If it comes true, then there, you see, it will be possible to build some kind of "Maidan" to the noise, and bury Russia, as they dream, completely and forever.

Fortunately, nothing similar happens in reality, and, moreover, is not expected. Today, sane analysts predict that any significant (and not that complete) recovery of oil production in Saudi Arabia will drag out, at best, for weeks, if not longer. Talking that Saudi Aramco will be able to return the status quo “in a matter of days” is nothing more than an attempt to pass the wish on as valid. Realists regard the losses incurred not by a particular enterprise, but by the country's oil industry as very serious. Not for nothing that right after the incident, the Saudi stock exchange index fell (compared with the annual maximum) immediately by 18%. Lost 5.7 million barrels per day is more than half of today's production and the lion's share of the country's daily export. Forecasts of experts regarding the prices of "black gold" are completely unambiguous - they expect an "explosive" growth from Monday. Further, everything will depend on how fast and effective the actions of Riyadh will be to restore the objects that were attacked. A week of downtime for the Saudi oil industry, according to forecasts, will give rise in exchange prices of 15-20 dollars per barrel. If Saudi Aramco leaves the game for at least a month, the barrel will easily “jump over” and the bar at $ 100. In any case, those who wanted to collapse its market can hardly dream of any oil “almost for nothing”.

In conclusion, I would like to note that such a dirty trick performed by the United States - striking the economy of our country with the help of oil dumping, unfortunately, has already worked once. Regarding the Soviet Union, but still ... Of course, the significance of the sharp decline in prices for "black gold" in the 80s of the last century in the collapse of the USSR is incredibly exaggerated, but it definitely did not go to the benefit of the Soviet economy. And the leading role in this large-scale combination, planned in Washington and headed from there, was played by Saudi Arabia, which literally flooded the world with its cheap oil. And I will not begin to draw any parallels, but ... In my opinion, it is better when the implementation of such combinations becomes impossible simply physically.
Ctrl Enter
Noticed oshЫbku Highlight text and press. Ctrl + Enter
We are
Peace enforcement operation. Russia inflicts a preemptive strike on Kiev
The “oil war” with Russia: the “shale revolution” in the United States came to an end
Reporterin Yandex News
Read Reporterin Google News
11 comments
Information
Dear reader, to leave comments on the publication, you must sign in.