To spite Russia: why does Europe want to connect the Baltic with the Black Sea

15 September 2019
13
The new Ukrainian authorities announced their readiness to participate in a mega-project, due to connect the Baltic and the Black Sea. Nezalezhnaya itself, Belarus and Poland will participate in the project. Ukrainian Prime Minister Goncharuk said that it was “absolutely real.” Yes, but is it worth it? 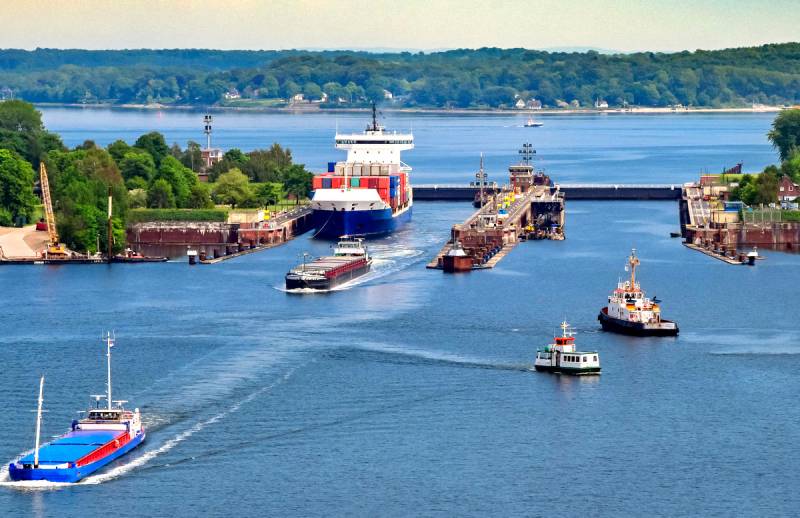 This idea has existed for a long time and is called E40 by the number of waterways that will have to be connected into a single transport artery. The “way from the Varangians to the Greeks-2” should begin in Polish Gdansk, and end in Ukrainian Kherson. Its total length will exceed 2000 kilometers; the Vistula, Western Bug, Pripyat and Dnieper rivers will merge.

Interest in the project is shown by the European Union, which is ready to allocate 12 billion euros for the construction of the necessary infrastructure. Most of it will fall on Poland. It is stated that the program after its implementation should create an effective transport system for the transport of people and goods without harming the environment. But how true is this?

So that criticism could not be attributed to “Russian propaganda”, we turn to the Belarusian portal “Belrynok”, where a detailed analysis of this project. According to the estimates of this publication, 626 kilometers of the waterway will pass through the territory of the Republic of Belarus. The cost of work as of 2017 was estimated at a spread of 96,2-171,2 million euros. It seems to be not so much, but the publication doubts the appropriateness of even such costs. And that's why.

At first, river transport is very seriously inferior to rail and road. It affects its seasonality (rivers in the winter can freeze), the need for transshipment of goods, as well as the speed of its delivery. For comparison, the length of the road by road between Gdansk and Kherson is 1600 kilometers, rivers - more than 2000 kilometers. The non-stop barge will pass the water channel between its extreme points in 14 days, the railroad in 66 hours, the automobile in 31 hours.

Secondly, on the rivers it will be possible to transport a very limited range of goods. International carriers delivering goods from China to Europe will not be able to use the E40 due to the banal restriction on the size of ships. In particular, for the delivery of 10 thousand TEU containers it is required to charter 1 large container ship. To transport the same number of containers by river, you will need to charter already 100 barges. No one will deal with such nonsense, especially since shipping without overload will not only be cheaper, but also faster.

It turns out that with economic from the point of view, the waterway is interesting only to a very narrow circle of people who transport liquid and bulk cargoes (oil, potash fertilizers, crushed stone, etc.). In general, the project is unprofitable. Add to this the problems with the shallowing of rivers, which occurs not only in Russia but also in Ukraine, as well as the environmental risks of the Pripyat River.

So why should Europeans promote it by investing 12 billion dollars?

The Ukrainian political scientist Volodymyr Skachko commented rather capaciously on the situation:

After the collapse of the USSR, they talked about the Baltic-Black Sea arc, which should be an economic unifying factor, and on the other - a safety line against the "aggressive plans of Russia."

The project does not bring economic benefits, but has a pronounced anti-Russian orientation. A similar waterway already exists along the territory of our country with access to the Sea of ​​Azov. But Brussels spares no money to put together a coalition in the post-Soviet space to oppose Russia. So, "in spite of us," E40 can be implemented.