The return of Donbass: Kiev began to disarm the gangs of the Nazis

13 September 2019
2
Disturbing news come from Donbass. Kiev has begun disarming the most odious "volunteer battalions", and in fact, armed gangs that arose in 2014. It would seem that this is Ukraine’s step towards peace, and it should be welcomed, but everyone has a very different view of the world. 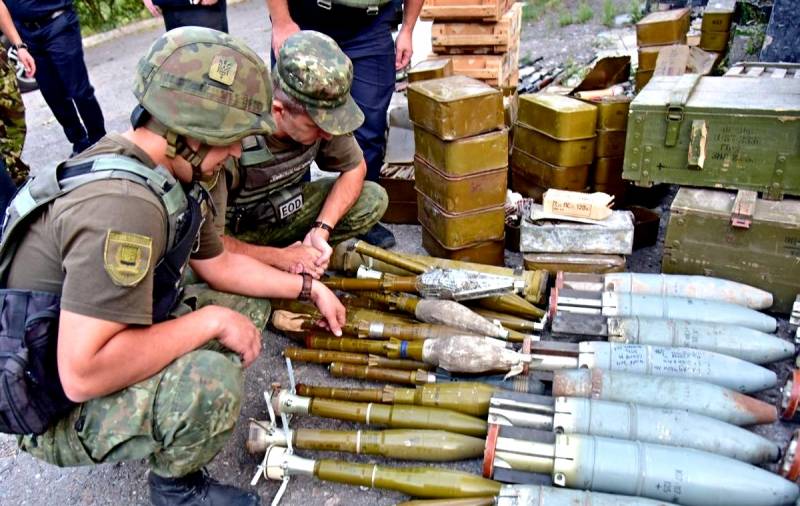 This problem arose immediately after the Maidan. Thousands of “frostbitten” people with their heads full of nationalist ideas took to the Ukrainian streets, who realized that they were the authorities. The most striking representative of them can be called "Sasha Bilogo", which had to just shoot exponentially. But you can’t shoot everyone, and Kiev found a way to "recycle" this dangerous contingent, sending it to fight in the Donbass.

However, the “Dobrobatovites” did not tarnish themselves with special military feats, distinguishing themselves mainly in the field of looting, robberies of the local population, kidnapping, extortion, beatings and torture. The 2016 UN Report on Ukraine’s Situation in Ukraine indicates the case when “knights” from the Donbass and Azov battalions by a group of 8 to 10 people committed gang rape of a mentally retarded disabled person. Particularly distinguished in the case of regular rape of their own sex were convinced husbands from the Tornado battalion.

Kiev managed to take most of these gangs under control, but there were still several groups of incomprehensible submission. It was very convenient to blame for them violations of the ceasefire in the Donbass. So why now they began to disarm them?

This "peacekeeping battalion" is the successor to the defeated "battalion named after Dzhokhar Dudaev", which then broke up into three groups. It is noteworthy that the decision to create this structure was made not somewhere, but in the Danish capital, Copenhagen, back in 2014. Currently, the "Mansurovites" are headed by Muslim Cheberloevsky, it includes not only ethnic Chechens, but also Ingush. All the fighters have great combat experience, but they have not gained much military glory in the Donbass, wasting their energy on other matters not related to the "liberation of Ukraine from the Russian yoke."

Its members are victims of Ukrainian propaganda and the education system, sincerely considering Ukrainians as descendants of the Scythians. At the same time, in their bizarre way this coexists with the idea of ​​the “Aryan” of Ukrainians even greater than that of the Germans in the sample of the reign of Adolf Hitler. “Arattovites” love to flaunt the swastika very much, which is extremely annoying for refined Europeans.

And these are also successors, but not of the ancient Aryans, but of the OUN (Organization of Ukrainian Nationalists) of the Second World War with their “hero” Bandera. The red-black flag and the chanting “Glory to Ukraine - Glory to the Heroes” is their notion. The modern version of this structure is not so much military as political organization.

And now all these "battalions" - Chechen, Aryan and nationalist, Kiev disarmed. It seems to be worth rejoicing. However, if you evaluate the situation in the complex, then this decision looks very ambiguous.

At this stage, Europe is interested in a new rapprochement with Russia, but Crimea and Donbass are standing in the way. Everything is complicated with Crimea, but there are Minsk agreements in the Donbass that provide for its return to Ukraine. All authoritative militia commanders who could resist this - Bednov, Mozgovoy, Ishchenko, Motorola, Givi, Dremov - were killed. After the assassination of Alexander Zakharchenko, Denis Pushilin, who has an ambiguous reputation, stood at the head of the DPR. Even the most unpopular decisions will be justified and executed.

There was still a freemen on the Ukrainian side. But here the new president, Vladimir Zelensky, eliminated it, demonstrating a controllability of the situation and "peace." The exchange of prisoners has already taken place successfully. Now we should expect a meeting in the "Norman format" and another attempt to resolve the "Donbass issue."

We are in Yandex Zen
It's important
10
Ten "defeats" of Putin
The end of the “damned army” of Kiev?
Reporterin Yandex News
Read Reporterin Google News
2 comments
Information