Riot ripens in the US: Americans lose defeat in trade war with China

13 September 2019
3
Mutual reverence made by Beijing and Washington, while for a moment distracting from the mutual economic "pecking", should by no means mislead us. There can be no question of any cessation of the trade "war" tormenting the whole world between the two superpowers. Well, China canceled some duties ... Well, Donald Trump has postponed the introduction of new restrictive tariffs "already" for two weeks. 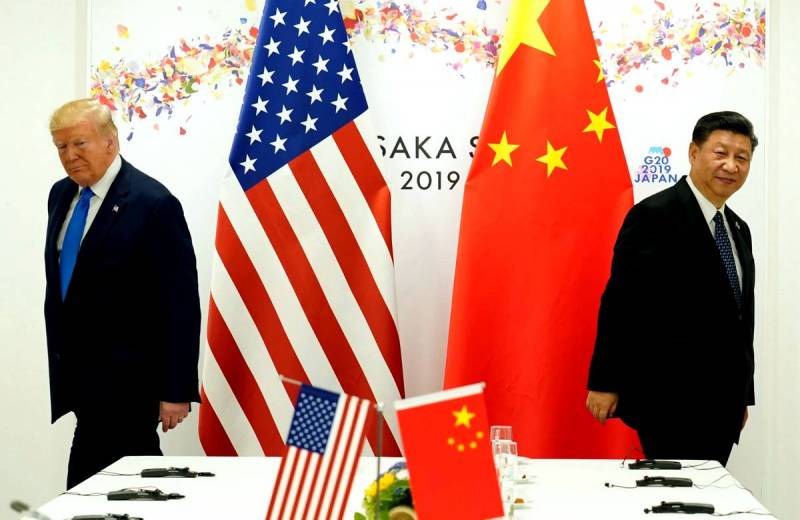 This does not change the overall picture - the essence of the conflict between the United States and the Celestial Empire lies completely outside the realm of economics, and the main stumbling block in relations between states is not at all a trade imbalance, about which there is only talk to the public. Most likely, the confrontation will continue until one of the parties faces the impossibility of continuing it. But just what kind of side will it be?

Then we began to consider wounds ...

It would be fundamentally wrong to say that the Chinese economy does not feel the consequences of the “sanctioned competition” imposed on it by the United States. Feels, and how! The evidence that China’s GDP growth in the second quarter of this year amounted to only 6.2%, showing the worst figures for almost the last three decades, has long become, so to speak, a common place in all conversations on this topic. And yet ... The unbridled optimism of Donald Trump, with might and main sprinkling tweets about the fact that the Celestial Empire is “ready to make a deal on the most favorable conditions for the US”, as well as his claim that “China is doing very badly” and “The duties hit him very hard, but they didn’t hit us at all,” they are, excuse me, a bit of a fun alternative to a gifted person at a funeral. No, the US Treasury Secretary, Stephen Mnuchin, also gives out television interviews in which he swears that "the president can enter into a trade deal with Beijing at any time and does not do this, seeking better conditions for American workers." It sounds inspiring, but on the other hand, what else can he say? The minister is a bonded person, even in the USA. His job is this: telling citizens that everything will be fine.

In fact, everything is known, as usual, in comparison. If we talk about trade between the two countries, it “collapsed” by almost 14% compared to the same period last year. But the main thing here is in the details. The same imbalance, which Trump decided to overcome, in fact, started the whole fuss, remains at the level of more than 195 billion dollars. Guess whose benefit. The data that, with a decrease in Chinese exports to the United States by less than 9%, US imports to the Celestial Empire decreased by more than 25% will probably help you in this. And who are the fools? We can talk about the multi-billion dollar economic losses of the United States from the trade “war” unleashed by them, but much more eloquent are the data released by analysts of the American bank JP Morgan. According to their estimates, the 10% duties imposed by Trump on September 1 on Chinese goods worth $ 300 billion will cost every American family an extra thousand dollars a year. And if tariffs rise to the promised 25%, then this amount risks becoming almost a thousand and a half. It would seem - is this really so much, by the standards of the USA? It seems to be uncritical, however, according to JP Morgan experts, these excess costs will exactly “devour” the increase in welfare that ordinary Americans received thanks to the 2017 tax reform.

Ruined life for everyone

With all this, it is not possible for the White House to somehow compensate for the tangible blow to the pocket that hundreds of millions of citizens (and potential voters!) Will receive. These are not the farmers whom the US authorities are forced to “feed” with very tangible subsidies. However, with farmers everything is far from rosy - it is not for nothing that Trump himself almost first of all demands from Beijing “to make large purchases of US agricultural products”, putting this issue at the forefront in the negotiations that are still unsuccessful. It is understandable - the crowds of “rednecks” with forked arms moving towards Washington are not smiling at all for the president. And besides, everything seems to be going. Not so long ago, the American research group AMA Network Open released truly frightening data - it turns out that the suicide rate among male farmers aged 45-54 over the past three years has increased by 41%, and this process is accelerating. The study does not say anything about the relationship of such a sharp increase in suicide among US rural residents with the hardships they experience because of the trade “war” with China, however, it is hardly possible to speak of a simple coincidence.

Literally everyone suffers from Trump's mess. The rich, as they say, also cry ... We are talking about the largest American corporations, forced to urgently "evacuate" from the Middle Kingdom because of the frantic duties on goods manufactured there. The process is in full swing - according to a survey conducted by the American Chamber of Commerce in Shanghai (AmCham Shanghai), more than a quarter of respondents said they would transfer funds previously intended for investing in businesses located in China to other regions of the world. This process is especially noticeable in areas of high of technologies, software and hardware, as well as in the service sector. At the same time, the White House’s naive expectations that US companies will “return home” with their production facilities are not justified in the least. So far, Vietnam is the main “beneficiary” of the ongoing shift in business flows, where many investors are rushing. Horseradish, as they say, radish is not sweeter. He, too, will have to declare a trade "war" ?! The scale of this problem for American big business is by no means comic - such giants as Boeing, Caterpillar, Nike, Walt Disney, Starbucks were under serious blow. The same Apple receives in Celestial Empire 20% of revenue, and for Tesla its market is second after its native, American.

It is not surprising that in such circumstances, the ongoing discord between the countries through the efforts of the president, to put it mildly, does not cause approval from the vast majority of those whom he directly concerns. The same chapter of the above-mentioned American Chamber of Commerce in Shanghai, Ker Gibbs, is very categorical in his statements on this subject. He bluntly states that "the Chinese market is too big and too important" for the United States to afford to give it up.

We are not in that position!
- Gibbs exclaims pathetically.

Moreover, among American businessmen, a real "rebellion" is slowly brewing. Trump’s “instructions” to immediately leave their companies from China cause a hollow murmur: “Who is he to tell us!”, Which is increasingly threatening to result in open disobedience. It is quite natural - after all, even a study conducted by the US Federal Reserve System yielded extremely disappointing results: by the beginning of next year, the conflict between the US and China could cost the entire world economy a loss of about $ 850 billion. The specialists of this organization modestly kept silent about what proportion of this figure would be specific to the USA, however, they came to the conclusion that the world trading system had not known such a level of uncertainty since the 70s of the last century. The United States, as usual, not only themselves seek the abyss, but also persistently drag the whole world there.

It is very characteristic that the only, perhaps, who ardently and unequivocally supported Donald Trump’s attempts to harder “communist China” more painfully, turned out to be the notorious George Soros, whose infamous Open Society foundation did not want to see in an ever increasing number of different countries. Caused by the current president of the Sino-American disgrace, this vicious old man proclaimed no less than “the most significant achievement” in his external policy. Well, who’s talking about something, and Soros is talking about the “Chinese threat” ... It should be noted that American experts, who clearly retained much more common sense than this famous creator of the “color revolutions,” assess the situation in a completely different way. Thus, Scott Kennedy, an expert at the Center for Strategic and International Studies in Washington, is convinced that, despite Washington’s efforts, “China’s economy is still stable.” The presence of internal incentives for its development and reliable trading partners around the world, in his opinion, "allow Beijing not to make monstrous compromises with the United States." David Rocher, founder of Independent Strategy, an investment research firm, is even more categorical in his assessments.

China will inevitably win the trade war!
- he is sure.

According to the analyst, the only really weak point in the conflict for the Celestial Empire is the dependence of its industry on certain American components today - today only 16% of the semiconductor chips used in Chinese electronics are manufactured in the country. However, thanks to the already launched state program “Made in China”, by next year this number will increase to 40%, and by 2025 to 70%. And then in Beijing they will finally say: “Good buy, America!”

Rocher quite rightly asserts that the conflict goes far beyond purely commercial relations, being a confrontation not even so much in the field of technology, but as an expression of the ideological incompatibility of the Middle Kingdom and the United States. He calls what is happening "a conflict between a world power that is on the rise and a dying world power." I don’t need to explain who is in this formula. Well, if in the United States itself more and more analysts and experts predict victory for China, then the outcome here, I think, is clear. With such a mood, wars do not win - even if they are trading ones. And it would be better for Donald Trump not to try to portray a good face in a bad game, ranting about the “gifts” he makes to Beijing on the 70th anniversary of the PRC, postponing another blow in this confrontation, and try to complete it before the meaningless conflict buried not only him ambitions “to make America great again”, as well as any prospects for the USA in general.
Ctrl Enter
Noticed oshЫbku Highlight text and press. Ctrl + Enter
We are
Peace enforcement operation. Russia inflicts a preemptive strike on Kiev
Three years left: Ukraine will be sold in parts
Reporterin Yandex News
Read Reporterin Google News
3 comments
Information
Dear reader, to leave comments on the publication, you must sign in.