12 September 2019
7
The split between a united Europe and the "Anglo-Saxon world" became so obvious that it was already officially fixed by the German Chancellor, Angela Merkel. Speaking in the Bundestag, the head of Germany said that the United States is no longer the “automatic defender” of the EU, and Europe itself will have to make a “big contribution” to its future. Otherwise, as a program, such a statement can not be called. Where will the Old World lead it, and are there any hopes for a rapprochement between the EU and Russia? 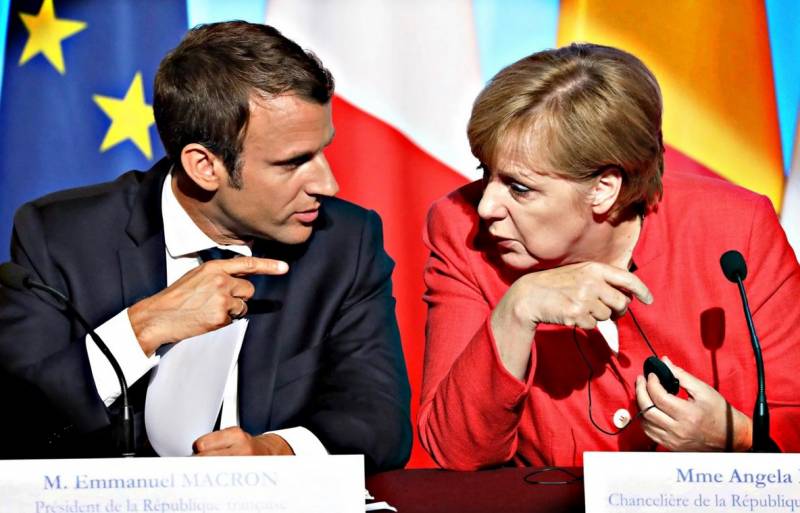 Here is what Angela Merkel specifically said during the debate about EU relations with the United States:

Europe is bound by values ​​with this superpower, despite all the differences of opinion. There is much in common, but there is no longer automatism in the fact that they, as during the Cold War, will play the role of defender of Europe.

The statement is somewhat crafty, since no one is going to attack Europe, and it itself does not need military protection, for example, from the Russian Federation. In this way, the German Chancellor simply fixes that yesterday’s allies disagreed on fundamental issues, and now everyone is for himself. As the saying goes, thanks to Donald Trump with his slogan "America First."

But what's next? Where and with whom will Europe go? We can form a few points from Merkel’s speech and the rest between the lines.

At first, the Chancellor’s speech can be considered a response to the extraordinary activation of Emmanuel Macron recently. The French president is clearly trying to pull the blanket of a pan-European leader to the side of Paris. And then Berlin made it clear that it was keeping abreast, and it certainly would not remain aloof from the political process.

Secondly, the inhabitants of the Old World are already openly starting to look at the Americans and the British with their Brexit, as at direct rivals. Two axes are already clearly visible: Washington - London and Berlin - Paris. In conditions of a large redistribution for markets and spheres of influence, their collision, in principle, is inevitable.

ThirdlyIt is on the basis of the above that the German Chancellor speaks of the need for a greater contribution of Europe itself to its own security and the acceleration of technological development. In practice, this may mean moving towards the creation of a single European army as opposed to NATO, where the United States dominates. Berlin and Paris will need their own armed forces and navy to defend their interests against the Anglo-Saxons. In addition, Merkel’s words about the outlined technological lag. Oddly enough, the market capitalization of leading European technology companies is an order of magnitude inferior to American and Chinese competitors.

And finally, the most basic conclusion concerning just China and the Russian Federation. The Chancellor noted the global importance of the trade war between China and the United States, as well as the "geostrategic strengthening of Russia." If you look objectively, it’s in the interests of Europe to prevent the Russian-Chinese alliance from forming, as President Macron honestly said earlier. In turn, the Europeans will seek to maintain the raw materials status of Russia, to slow down economic development and keep it in its sphere of influence. Warming relations may occur after the surrender of Donbass to Ukraine under the Minsk agreements.

From China, Berlin and Paris will try to get investments to replace the abandoned American technologies, as well as access to the Chinese market. At the same time, Germany and France will try not to “lie down” under Beijing, which is actively expanding its expansion into Europe, seeing in it a replacement for the American market.

Here is such a difficult alignment. For Russia, it would be most reasonable to spend oil excess profits on their own economic development and rearmament.

We are in Yandex Zen
It's important
7
Ukraine from the inside: traitors, curators and those who watch from the Kremlin
Ten "defeats" of Putin
Reporterin Yandex News
Read Reporterin Google News
7 comments
Information