10 September 2019
6
France was the first of the great European powers to take a step towards Russia. For the first time in five years after the Crimean events, a meeting was held in Moscow in the “2 + 2” format, when the ministers of foreign affairs and defense of our countries could communicate directly. The head of Russian diplomacy, Sergey Lavrov, called this conversation a good opportunity to discuss the key problems of our time and find joint steps to solve them. What is behind the unexpected friendliness of Emmanuel Macron, and is the Kremlin worth grabbing at the hand extended by Paris? 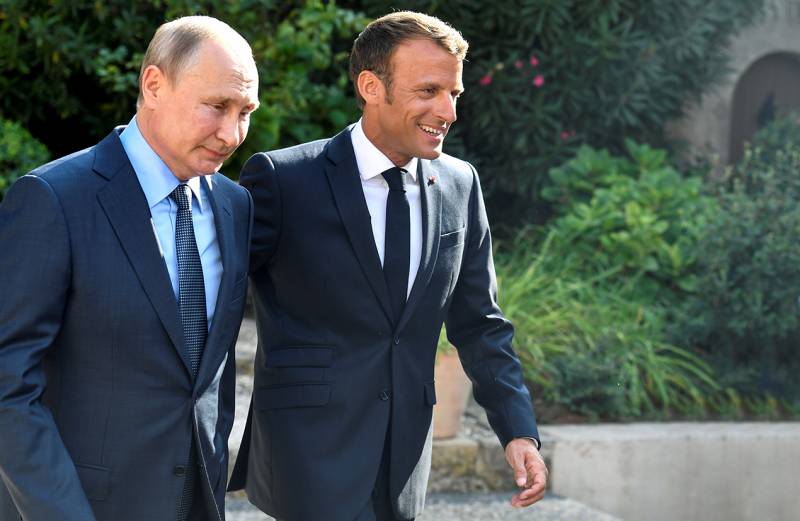 Domestic experts are inclined to consider France’s move towards Moscow anti-American. There is probably a certain truth to this.

At firstdue to very aggressive policy Trump under the slogan "America First", the former globalist system of world order is rapidly disintegrating. Yesterday's European allies became direct competitors for the United States. Great Britain sailed from the EU, clearly betting on Washington. Within the European Union itself, Germany and France are pushing their elbows hard for leadership, and modern Russia openly “lies” under China with its expansionist economic politics.

The traditional dominance of the West becomes a big question against the backdrop of the tremendous successes of the PRC and Russia that joined it, so Emmanuel Macron honestly stated:

If we let everyone go in the same direction, we will push such a great power as Russia to either isolation, or a privileged dialogue with China, or a new geopolitics that will not be in our interests.

In this situation, the head of the Fifth Republic rushed to save the "Western world", trying to keep Moscow in its sphere of influence. But, frankly, not to allow the Russian-Chinese alliance led by Beijing is in the interests of not only Europe, but, above all, the United States itself.

Secondly, you can not ignore the personality factor. Any self-respecting Frenchman clearly blushed, watching Donald Trump publicly chase, "like a kid," their president. The last straw for Emmanuel Macron could be Trump's extremely rude tweet regarding the possibility of taxing French wine - the national pride of the Fifth Republic:

In the near future we will announce significant actions in response to the stupidity of Macron. I have always said that American wine is better than French.

So, what can Paris and Moscow try to agree on, other than trying to "drag" Russia from China, and how much will it benefit our country?

The end of the INF Treaty

The withdrawal of the United States and Russia from this international security treaty once again turns Europe into a field of potential battle between the nuclear powers. Neither Berlin nor Paris smiles at becoming targets for Russian ballistic missiles, so French diplomats made Sergey Lavrov promise not to deploy nuclear weapons in regions where there would be no similar American systems.

Europe didn’t really like Washington’s unilateral exit from the JCPOA, since sanctions and a ban on the purchase of Iranian oil followed. European big business was rapidly starting to leave Iran for fear of falling under secondary American sanctions. President Macron said:

Iran must remain in agreement, and we must do everything to remain in it.

For his part, the head of the Fifth Republic asked the United States for permission to buy Iranian oil. As an alternative, he proposed a $ 15 billion loan to Tehran, which would help Iran affected by the sanctions improve its economic situation in exchange for maintaining the deal. Moscow’s help and mediation in the negotiation process would clearly not be out of place.

Crimea and Donbass stood in the way of Russian-French friendship. If the position of the Kremlin in Crimea is known, then in the Donbass, domestic diplomacy continues to adhere to the position of its “Ukrainian character”. Recall that under the Minsk agreements, the DPR and LPR must return to Ukraine in “special status”, and the state border is transferred under the control of the Armed Forces of Ukraine. After the change of President Nezalezhnaya from Poroshenko to Zelensky, progress in the implementation of Minsk was clearly outlined. The other day there was an exchange of prisoners of war, which was preceded by communication between Putin and Macron. The dynamics are declared so positive that in the coming weeks a “Norman format” can be convened again.

The final resolution of the “Donbass issue” with the assistance of Paris will dramatically increase the authority of President Macron. But it is not a fact that this will greatly please the inhabitants of the DPR and LPR.

We are in Yandex Zen
It's important
2
Putin and Lavrov have done their job. General Shoigu, your way out!
Ten "defeats" of Putin
Reporterin Yandex News
Read Reporterin Google News
6 comments
Information