"The United States begins to be rude": the worst between Moscow and Washington is yet to come

10 September 2019
53
The very specific and clear answer given by the heads of the Russian defense and diplomatic departments - Sergei Shoigu and Sergey Lavrov to the public boorish demarche of the Pentagon’s head Mike Esper, is, in fact, not just another proof that these high-ranking Russian policy do not climb. In fact, this is a completely unambiguously expressed position of our state, which determines the vector of further development of relations between Moscow and Washington. If you want - expressed in an extremely harsh form, the refusal to surrender. 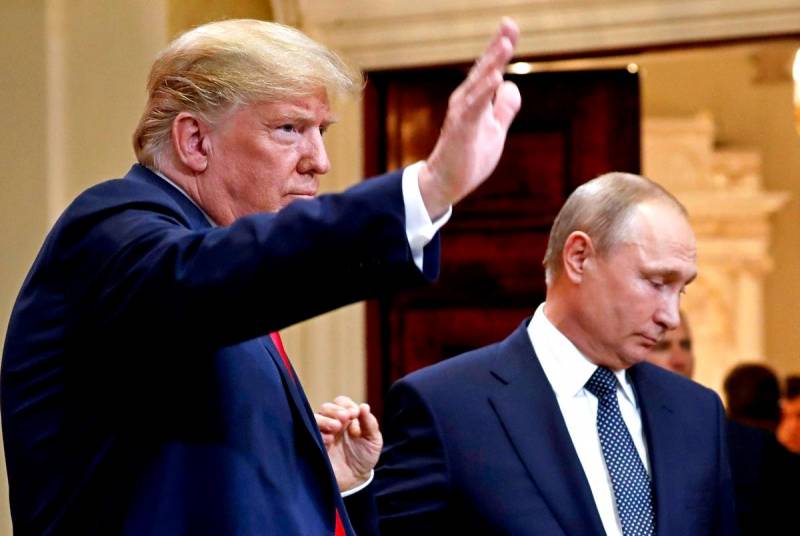 But maybe it wasn’t worth chopping off just like that? Perhaps it was necessary to try to find compromises, to try to "normalize" something there again, or even to "reboot"? Well, no ... All recent events convincingly prove that there are simply no other options for "communication" with the United States acceptable to Russia.

And hand over the weapon ...

In the talk about the “abnormality” of the behavior of our country, the head of the United States Department of Defense, vigorously wandering around Europe with the aim of putting together either an anti-Iranian coalition, or an anti-Russian (and, most likely, both), noted in Paris. His speech at the Royal Institute for Defense Research, held in the capital of Misty Albion, is no less revealing. In his London speech, Mr. Esper said that his country was ready to make even more efforts to “contain the aggression of Russia”, which, in his opinion, manifests itself “not only in Eastern Europe”, but almost “in all regions of the world ". You see, he dreamed of "authoritarian regimes that redraw the global security system in their favor at the expense of other states." As the “most authoritarian,” the head of the Pentagon openly named our country. That is, on the one hand, he urges us to “accept Western values, change behavior” and “move forward,” and on the other, without even waiting for an answer to this message, he declares an implacable struggle against Russia! Lovely ...

However, what exactly means a “change of behavior” to “normal” in the understanding of this high-flying Washington official, it became clear even before his appointment to a senior position in the US Armed Forces. Speaking at the relevant Senate hearings on the consideration by American lawmakers of a candidate for the most important military post, Esper made more than an eloquent statement. In his opinion, the START-3 treaty can be renegotiated between Moscow and Washington only if it includes an item on full control of all Russian nuclear weapons, up to tactical charges! How do you like the scope? "Wishlist" of this scale, in fact, make you think about the normality of Esper himself. And at the same time, they give an excellent idea of ​​what kind of behavior of Russia he sees as acceptable. Essentially, they do not even demand from us complete and unconditional surrender, but voluntary suicide. What will happen to Russia, give it the keys to its own nuclear arsenals in the "good" American hands, you do not even have to specify. Especially, in light of the fact that, even without the slightest hope of receiving them, Washington, nevertheless, is stubbornly trying to behave with our country as if it were its own colony.

"The people of Russia are tired!"

It was this statement that was published publicly and in print, using The Washington Times as a mouthpiece, recently by two members of the US Senate Foreign Relations Committee, Michael McCall and Eliot Engel. In their opinion, our fellow citizens, exhausted to the limit, whose troubles and hardships they take so close to heart, from the unbearable "tyranny of Putin", which "does not stop at anything to brutally suppress any political protest." They, you know, from Washington know better ... And if so, then the “shining light of world democracy” in the person of the United States is simply obliged, without stopping for a second, to fall down with all its might on the enemies that have settled in the Kremlin and not just “support the Russian people in their struggle for freedom ”, but also“ bring those responsible for violating human rights to severe responsibility ”. If you think that these are exceptionally loud words, then in vain. Just last week, these two clowns seriously began to demand that Donald Trump impose new sanctions against our country! According to their senatorial understanding, a new portion of some particularly severe restrictions, to its people "tormented by tyranny", will definitely benefit.

And even tried to bring the legal base under this case, damned! Like, “beaten up, arrested, imprisoned”, and, most importantly, “intimidated to the utmost by the authorities”, the participants in “thousands of peaceful demonstrations and rallies” frankly scream revenge. This is a direct violation by Moscow of its "obligations under the Organization for Security and Cooperation in Europe"! (And what is your American relationship before that, even if it were so ?!) And, therefore, the State Department and the White House should immediately apply sanctions against Russia in accordance with the Magnitsky Act, so that it doesn’t seem a little! Alas, all these ugly antics, which are nothing more than a standard of interference in the purely internal affairs of a sovereign power, do not at all boil down to amusements of senatorial idiots and cheap political PR. The United Nations joined the company almost immediately, which has long turned into an obedient puppet of Washington. As soon as the team heard the voice: “Voice!”, And now Michelle Bachelet, the whole UN High Commissioner for Human Rights, sharply worried about the fate of the Moscow “opposition” party, “throws the masses” a call “to investigate the events of protests” in our capital. For example, to "figure out" whether the police really used violence. And also in how justifiably the police themselves acted ... Well, well, dear, you weren’t so excited when the "yellow vests" swept in Paris? And to this day, lupus, by the way. Maybe you’ll investigate from there and start?

However, restoring order in Moscow, which led to the failure of yet another attempt to organize a Maidan there, worries Washington not so much as the problems that may arise when the next one is arranged. And the fact that actions aimed precisely at this is being undertaken and will be undertaken by representatives of the United States in the future does not even try to hide it! On the contrary, Washington experts today are discussing with might and main the extremely burning issue regarding section 1075 of the law on budgetary appropriations for next year. This paragraph of a very voluminous document states that in 2020, the US Secretary of State will be obliged to demand detailed information from Moscow about all, without exception, the movements of her diplomats on American territory. And immediately transmit the data to the FBI and National Intelligence. For some in Washington's highest echelons of power, this idea was extremely unpleasant and caused a flurry of criticism. Do you think that this is precisely a violation of the very “rights and freedoms” for which the United States is ready to tear the throats of everyone and everyone? Due to the fact that such demands look like the most natural rudeness and the manifestation of utter distrust and disrespect for Russia? Do you really think so? I can only envy your naivety.

Washington seriously (and, it must be said, not without good reason) fears that the “Russian barbarians” will immediately give a mirror answer to this demarche. Well, just like during the “diplomatic war” that erupted between the countries over the “Skripals case”. Do you expel six dozen of our representatives? Well, and we will give exactly the same number of yours under the knee ... Do you close the Consulate in Seattle? Well, that’s not how yours can be in St. Petersburg! An official letter of protest in this regard to the Senate Committee on the Armed Forces was sent signed by the acting director of the administrative and budgetary administration of the White House, Russell Vouta. However, there is no doubt that the text of this masterpiece of the epistolary genre was dictated to him from the Pentagon and the CIA. Why? And you will appreciate only one quote:

... The possible restriction of Russian travel by our diplomats will undermine their ability to work relatively freely in Russia to advance US interests!

Believe me, I did not exaggerate and did not overestimate anything - that’s exactly how it is written. Truly American simplicity, which, as the Russian barbarians say, is clearly worse than theft.

After that, the newspaper sensation now inflated in the USA about the alleged “evacuation from Moscow of the CIA’s most important agent working in the highest echelons of the Kremlin’s power” conducted in 2017 no longer seems delusional, much less ridiculous b were not denied her in Langley and the White House. Spies, bastards, and then they are going to spy! They did subversive work and will lead! But along the way - demanding from us to “change behavior” and “become normal” ... Yes, by the way, about normality. Here the other day, one of the US presidential candidates, Bernie Sanders (he seems to be running for Democrats), speaking to the voters, voiced a simply wonderful proposal: to limit the birth rate in poor countries by “making it easier for women to have access to abortion”! You know, I deeply spit, does Mr. Sanders know that this thesis fully repeats the proposals for "inferior peoples" expressed in the SS developed and delighted his boss Heinrich Himmler with the "General Plan Ost". It is enough for me that ideas coincide one to one. If it is precisely these “democratic values” that we are offered to accept for “moving forward”, then I completely agree with Shoigu and Lavrov - let’s better “we will be abnormal”. And the longer the better.

We are in Yandex Zen
It's important
51
Putin and Lavrov have done their job. General Shoigu, your way out!
Ten "defeats" of Putin
Reporterin Yandex News
Read Reporterin Google News
53 comments
Information