Money down the drain: Does Russia need its own nuclear aircraft carriers?

7 September 2019
6
Do modern Russian Federation need their own aircraft carriers? Thousands of copies are broken around this question in verbal battles, but there is still no definite answer. Should our country continue to remain only a land power, or is it time for us to become a great ocean? 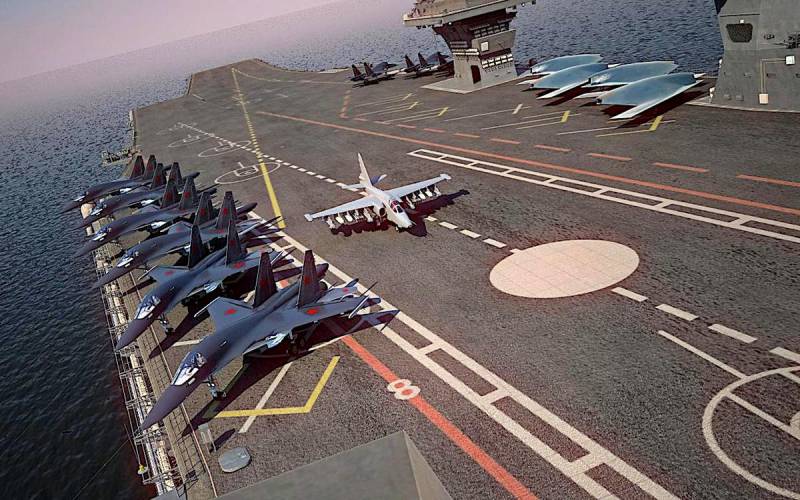 The experiments with the transformation of ships into sea airfields began at the beginning of the last century. In World War II, the United States, Japan and the United Kingdom owned aircraft carriers in the Navy. The fact that this is a formidable weapon, Tokyo convincingly proved, at once drowning almost the entire American fleet in Pearl Harbor. During the war, the United States built 28 heavy aircraft carriers and over a hundred light aircraft, becoming, in fact, the new masters of the seas. The real breakthrough was the appearance in the US Navy of atomic aircraft carriers, which allowed Washington to project its military power in almost any corner of the globe.

In the USSR, they closely followed the successes of their main ideological and potential military adversary. Worked out in the late fifties, the project of its own strike aircraft carrier, but he remained on paper. The country's leadership has relied on missiles and nuclear submarines, considering them the most effective means of counteraction. In the sixties, the project 1143 “anti-submarine cruiser with aircraft armaments” was created, on which aircraft with vertical take-off and landing, and helicopters were based.

In total, four such “as if aircraft carriers” were built - “Kiev”, “Minsk”, “Baku” and “Novorossiysk”. The further development of this project is our only "light aircraft carrier", it is the Admiral Kuznetsov Tavkr, originally called "Riga". Another Soviet ship of the same series - “Varyag”, now serves in the Navy of the PRC under the name “Liaoning”. Our last hope - the nuclear carrier “Ulyanovsk”, was not completed due to the collapse of the Soviet Union and the cessation of financing, and promptly, in 1992, was put into scrap by the “reformers”.

What do we have for the soul now?

At the Ninth International Naval Salon, visitors were introduced to two projects of Russian nuclear-powered aircraft carriers - Storm and Manatee. "Manatee", capable of carrying up to 60 aircraft, as well as drones and helicopters, seems to be a fairly successful development. “Storm” is even better: its air group will be able to count from 70 to 90 aircraft. But whether we have our own full-fledged AUG or not, is decided in high offices. What are the doubts?

Opponents of the construction of domestic nuclear aircraft carriers give the following arguments:

Russia is a great land power, for its protection it is enough to have a strong army, but not an expensive fleet.

Russia is a peaceful country, its military doctrine is purely defensive, and aircraft carriers are the "weapons of the aggressor."

Carriers and escort groups for them are long and expensive to build.

An aircraft carrier is a very good target, so it’s easy to drown them. Carriers are not needed, because, in case of war, nuclear missiles will solve everything.

Without claiming to be the ultimate truth, I would still like to object:

At first, the modern Russian Federation is ideologically not the heir to the USSR. Today we have capitalism, and within its framework, the government pursues a rather active expansionist policies. Today, Russian soldiers and military experts are present in Syria, and in Africa, and in Latin America, where big business has its own interests. If we had the opportunity to send a couple of full-fledged AUGs to the shores of the SAR or Venezuela, and the conversation with the Americans would be completely different.

In fact, we are the same “shark of capitalism” as yesterday’s ideological opponent in the person of the United States, only a smaller caliber. Our doctrine is defensive, but capitalism is aggressive and requires continuous expansion, in essence. This means that we must comply, pumping up and military muscles, having the opportunity to project power far abroad.

Secondly, the argument that the aircraft carrier is such a large and convenient target, rather controversial. The fact is that they themselves do not swim, they are accompanied by a whole AUG for protection. As for the uselessness of aircraft carriers in the confrontation with the United States, then everything is not entirely clear. Of course, in the case of the "last war", the US and I will exchange nuclear missile attacks, and the aircraft carrier here will be unprincipled.

But who said that such an exchange of ICBM strikes will happen at all? With the same Americans, we are conducting an indirect struggle on foreign territory: Ukraine, Syria, Venezuela ... To participate in such regional conflicts far beyond the sea, a couple of aircraft carrier strike groups would be very useful.

ThirdlyIt’s rather strange to hear the argument about the excessive cost of building a fleet. There is money in the country, although they advise us to hold on, the only question is how and what they are spent on. The World Cup cost a budget of 13,2 billion dollars. It's a good thing, they looked, they were glad for a few weeks, but everything quickly ended. The Sochi Olympics cost the country $ 51 billion at all.

Sorry, but this is not the cost of one full AUG. The construction of the navy is not just muscle building, it is, first of all, the development of its own high-tech industry. This is the creation of large shipyards for aircraft carriers, the purchase of modern equipment, loading orders of thousands of related enterprises. All this leads to the creation of new jobs, there is a demand for training in technical specialties.

Money down the drain is about entertainment, billions on the navy are investments in one’s own the economy and national security, increasing the country's credibility in the international arena.