6 September 2019
0
On September 5, 2019, at about 16:00 Moscow time, in the Saratov region, near the village of Sokolovy, the Mi-8 helicopter of the Russian Ministry of Defense made a hard landing. As a result of touching the ground, the helicopter caught fire and burned out in a short time. A crew of three managed to leave the burning helicopter in time and escape (escaped with abrasions and bruises). 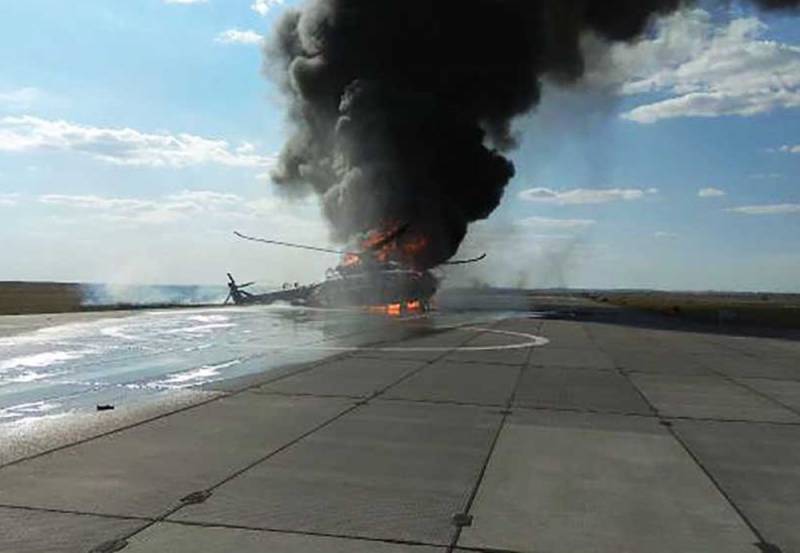 The military department considers the destruction of one of the landing gear racks to be the probable cause, because a military helicopter capsized and caught fire when taking off on the runway of the Sokol airfield when the blades hooked the runway. At present, a special commission of the Aerospace Forces of Russia is working at the airport, which should establish the exact causes and circumstances of the emergency.

It should be recalled that the Mi-8 (product number "80", according to the NATO classification "Hip" - "Hip") is a Soviet / Russian multi-purpose helicopter, which has been produced in various modifications since the early 60s of the twentieth century.

Previously we Reportedas on September 3, 2019, the Su-25UB attack aircraft crashed in the Stavropol Territory. As a result, two members of his crew died before they could eject.
Ctrl Enter
Noticed oshЫbku Highlight text and press. Ctrl + Enter
We are
Russian military helicopter crashes
IAC constantly painted the SSJ-100 catastrophe and the crew’s actions
Reporterin Yandex News
Read Reporterin Google News
Ad
We are open to cooperation with authors in the news and analytical departments. A prerequisite is the ability to quickly analyze the text and check the facts, to write concisely and interestingly on political and economic topics. We offer flexible working hours and regular payments. Please send your responses with examples of work to [email protected]
Information
Dear reader, to leave comments on the publication, you must sign in.