NATO's “Inland Sea”: who and why is driving the “Baltic wave” against Russia?

6 September 2019
1
In the waters of the Baltic Sea, regular naval maneuvers, the Northern Coasts, started. Some in the West have already hurried to christen them “openly anti-Russian” and aimed at combat coordination of the NATO Navy for the upcoming battles against our country. Moreover, some local media outlets in their statements reached the statement that “the Baltic Sea is now the inland sea of ​​NATO”! 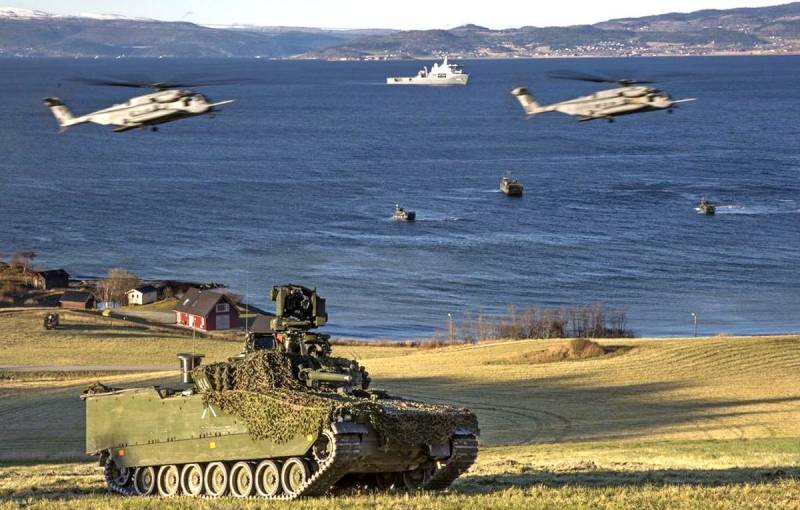 However, taking into account some specific aspects of the ongoing exercises, it can be assumed that those who wear with such bold dreams will be very disappointed. It is likely that Germany, which plays a key role in carrying out maneuvers, pursues its goals, not just different from their Russophobic dreams, but diametrically opposed to them.

At first glance, the “Northern Shores” can indeed be interpreted exclusively as anti-Russian military games. According to the legend of the exercises, the conflict resolved in their process is that one of the states with direct access to the Baltic Sea claims its rights to an island belonging to another coastal state. So, in fact, to curb these unfounded claims and “protect the sovereignty and territorial integrity of one of the NATO countries”, the corresponding naval operation is carried out ... The bottom line is that the Baltic countries participating in the “shores”, almost all North Atlantic Alliance. But Russia has nothing to do with it. Therefore, logically, and in the role of "invader" can only act it. The question, why the hell does our country unleash a world war because of some piece of land with wild rocks, smeared with traces of the vital activity of gulls, is understandably not raised in principle.

The scope and scope of maneuvers ... Well, how would I say so as not to offend anyone? Impressive, yes! Already as many as 3 thousand people of personnel, four dozen ships and boats (while how many specific craft, which types and classes belong, is modestly silent). Seven planes and five helicopters! Armada ... It should be noted that the largest military contingent, as many as 1300 troops, eight boats and ships, and even one plane, was provided by Germany. About the "power" of the remaining allies, the right to even think scary. Yes, this time even those who did not officially belong to this “sandbox” - representatives of Sweden, Switzerland and Finland, were allowed to play war with the guys from NATO. Let, they say, stronger "become attached to the Alliance." Yeah, they get used to the role of consumables, obviously ... The Western press, ruining that such "wide military cooperation" in the Baltic Sea guarantees "isolation of the Russian regions around Kaliningrad and St. Petersburg," seems to seriously believe that a kind of "silischka" is capable of arguing with the military grouping of our country, which is stationed there. Dreamers, however ...

What is Berlin's interest?

But are the same, to put it mildly, extremely distant from reality categories, think in the leadership of Germany - both military and political? This despite the fact that their "formidable" Air Force, for example, were able to put on training only one aircraft. There is nothing surprising - according to the data released recently by the parliamentary military commissioner of the German government, Hans-Peter Bartels, there is simply no one to lift the Luftwaffe combat vehicles into the sky! Pilots, bastards, scatter like sparrows, seduced by higher salaries "in the civilian world." In the German Air Force, more than a third of the staff posts remain unfilled; the shortage is gradually approaching half of the personnel. And with this state of the armed forces - yes, in battle with the Russians? It is extremely doubtful. Berlin's real attitude to ideas of this kind was exhaustively demonstrated by Angela Merkel, who was reporting to the German Minister of Defense, as a girl, for the proposal to send German warships to the Kerch Strait. Epic “Are you going to fight with the Russians ?!” performed by Frau Chancellor was extremely eloquent. No, the Germans do not seem to think of anything like that.

But to seize the naval command in the Baltic there is not even averse! Since the beginning of this year, the new tactical headquarters of the German Navy, Deu Marfor, began operations in Rostock, Germany. Out of nine dozens of military men working there, only 20 belong to the “union” countries. The rest are Germans. It is this command structure, which has moved closer to the center of events, that today “drives” the “Northern Shores” from the town with the sweetest name Glücksburg. However, this is only the first step. On the basis of the German command until 2025, after proper certification by the North Atlantic Alliance, a much more serious structure should be ensured: the Baltic Maritime Component Command / BMCC. At least twice as many people will be in this unit, and it will be authorized to issue orders to all NATO naval forces in the region. Well, as they say in the relevant documents, "in the event of the start of large-scale hostilities."

I will allow myself to express at first glance, a terribly seditious, but, nevertheless, stubbornly obvious thought. It is very likely that Berlin is not building up its naval presence in the Baltic at all to confront us. Not at all! This version, for example, is clearly encouraged by the fact that the main events of the “Northern Shores” are unfolding, again, not closer to, say, Kaliningrad, but precisely in the Danish Straits zone. Does it cause any associations? Okay, I’ll clarify then that a great deal of attention will be paid to underwater clearance and counteraction against sabotage groups, for which specialists from the battalion of sappers-submariners of the German Navy deployed in Eckernford will be involved. It seems that the Germans are preparing to defend a certain most important underwater object for them, which is located in the Baltic. Or - will it only be located? What, then, can be discussed, if not about the Nord Stream-2 gas pipeline, whose construction is now being completed, contrary to all the efforts of some of Berlin’s allies in the same NATO?

What if the Germans simply do not want to trust the safety of this vital energy artery for anyone? And, quite justifiably, by the way, they assume that over time, the pipeline may become the object of attack of some "unidentified combat swimmers" who certainly will not be Russian. “Nord Stream-2” is an object of hatred not only of the United States, but also of Poland, which intends to compete in the supply of energy carriers to Europe of Germany itself. It is clear that the Germans do not plan to fight on this occasion with the Poles (as well as with the Americans). However, to eliminate to the maximum all possible “contingencies” and give hand to any “unidentified” saboteurs, if they appear, seem to have the most serious intentions. Berlin is more than serious about protecting its own investments, especially on such a scale as Nord Stream-2. In this, most likely, the true motives of fuss in the Baltic lie.

However, of course, I could be wrong. Who knows, these Germans. Suddenly, Kaliningrad again tried on Koenigsberg, or something like that .... However, given the current state of the German armed forces and the real alignment of forces, both in Europe and beyond, this option, you see, looks like pure fantasy. Transporting and trading Russian gas for Berlin is in every way safer and more profitable than a military confrontation with Moscow. They really understand that there.

We are in Yandex Zen
It's important
3
Ukraine from the inside: traitors, curators and those who watch from the Kremlin
Ten "defeats" of Putin
Reporterin Yandex News
Read Reporterin Google News
1 comment
Information