6 September 2019
2
President Donald Trump created his own Space Forces in the United States, since "space is the next area of ​​military operations." However, the undeclared militarization of near-Earth space has been de facto for a long time. Bypassing international security agreements, the leading space powers, the USA, the Russian Federation and the PRC, developed the so-called “satellite inspectors”, which later received the unspoken nickname “killers”. 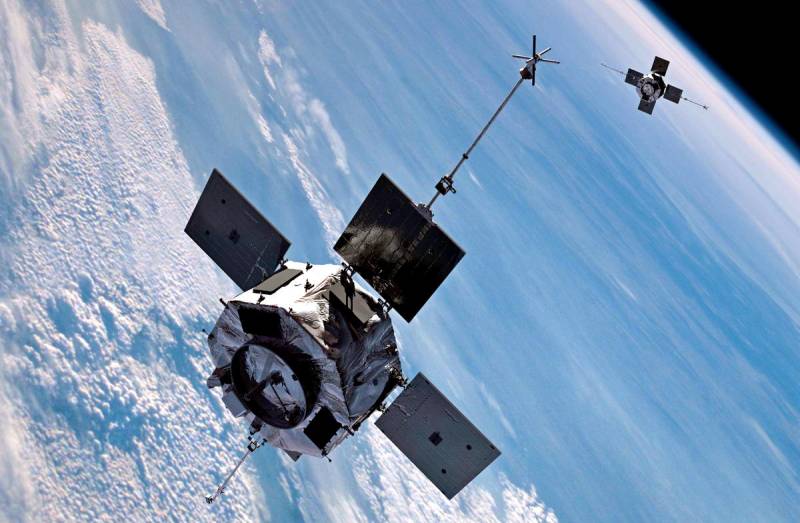 What is a satellite inspector? This is a device designed for external inspection of other space objects, primarily the satellites of potential enemies. This is not a useless thing, because for the sake of saving weight, special equipment on satellites, as a rule, is not masked. But even more important is the function of the ability to eavesdrop on someone else's radio. Such devices are not armed, therefore, do not fall under the agreement on limiting the militarization of space.

The first to begin to "inspect" all, as is customary, the Americans. Two small-sized MiTEX satellites were launched into orbit in 2006. Three years later, the United States PAN electronic intelligence apparatus began to actively “eavesdrop” on everyone. In 2010, the Pentagon launched the Space Based Space Surveillance satellite, equipped with sensors and a telescope, followed by four more similar devices, which began to monitor other geostationary satellites. Their real capabilities are classified.

In 2017, the Americans began not only to “eavesdrop”, but also to actively “spy” with the help of a large telescope mounted on the ORS-5. The culmination of the development of this spy program was the mysterious mini-shuttle X-37, which for years can be in orbit and maneuver. Theoretically, its technical capabilities can even allow the abduction of other people's satellites, not to mention the destruction.

Actively trying to catch up with the United States in China. They developed specialized satellites Chuang Xin 3, Shiyan 7 and Shijian 15, equipped with robotic manipulators. Officially, their goal is to fight space debris, but for some reason, curious Chinese conducted experiments to collide their devices.

Russia simply had to not stay away from such near-Earth exploration. In 2013, potential opponents with unpleasant surprise found that the “space junk” suddenly began transmitting telemetry, turning out to be the Russian satellite “Cosmos-2491”. In 2014, the Cosmos-2499 inspector was launched into orbit, and in 2015, the Cosmos-2504 inspector. These babies, weighing about half a centner, were delivered without a pump by the Rokot launch vehicles along with other satellites.

But in 2017, things went to a more serious level. The satellite-inspector Cosmos-2519 was so large that it alone had to be launched on a Soyuz-2.1v rocket. Russia immediately warned that the apparatus would be engaged in both the exploration of outer space and the Earth survey. An unpleasant surprise for competitors was that another Cosmos-2519 spacecraft separated from Kosmos-2521 and began to maneuver.

Now "Cosmos-2521", daily, at least ten times passing over the USA and Canada, does not give rest to the American military. For two years now, NORAD has been tirelessly following the Russian satellite inspector, who was nicknamed the "killer" in the press.