Missile shield: can the US escape from “Russian hypersound”?

5 September 2019
48
Feverish gestures to create some kind of “reliable protection against hypersonic Russian missiles” have been made by the United States almost since the moment when the President of Russia, Vladimir Putin, very clearly and intelligibly explained to our “friends” the inevitable sad prospects for them in the event of a global armed conflict, and accompanied his words with a demonstration of the latest domestic weapons. 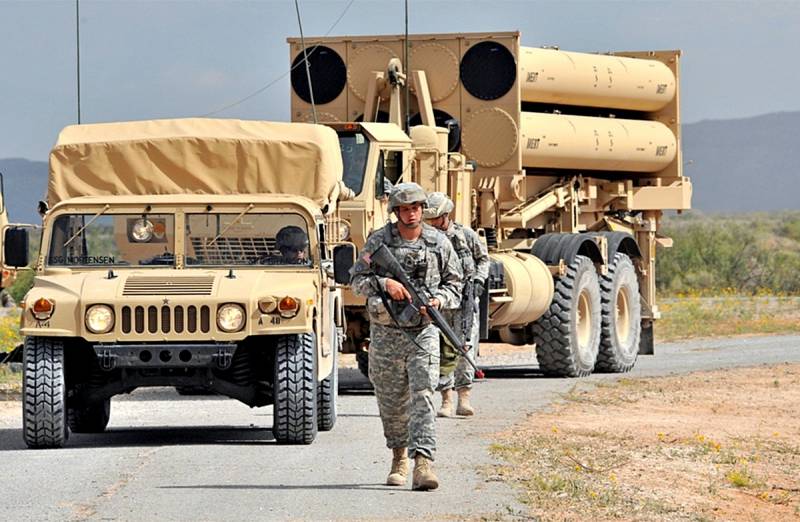 Honestly acknowledge that America’s complete inability to protect fellow citizens from the inevitable and crushing blow of retaliation politicians pride, wounded to the limit, does not give: the Pentagon generals the notorious “uniform honor”, ​​and the big-time military industry corporations are afraid of losing their own superprofits. Here they are all together and trying, as best as they can. What is the result of this? I'll tell you now.

As it became known, just recently, a tender ended in Washington, during which the "grandees" of the military-industrial complex there were striving for the right to become the creators of not just a new missile defense system for the United States, but, specifically, a complex designed to protect the country from hypersonic weapons. The results, however, did not surprise anyone, for they were quite predictable. The United States Anti-Ballistic Missile Defense Agency (MDA) has entered into relevant agreements with Lockheed Martin, Boeing, and Raytheon. It was they who were entrusted with the “forging” of the very “shield” that should save the United States from the terrifying “Russian hypersound”. Well, or rather, for now to develop projects for such a shield. It was determined, I must say, not in a hurry - the competition for the development of “systems designed to intercept and destroy aerodynamic and aeroballistic targets with hypersonic speed” was announced by the Pentagon Advanced Defense Engineering Agency (DARPA) in conjunction with the same MDA a year ago - in November 2018. Take your time ...

A characteristic feature of the fairly delayed process was that, in fact, the main technical details of the task, that is, specific requirements for equipment and technologythat the Pentagon wished to receive "at the exit" were absent in the open tender documentation as top secret. Only those companies that, having passed the registration and verification to participate in the competition, were allowed to get acquainted with them. In the same way, no details regarding those systems that are selected for subsequent implementation are completely not advertised. Only the names of development corporations and the big names that they have already given to their future offspring are known. So, Boeing, which has been badly battered recently by the hardships that befell his business, will work on the HYVINT system, Raytheon promises to make the American guardians of the sky happy with a certain SM3-HAWK system, and Lockheed Martin promises to take his mind off the riveting of the all-new F-35s and surprise the world with the Valkyrie complex. Everything is loud, everything is secret.

What do we have? There is nothing!

However, some assumptions as to what exactly corporations will do can still be made. It is worth starting from the revelations of none other than Michael Griffin, US Under Secretary of Defense for Research and Development. At the end of last year, this senior Pentagon official openly stated that the United States currently does not have any of the many components necessary to create any kind of effective protection against "hypersound." According to Griffin, the American missile defense does not have, first of all, the main thing - the ability to provide accurate and complete radar coverage of its own borders and territories adjacent to them. The United States simply does not have radars capable of operating in the long-range viewing mode and monitor the space for tens of thousands of kilometers. Given the speed of hypersonic missiles, their later detection is essentially tantamount to a lack of detection, as such. The satellites of the United States military space group also cannot ensure the fulfillment of this task. The same deplorable situation is observed with the means of destruction of enemy missiles. Not gonna get us...

To solve the problem, if we believe the deputy head of the Pentagon "in science", his department is going to by means of placing in low Earth orbit, in fact, an additional network of new generation surveillance satellites. It is also planned to create fundamentally new interceptor missiles capable of destroying hypersonic targets as far away from their own territory as possible, "catching" them on the cruising section of the flight, at the time of reduced maneuverability. Tasks, as we see, are very difficult and hardly solvable “on the fly,” and the US (where rather big) will fly a pretty penny (sorry, cent). According to data leaked out after the tender, each of the corporations mentioned estimated its research work at almost $ 4.5 million. So then the research! And how it comes to practical implementation ... The appetites of Lockheed Martin, who create the “newest fighters”, which are at their own weight in gold, are well known. According to the terms of the competition, finished projects must be submitted to a strict military court no later than the beginning of May next year. There are only very serious doubts about the way it will be.

The thing is that just two of the three corporations that won the tender - Boeing and Raytheon, have already "created" a missile defense system for the United States! It’s just that these attempts ended in a complete and extremely expensive fiasco. The Pentagon, by the way, announced the complete closure of this project almost simultaneously with the completion of bidding "for hypersound." The most unpleasant thing is that, in the program that turned out to be completely hopeless, at that time 1.2 billion US taxpayers' money had already been swollen, which, of course, no one would return. After all, they all “went into action” - to develop, again, a “new generation” of missile defense. True, designed to withstand "ordinary" ballistic missiles. Today, the United States has 44 silo-based interceptor missiles that cover them from intercontinental hotels, most of them deployed in Alaska. The War Department almost with a knife at the throat shook out Congress funding to increase the number of missile defense systems until 2023 by another two dozen. And I decided, on my own head, that they must be “improved” and “modernized”.

That's just the money, it seems, fell into the wrong hands. As a result, work on the project was discontinued, as well as its financing. As an official reason for making such a decision, the Pentagon put forward simply a pretty cuteness: the technical problems that its developers faced are so serious that they are either "absolutely insurmountable" or ... Their solution will require sums of such orders that they should be read out Congress does not dare even the bravest of the generals. I can’t resist the malicious question: what, in order to bury ourselves in a kind of epic dead end, you certainly had to throw out a billion dollars or more? Previously did not see?

However, evil languages ​​inevitable in this case say that the “latest developments”, which Raytheon and Boeing tried to foist at the Pentagon for crazy money, were simply hopelessly outdated. And this, again, before the first attempt at their practical implementation. As for attracting by the military all the same “geniuses” from all the same corporations to a new project, which, for sure, will prove even more costly ... Well, as they say, the rich have their own quirks. There is a suspicion that the American army will receive protection from hypersound in the same way as new anti-missiles. All that remains for Washington warriors and politicians to recommend is to buy a large batch of Borjomi from their best friends. It will be the most for this case.

We are in Yandex Zen
It's important
9
Putin and Lavrov have done their job. General Shoigu, your way out!
Ten "defeats" of Putin
Reporterin Yandex News
Read Reporterin Google News
48 comments
Information