What if China throws Russia with the CR929?

1 September 2019
22
At the MAKS-2019 air show, its visitors had the opportunity to visit the fuselage of the joint Russian-Chinese CR929 aircraft. The product of cooperation between the two countries is designed to destroy the existing duopoly of Boeing and Airbus. Can the CR929 be able to do this, and with what will Russia remain if its paths with China eventually diverge? 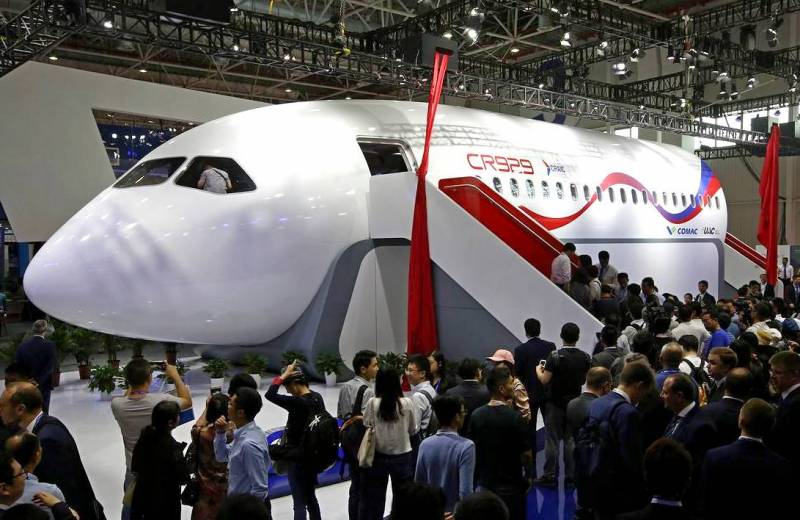 CR929 is a promising long-haul liner, modifications of which will be able to carry from 230 to 320 passengers. In my time, technology Only the USSR, the USA and France possessed the manufacture of wide-body liners. Now China is planning to enter this specific niche, using the remaining Russian experience and competence.

The abbreviation of the project itself indicates that China is a senior partner in it, and the Russian Federation - a junior. Our country will have to develop and create wings, while Beijing will be engaged in the production of the fuselage and the final assembly, which will be carried out in Shanghai. At the initial stage, the liner will fly on American or British engines, subsequently they can be replaced by currently developed domestic PD-35. At the same time, the financial burden, estimated at $ 20 billion, is divided equally between the parties.

For the modern Russian Federation, participation in the project is considered a good chance to enter the major league of aircraft manufacturing. However, even now in the Russian-Chinese sky, not everything is so cloudless.

At first, there are questions on components for a wide-body aircraft. Russia is under ever tougher sanctions, and China is in a state of trade war with the United States. Initially, the CR929 project was built on the basis of broad international cooperation, but now there may be problems with the supply of components from the United States and allied countries.

First of all, this can affect American and British aircraft engines. Recall that the PD-35 is still under development. Therefore, now there are questions about the exact dates of the first flight of the Russian-Chinese liner.

Secondly, not the best way against Russia can play the fact that it is in the project as a junior partner. For our country, the whole point of participating in it is to gain equal access to the promising Chinese and Asian markets as a whole. It is estimated that in aircraft of this class the PRC needs are estimated at 1200, for comparison, Russia - from 50 to 120. So, CR929 could be the first truly commercially successful project of the domestic aviation industry.

But here, not everything is smooth. Last year, Russian media reported that the parties could not agree among themselves on who would hold the certificate for the liner. Moreover, it was reported that allegedly the Chinese state corporation COMAC proposed Russia to split the sales. That is, the Chinese sell CR929 themselves in their own market, and our country - in their own home and in the international market, where, judging by the example of the Superjet, we are not brilliant in this.

However, subsequently, “UAC” disavowed this information, allegedly, the Chinese did not even think to offer anything, why would it suddenly. But the sediment, as they say, remained. The documentation for the liner is good, the wings are also, but this is perhaps all that will be on hand if the PRC suddenly decides to go further on its own. They themselves will make wings, if necessary, we can’t even ban the supply of aircraft engines to them, since we have a banal PD-35. By the way, the Chinese themselves have already entered Motor Sich.

What will Russia do if Beijing ceases to need its services?
Ctrl Enter
Noticed oshЫbku Highlight text and press. Ctrl + Enter
We are
NEWs MAX-2019: what Russia boasted
Peace enforcement operation. Russia inflicts a preemptive strike on Kiev
Reporterin Yandex News
Read Reporterin Google News
22 comments
Information
Dear reader, to leave comments on the publication, you must sign in.