August 30 2019
16
To all the other, already very serious troubles of the American Aircraft Corporation, it seems, one more problem was added. Moreover, if you think about it, it poses even greater threat to Boeing than those troubles that have already struck it so far. This is a lawsuit filed against the corporation by the Russian company Aviakapital-Service. 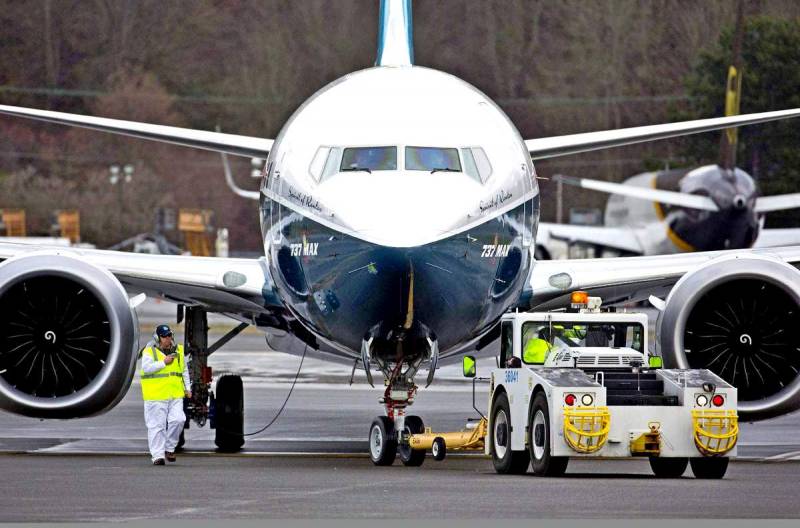 This event risks becoming the first link in a chain of fatal events that the industrial giant, which is one of the symbols of the United States, may not survive. Why did this happen and what risks does the ordinary, at first glance, lawsuit bears not only aircraft manufacturers who became its defendants, but also the whole American the economy generally?

They didn’t want to

What, in fact, is the essence of the matter? One of Rostec’s leasing subsidiaries, Aviakapital-Service, in March 2019 placed an order for the purchase of 35 Boeing 737 MAX. This happened, understandably, before the entire series of medium-range airliners, which was popular until recently, was sealed with the “killer plane” stamp. The death of more than one and a half hundred people in its crash over Ethiopia, which added to a similar disaster in Indonesia, which claimed about two hundred lives, finally put an end to trust in this entire line of aircraft. As it seemed then - not for long. However, almost half a year has passed, and the problems with the 737 MAX can not see either the end or the edge. Instead of reassuring the current owners and potential buyers of problematic liners, all new checks conducted by aviation security experts find more and more flaws in it that carry potential threats. Obtaining permission to operate them, accordingly, everything is being delayed and delayed, and at the same time, the issue of purchasing new aircraft, including those already ordered in different parts of the world, “hangs”. Sooner or later, this situation would inevitably have resulted in lawsuits. The only question was who the nerves could not stand the first ...

They could not stand our compatriots. When they were notified by Boeing that deliveries of aircraft, which, according to the terms of the contract, were supposed to begin this fall and be completed within three years, were shifted “for only a year or two and a half,” AKS appealed to the Cook County Court (Chicago). The claims put forward by her against an American corporation are harsh but fair. The company demands not only to return the prepayment made to it (with all the required interest) (this is $ 35 million), but also to compensate for the twice-received profit it received as a result of such a “successful” transaction - $ 75 million. At the same time, advocate Stephen Marx, who defends the interests of AKS before the US Themis, said that his clients, in principle, were ready to solve the problem without bringing the case to court. However, Boeing did not want to make such a deal. According to the lawyer, the compensation proposed by the aircraft manufacturers of the Russian company, its representatives did not suit categorically. Well, now the Americans can only blame themselves - the Russians, annoyed by their thirst and intransigence, decided to deal with their opponents, as they say, "in full."

It's only the beginning?

In their lawsuit, they not only complain about Boeing’s supply disruption, but directly accuse them of criminal negligence in the development of the aircraft, which was the direct cause of two fatal disasters. Moreover, in their opinion, the corporation also has the responsibility for knowingly concealing during the certification process of the liner “information critical to the US regulator” about possible problems with it. But this is no longer a joke. If Boeing’s lawyers are unable to “recapture” these charges in court, the company's business reputation, which is already in the balance, can be considered buried forever. It is not difficult to guess the other consequences either. Let me remind you that the legal system of the United States is a precedent. That is, a single court decision on an important matter automatically becomes, as it were, a model, a standard for resolving all other similar claims. Today, Aviakapital-Service has become the first company in the world that has decided to fully recover from Boeing for its losses. There is no doubt for a second - the result of the process around the world will be watched with much greater interest than the world soccer championship. Who! Yes, all those who, if the Russians are successful, will line up in the long run for the United States courts to solve their problems in the same way.

Yes, Boeing seemed to be preparing for such a turn of events. In any case, the company announced that it had already allocated about $ 5 billion in compensation payments to potential complainants. It would seem - well, against this background, the 115 million that AKS wants to claim from it? A mere trifle ... Do not rush to conclusions! Only in Russia, Nordstar, Pobeda, Ural Airlines, S7 Airlines and Utair airlines expect another 73 aircraft of the 737 MAX series from Boeing. Their deliveries were to begin, again, this year. And now - even more interesting figures: by the time of the second tragedy, which had finally completely landed this model, the corporation managed to receive orders for nearly 5 thousand such airliners. We add about four hundred more of these boards, already in operation and now idle in the hangars, introducing their owners into considerable losses (according to some estimates, up to a quarter of a million dollars a day for one aircraft). Will there be enough declared billions for all compensation ?! It is rather doubtful - given that the failure of the contract for only 35 aircraft, corporations could result in more than a hundred million. But a number of air carriers have already announced their willingness to force aircraft manufacturers to fork out for losses incurred. In particular, representatives of Norway, India, Poland, a number of Chinese airlines ... And if the Americans still agree with the Scandinavians or Poles, then it is unlikely with the Chinese, especially taking into account the current realities.

Considering the situation, one should also take into account the fact that in the five months that have passed since the last fatal accident, the concern, quite expectedly, did not receive a single new order for the 737 MAX, which had gained notoriety. It is unlikely that they will follow, at least in the near foreseeable future. In general, things are getting worse and worse for the corporation - the supply of its aircraft has decreased by almost 40% compared to last year. July sales of 19 aircraft worldwide were the lowest in the previous decade. But will it still be if Boeing’s irresponsibility, its willingness to deceive state controllers and risk their lives for their own profit, is recognized and recorded in court? It may very well turn out that in this case the company will have to forget about any orders at all. But "holy place", as you know, is never empty! The main competitor of the Americans, the European corporation Airbus SE, without losing time, uses the current situation, as they say, "to the fullest." During the same time, while Boeing with great difficulty lost less than two dozen sides, Europeans managed to supply customers with more than four and a half hundred aircraft. Already there are examples of refusals from contracts concluded earlier with American aircraft manufacturers just in favor of Airbus. What's next?

If the process in the Cook District Court opens the Pandora’s Box and the Boeing rush with claims from all sides, the corporation may not resist. At a minimum, this wave is practically guaranteed to bury the 737 MAX, the hopes of which are back in operation are already very illusory. And here is the time to recall the forecasts made this spring by experts at the American bank JPMorgan. It was easily calculated there that a refusal to manufacture this model, at least until the end of 2019, would cause corporations more than $ 31 billion in damage. But this is absolutely inevitable - representatives of the US Federal Aviation Agency (FAA) have already announced that there can be no question of obtaining a certificate with this model that gives the right to resume flights earlier than 2020. At the same time, according to the estimates of the chief economist of the aforementioned bank, Michael Ferolli, made shortly after the disaster in Ethiopia, the cessation of the release of 737 MAX alone will make a 0.6% hole in the national GDP. The question regarding the option with the complete collapse of the corporation, this financier even refused to discuss. Obviously, I could not pick up censorship words. It would seem that on a US-wide scale, one company, even as powerful as Boeing, cannot play a fatal role. However, it must be borne in mind that the US economy is already far from being in the best condition, and ahead is a new, even tougher round of the "trade war" with China. In addition, do not forget that in any disaster there is always the notorious "last straw". The global crisis of 2008 began with the bankruptcy of a single American bank ...

How large-scale and destructive will the consequences of a lawsuit filed in an American court by a Russian company be? I think we all will find out soon enough.

We are in Yandex Zen
It's important
31
Legend catastrophe: Boeing suffers one defeat after another
US Global Economy: An End That Sneaks Noticeably
Reporterin Yandex News
Read Reporterin Google News
16 comments
Information