August 30 2019
9
In July 2014, a Boeing of Malaysian Airlines was shot down over the Donbass, where active fighting was taking place at that time. As a result of this tragedy, nearly three hundred innocent people died. Five years later, the Joint Investigative Group of representatives of countries whose citizens were on board called the “culprits”. It is noteworthy that from Malaysia, whose plane was destroyed, there was no one at this event. 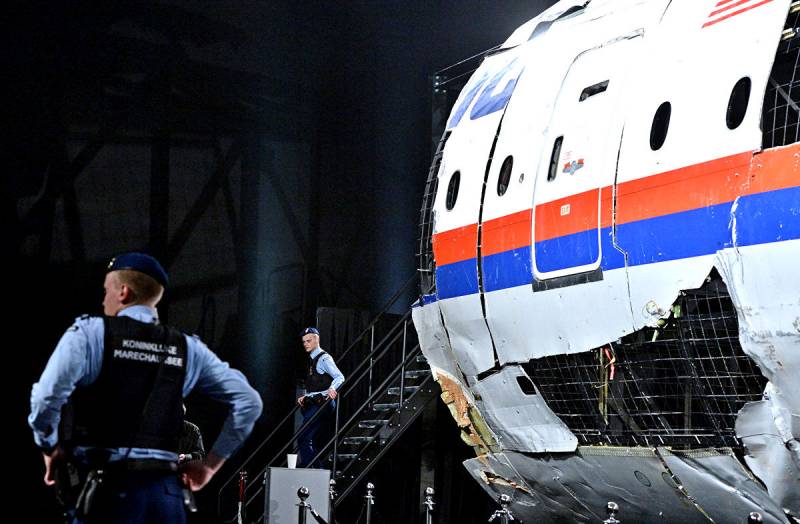 According to Western investigators, the “guilty” of the death of flight MH17 were “Igor Girkin (Strelkov), Sergey Dubinsky (Petrovsky), Sergey Pulatov and Leonid Kharchenko:

The prosecutor's office believes that four suspects, based on the fact that they planned their cooperation and their actions in July 2014, led to the flight MH17 being shot down. Although they themselves did not press the buttons, we suspect that they worked closely to get the Buk system and deliver it to the launch site in order to bring down the aircraft.

Despite the general revealing pathos, somehow behind the brackets remained the motive of “knocking down the plane”. The aforementioned Russians are former high-ranking employees of the Russian special services and are quite sane people. Why should they or their “curators from the Kremlin" destroy a civilian airliner with hundreds of passengers on board in a zone of active hostilities, attracting the attention of the entire world community when the militia attack was very active?

The answer is simple: there is no need. But this motive made sense for the opposite side of the conflict. As a matter of fact, after the Boeing, all of LPR’s offensive activity was curtailed, and OSCE observers came to the front line, who clearly began to play along with the Armed Forces of Ukraine. Considering that the Buk’s are in service with the Ukrainian army, which has already been noted by the downing of a civilian aircraft during exercises, the case becomes completely sewn with white thread.

All these inconsistencies are striking to any unbiased observer. It is noteworthy that Malaysia, in theory, the main victim in the case, holds a similar point of view. State authorities urge the world community to refrain from allegations against Russia. In fact, of all the results of the investigation of the openly politicized and engaged Investigative Group, Malaysia only agrees that the Buk was produced in the USSR. As a matter of fact, there is no contradiction with Moscow’s view of the situation here, since the Ukrainian Buki are also of Soviet origin.

Why does Malaysia not keep up with Western experts? Judge for yourself.

Representatives of this injured party demanded not to touch the wreckage of their plane and not to move them anywhere. But this was not done, the Dutch themselves appointed themselves the main victims and did not allow Malaysian experts to study the wreckage of the Boeing. They also were not allowed to decrypt the data of the “black box”. Then, at the request of Kuala Lumpur, a specialized company studied audio recordings of dispatcher talks and found traces of their installation. At a press conference where Western investigators accused the Russians of the death of the liner, representatives of Malaysia were not even invited.

All this smells very bad. Therefore, Kuala Lumpur did not recognize most of the findings of the investigation team, accusing it itself of politicization. Interestingly, immediately after this, the Malaysian authorities began to accuse of corruption and large-scale theft. In relation to the head of the local government, whose, incidentally, a relative was flying on a lost flight, the United States opened a criminal case.

So think about who actually shot down the Boeing.

We are in Yandex Zen
It's important
13
Ukraine from the inside: traitors, curators and those who watch from the Kremlin
Ten "defeats" of Putin
Reporterin Yandex News
Read Reporterin Google News
9 comments
Information