Su-57 for Turkey: will Russia make a mistake? 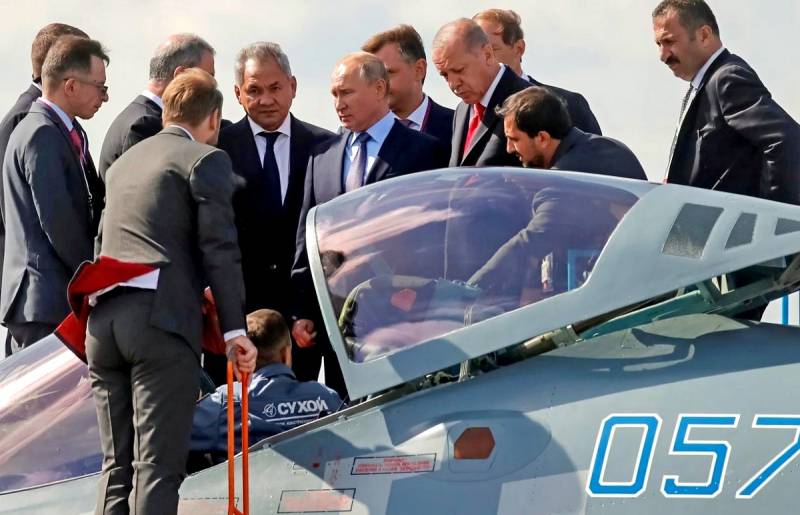 At the MAKS air show in the Moscow region, the visit of the Turkish president was the main media event. Recep Erdogan ate ice cream and asked the price of Russian combat aircraft. When asked about the possibility of Ankara acquiring a fifth-generation fighter Su-57, his Russian counterpart, Vladimir Putin, answered in the affirmative. Will this be a good deal for Russia, try to figure it out.


Being the second strongest country after NATO in NATO, Turkey is very seriously dependent on the “hegemon” and the EU in the militarytechnical sphere. Ankara is trying in every possible way to gain access to high technologies, participating in the process of cooperation with leading powers. Turkish Aerospace Industries (TAI) has even managed to obtain an American license for the production of the F-16. Turkey tried to go into the project of creating an ultramodern F-35: the share of its components in the fifth generation fighter reaches 6%. However, after buying the Russian S-400, Washington decided to punish Ankara by throwing it out of the project. The transfer of hundreds of Turkish aircraft was blocked. Hence the unexpected interest of President Erdogan in Russian military aircraft.

What is he ready to buy?

Su-57, of course, is the most important object of attention of Turkey. Fifth generation fighters possess only two countries in the world - the United States and Russia. If the United States turned away from Ankara, then it turned away from the USA to Moscow. But besides the Su-57, the Su-35 may also be of interest to the Turkish Air Force. These 4 ++ generation airplanes are real “workhorses”, optimal in terms of price and quality for an understanding buyer.

A possible deal for the sale of Russian aircraft to the Turks has both positive and negative sides. The pluses include an ever-deepening split within NATO. If this continues to continue, then the second most powerful army in the alliance will no longer dance dutifully to the tune of Washington. In-depth military-technical cooperation with Moscow will objectively contribute to greater loyalty on the part of Ankara, although it is also not worth having extra illusions on this score.

The obvious disadvantages include the fact that Turkey does not even think about leaving NATO. That is, the S-400, Su-35 and Su-57 will stand in the arsenal of our enemy in the North Atlantic Alliance. Selling such powerful and modern weapons is always a step politicaltestifying to friendly relations between the countries. About Turkey, while it is part of NATO, this cannot be said. Do not forget that just a few years ago, the Turks easily shot down our Su-24, Russian soldiers died.

In addition, there are doubts about economic the benefit of such a deal. Even Ankara clearly bought the S-400 at a discount, no more than half the amount was paid in cash, the rest - on credit. The Turkish economy is in poor condition, the lira continues to fall. If the sale goes, as it is now fashionable, in national currencies, then Russia will clearly not be in particular benefit from the sale of a batch of the most modern fighters.

Apparently, all of these risks prompted Moscow to offer Ankara a compromise option. As you know, Turkey is trying to develop its own fifth-generation fighter called TF-X (Turkish Fighter X). Due to the lack of experience, the Turkish side is ready to cooperate with the Americans, and with the British, and with the Swedes, and with Italians, and even with the South Koreans, in using advanced technologies.

The most difficult is the issue of creating a jet engine. The Turks had their hopes in General Electric, but this will obviously also put an end to it. Dmitry Shugaev, representative of the Federal Commission for Military-Technical Cooperation, announced his readiness to help Ankara with an engine for its TF-X and electronic warfare equipment. Well, this is a perfectly sane alternative to transferring the Su-57 to the Turks, which will more closely tie them to the Russian military-industrial complex.