“Kuzkina mother” for a hurricane: trump is preparing a nuclear strike on climate

August 29 2019
2
The current owner of the White House is able to surprise the world, even as he knows how ... The stunned world community had no time to move away from News about his attempts to buy, “on occasion,” a little Greenland, and the initiative to revive the GXNUMX with the participation of Russia, which immediately received an even more shocking topic for discussion. It turns out that the President of the United States repeatedly and completely seriously put forward ideas about delivering nuclear strikes against regularly and severely tormenting US coastal (and not only) states hurricanes! The force was dissuaded. 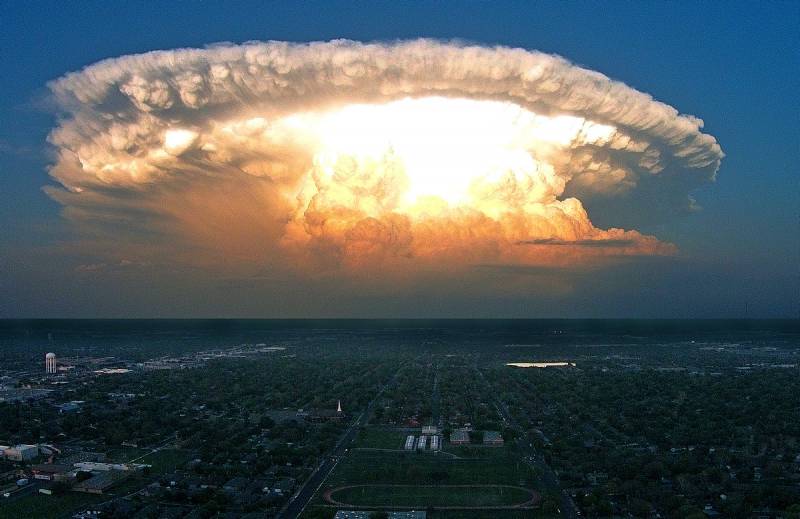 One way or another, but such news, given that we are talking about a state leader with one of the world's largest nuclear weapons arsenals, raises at least two serious questions.

It should be noted that Donald Trump himself on the publication of the American portal Axios, which disseminated this information, responded to Twitter very sharply. In an absolutely categorical form, he called the journalists liars:

I never said that! Another fake news ...

This, however, does not convince. Firstly, it is far from the first time for the president to shake off his own words, abandoned in a hurry or in a situation that does not seem to involve a "drain" of information. With the same Greenland, he also claimed that, they say, did not think about anything like this. Until the intention to acquire the island at a reasonable price was not officially confirmed in Washington. Well, and secondly, personally, for example, I am inclined to believe in this story simply because Trump appears in it! And it is no accident that after spreading the message about his plans to “bomb a little” the hurricanes, the hashtag #ThatsHowTheApocalyseStarted was born and instantly gained the widest popularity in the same USA - “This is how the Apocalypse began”.

Donald Trump in itself is the walking Apocalypse. With direct access to the "nuclear case", alas ... All of its external policy conducted according to the Napoleonic principle: "Get involved in a fight, and then we'll see!", which ultimately left the great Corsican sideways. The "trade war" with China is the clearest example of this. As, by the way, and rocket fire of Syria at the time of the presence of Russian troops there. This same “opera” also includes his periodically striving to shy away from anything in Iran, or arrange an intervention in Venezuela. However, someone may object that all this is only indirect evidence. Well, here you go! The press service of the White House, where the media representatives, slightly overwhelmed by such news, turned for comment, instead of turning a finger at the temple and categorically refuting the very possibility of such craziness, answered extremely vaguely and evasively, saying that it could not comment on “private conversations, which may or may not have been conducted by the president and his team on matters relating to national security. "

As you want - so understand. And this despite the fact that employees of the relevant structures of the presidential administration are obliged to observe the image of their patron more than the young bride - her innocence! Pretty strange answer, don't you find? By the way, giving out a sensation, Axios referred not only to traditional “informed sources”, but also to certain minutes of meetings of the US National Security Council, in which Trump’s statements they allegedly were recorded. This, you see, is already much more serious. However, much more significant in favor of the fact that the news is not fake at all, is also evidenced by the behavior of prominent representatives of the US scientific community, instantly and completely alarmed in this regard. In particular, an immediate statement that the results of such actions would be “truly destructive” was made by such a serious organization as the US National Oceanic and Atmospheric Administration (NOAA). They don’t react to fakes like that ... They are so nervous only in case of a very real danger.

How effective and dangerous is it?

The whole point, perhaps, is that the idea of ​​"anti-hurricane" nuclear bombing has been put forward and discussed in the United States, not for the first time. Such conversations have been going on since the 50s of the last century, since the presidency of Dwight Eisenhower, one of the first American leaders to receive deadly atomic "toys" at their disposal, and arrogantly considering them the best solution to all world problems without exception. At that time, not much was known about the real consequences of the use of nuclear weapons, but in Washington, they were tirelessly building plans for their speediest use - either against the USSR or against hurricanes ... Over time, fortunately, they calmed down somewhat, but finally from the thought of nuclear violence over the invincible "opponent", did not refuse. Already in 1961, the then head of the US Weather Bureau, Francis Richerdelfer, from the rostrum of the National Pen Club talked about the possibility of "an atomic bomb in a hurricane zone located far into the sea."

True, the warlike weather forecaster then specified that they would give nuclear weapons to the hands of employees of his office only when they “clearly understand what they are doing” and can guarantee the effectiveness of such actions. But this is precisely the main snag that has not been eliminated to this day. Any attempt to combat the elements with the help of the most destructive human weapons will be, moreover, devoid of practical meaning, it is also deadly. Employees of the aforementioned NOAA authoritatively claim that any kind of nuclear charge against an already formed hurricane approaching the coast will be as "effective" as the notorious shot against an elephant. According to the data they have developed to date, only the thermal release of a hurricane is equivalent to the explosion of an atomic bomb of 10 megatons ... which happens every 20 minutes! Scientists quite rightly believe that the task of concentrating somewhere in the open ocean even half of the energy needed to “break” a hurricane is an impossible task - put at least half of the United States nuclear arsenal in use!

There is, however, one more option - to try to “work ahead of schedule”. That is, to bomb a natural disaster before it developed into its full, terrifying and insurmountable power. Weak tropical waves traveling from East to West, fraught with tropical cyclones, zones of low atmospheric pressure, which have every chance of turning into a hurricane sweeping everything in their path - that’s what they beat! The problem is that at the current level of meteorology, it is completely impossible to predict which of the generally ordinary atmospheric phenomena will develop into a natural disaster, and which will not. According to estimates of the same NOAA, the annual ratio of those for the Atlantic basin is about 80 to 5. So now, bombard the whole ocean with nuclear bombs or missiles ?! Scientists warn unequivocally about the consequences, and not at all possible, but absolutely inevitable. Nuclear strikes delivered even in the most deserted area, on a seemingly completely empty ocean, the hurricane, for sure, will not stop. But the colossal clouds of radioactive fallout generated by them, the land will be reached for sure. And it’s far from a fact that it’s not on the coast of that particular country that so hastily decided to “fight” with the world elements. In any case, the whole world will be held hostage by a powerful radioactive infection.

For Russia, this whole story has a special sound. After all, not so long ago it was Donald Trump who tried to report to her on Twitter for the accident near Severodvinsk, arguing that doing so was "bad." It’s harmful for the world ecology ... But is it okay to throw atomic bombs at hurricanes? I remember that the Persian king Xerxes went down in history as a ruler who ordered in revenge for his own military failure to whip the sea. For which he was forever sealed with the little-esteemed “title” of the crowned madman. And who do you command to consider the current president of the United States after his intentions?

We are in Yandex Zen
It's important
5
Ukraine from the inside: traitors, curators and those who watch from the Kremlin
Ten "defeats" of Putin
Reporterin Yandex News
Read Reporterin Google News
2 comments
Information