The West too late began the “Star Wars” against Russia

August 28 2019
5
So far, Russia plans to begin implementing the “lunar program”, which involves not only manned flights to this Earth satellite, but, possibly, its development, its geopolitical opponents have completely different beginnings. I want to remind you - literally this week, on August 29, the Pentagon Command of the Space Forces should be formed in the United States and begin to carry out military-service missions. 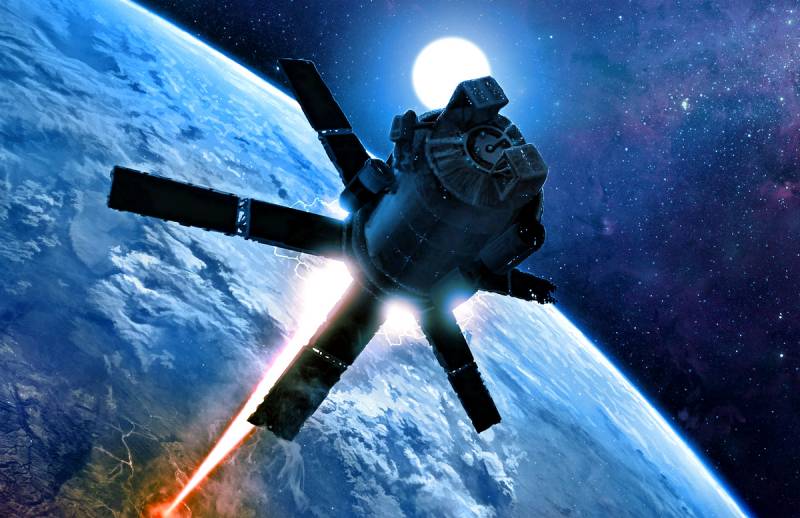 Their many allies breathe “behind the head” to the Americans - many of them, too, have the idea of ​​creating something like this, a military-near-Earth. Apparently, they’re not joking. So, can you say goodbye to a peaceful cosmos? Yes, it seems.

Of course, the Russians and the Chinese are to blame

The escalating escalation of the arms race, having easily overcome gravity, threatens to splash out into interplanetary space. Created by the decision of the President of the United States, Donald Trump, the sixth branch of the US Army, according to a statement made during the meeting of the National Space Council of the country by the Chairman of the Committee of the Chiefs of Staff of the US Armed Forces, General Joseph Dunford, is ready to "go into operation." His newly appointed commander, four-star general, John Raymond, will be transferred to the beginning of 87 units, whose task, in addition to tracking missile threats and keeping an eye on satellites in orbit, will also include providing space flights and even “conducting operations in space”. Which specifically - not yet specified. However, are clarifications needed here?

The vice president of the United States, Mike Pence, who attended the event, assured the audience that, with the approval of the Congress and the last signature of the head of the White House in the crucial matter of the militarization of outer space, he said that the Earth “needs to be protected” - because it is “so small” ... The question of who our planet really needs protection from has been clarified for doubters by Joseph Maguire, today acting director of the US National Intelligence. According to him, the threat to the "vital interests of the United States and its allies in outer space" is posed by Russia and China, which "are creating increasingly destructive weapons." It is aimed, according to the chief American intelligence officer, of course, only and exclusively on the peaceful and harmless to the US near-Earth infrastructure, which insidious adversaries sleep and see to destroy.

The threat is growing steadily!
- with such assurance Maguire concluded his speech.

It should be noted that after the demarche of Washington, which announced its military-space intentions at the end of 2018, this one found many followers and imitators. So, in June of this year, on the eve of the military parade in honor of the capture of the Bastille, the creation of the Space Command as part of the French Air Force, which should be formed in September 2019, said the local president Emanuel Macron. According to him, the country will not stint spending on “extraterrestrial defense” over the next six years, 3.6 billion euros, thereby “ensuring national security” of France, as well as strengthening its space potential. It is noteworthy that this statement coincided with the publication by the Agency for Defense Innovation of the Country (DIA) of the message that the French military intend to attract a number of science fiction writers to permanent cooperation. Those, according to the generals, will be able to “foresee and predict destructive scenarios,” inaccessible to the narrow eyes of professional servants ...

Alas, the total militarization of the cosmos, from which the masters of the dystopian genre warned us, becomes not scary, but frightening reality. Following the Americans and the French, the Japanese also gathered up for the "Star War". In fact, they planned to establish something similar there no earlier than 2022, however, seeing the growing activity of other neighbors on the planet, they decided to hurry. And while the creation of a space observation system equipped with the most modern radar and an optical telescope is expected in the country of the Rising Sun only in 2023, 70 “fighters” of the Japanese space forces will have to take up combat duty at the Futu Self-Defense Forces no later than next year. It is expected that the formation of the new unit will take place in close cooperation with Tokyo's closest military-political ally - the United States. They are going to send future “star warriors” there for training and internship, where the Japanese intend to receive technical support. In any case, the latest Japanese satellite, scheduled to launch, will receive an American sensor tracking system.

All these messages could be quite frightening if ... If not for the fact that the Russian Space Forces have more than successfully been serving since 2015. And if we talk about their forerunners - the Aerospace Defense Forces, then much longer. Today, our country has the second satellite constellation in the world (after the United States, alas) and more than enough means to ensure its security, as well as to counter any threats that may come from outer space. We ourselves are not going to threaten anyone, whatever the head of American intelligence would say. It comes to bad - then do not blame me. In the meantime, fly - we don’t feel sorry ... We should not forget that the Soviet Union, which opened the space age of mankind, carried out the first launch of an artificial Earth satellite, the first manned flight into Earth orbit and many other peaceful projects. The Americans began to drag the war into space. What was Ronald Reagan alone with his dreams of "Star Wars", during which the USSR missile shield was to be swept away by an "unstoppable" strike from near-Earth orbit. Fortunately, it did not grow together for technical and financial reasons. But as I wanted!

And today, the rapid and unbridled militarization of outer space does not begin at all on our initiative. We created our own videoconferencing system and do not touch anyone, but those who declare Russia a “threat to world security” bake aggressive plans like hot cakes. This year, for the first time in its history, NATO began to develop a “space strategy” for itself. This was announced by his Secretary General, Jens Stoltenberg. Moreover, the North Atlantic Alliance is preparing to proclaim space as “a separate territory for military operations” in the very near future. What for? Well, certainly not for peace purposes. True, the Alliance’s Secretary General, while ranting on this subject, admitted that without military satellites providing navigation, logistics and reconnaissance, NATO’s vaunted warriors will at once turn into a disoriented and completely incapable crowd, blind as newborn kittens. So they wouldn’t wake famously while it’s quiet! Russia is not going to attack anyone - neither on Earth, nor in space, but if it is necessary, its space forces will be able to prove that they did not lose the years past, while the West was only "swinging" to confront outside the planet.

Oh yes! I almost forgot. During the recent celebration in Ukraine of the 28th “fall-free day”, the “experts” from the Institute for the Future there predicted that in 28 years Kiev will certainly have its own space troops! This is a threat, so a threat. Perhaps it’s worth preparing ...

We are in Yandex Zen
It's important
9
Ukraine from the inside: traitors, curators and those who watch from the Kremlin
Ten "defeats" of Putin
Reporterin Yandex News
Read Reporterin Google News
5 comments
Information