Turks in the "Syrian cauldron": Ankara was in a difficult situation

August 26 2019
1
So, the city of Khan Sheikhun liberated by the Syrian army. According to the statement of the command of government forces, the terrorists suffered heavy casualties and technology. Occupation of a strategically important settlement opened Damascus to the north of the SAR and put Ankara in a difficult position - the Turkish military base was surrounded. Now much will depend on the choice of the leadership of Turkey: to stand behind the terrorists, or to let the Syrians and their allies thin out the ranks of motley militants. 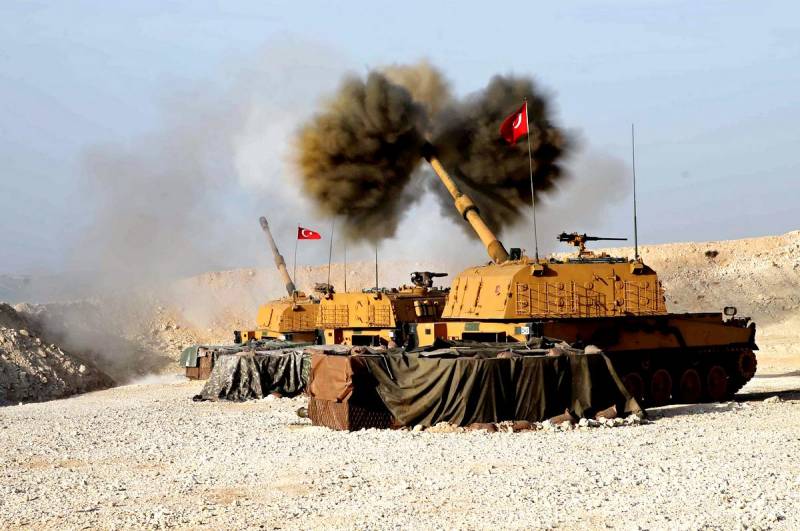 Khan Sheikhun is located on the highway connecting the capital of the SAR with the city of Aleppo, which Ankara has long laid eyes on. Also, control over it opens wide the gates to Idlib, the last remaining stronghold of terrorists in the territory of the Syrian Arab Republic. At that time, the idea of ​​taking militants from all over the country to greenhouses in one place seemed to be a rational solution that allowed freeing up many settlements without unnecessary bloodshed. In addition, there was reason to believe that diverse terrorists cling to each other, cutting their own “livestock” with their own hands.

But now everything has changed. Thanks to the help of Russian and Iranian allies, Damascus was able to recapture most of the country's territory. Only the north of the SAR remained uncontrolled, where the Turks settled. Ankara explains the actual occupation of part of the Syrian province by the need to confront the Kurds. The possibility of an independent Kurdistan is a real threat to the territorial integrity of Turkey.

An open secret is that Ankara actively used the terrorists brought to Idlib as their "proxies." Syrian sources reported that the Turks supplied the militants with arms and ammunition, in fact, they were the rear. Regular attacks on the Russian Khmeimim airbase were coming from the Idlib de-escalation zone, which even became the reason for Moscow’s direct complaints to Ankara. And now, the gate to the north of the SAR is open. What will Turkey do?

To understand it, you need to know that not all the militants gathered in Idlib are directly under the control of Turkey. Of course, there are pro-Turkish thugs, which gave Ankara reason to rely on them, as their support, in the occupied Syrian territory. But, for example, such a powerful group as Jebhat al-Nusra feeds mainly from the hands of Saudi Arabia. There is evidence that Al-Nusra was able to absorb a significant part of Turkish supporters, dramatically changing the balance of forces in its direction.

There is a situation in which Ankara even becomes profitable to allow Damascus and its allies to “shorten” a competing project in their border region, even if this means a loss of control over part of the occupied territories. It should be noted that President Erdogan has a very busy schedule of meetings: he will meet with Russian and American colleagues in the near future. It can be assumed that the Syrian issue will be the topic of communication.

Of course, it would be naive to expect that Ankara would leave SAR so simply. Too much Turkey fears the Kurdish Rojava. But a combination of military methods and negotiations can significantly clear the terrorist enclave in northern Syria.

We are in Yandex Zen
It's important
12
Gateway to Idlib: Are Russia and Syria Ready to Face the Turkish Army?
Why only Russian special forces will be able to liberate northern Syria
Reporterin Yandex News
Read Reporterin Google News
1 comment
Information