April 25 2018
10
In January 2018, President Vladimir Putin voiced the idea of ​​turning the Tu-160 strategic bomber, known as the White Swan, into a supersonic civilian passenger airliner. Russian scientists from the Central Aerohydrodynamic Institute and the Moscow Institute of Physics and Technology have begun work on the creation of a supersonic passenger airliner, which can be ready by 2030. 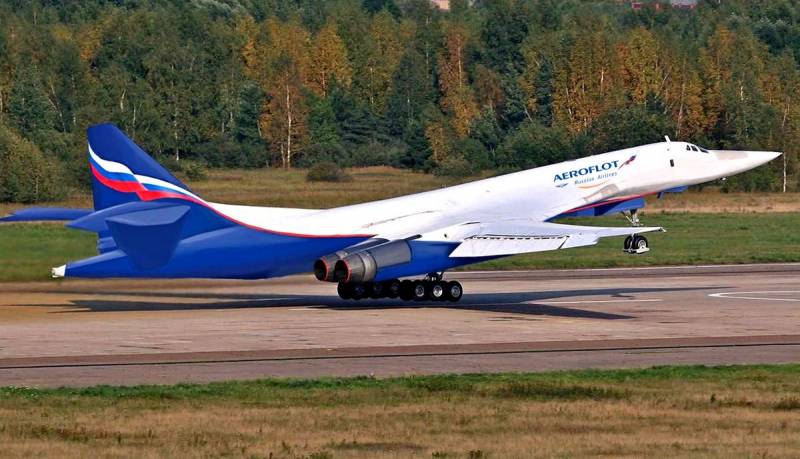 The history of aeronautics knows two technically successful supersonic airliners: the Soviet Tu-144 and the French Concord. However, at present, civilian aircraft do not fly at a speed exceeding sonic. What is the reason?

Problems for the development of supersonic aviation are both economicAnd technical character. Soviet Tu-144 is technically far ahead of its time. However, its commercial operation was very short, only 7 months. Although the cost of tickets was higher than on conventional subsonic flights, one and a half times, they did not cover high operating costs and huge fuel consumption. It was not possible for Soviet citizens to significantly increase the cost of a flight. As a result, Aeroflot was forced to abandon the commercial use of the Tu-144, an aircraft accident involving this airliner became a formal reason.

Most of the released supersonic Concordes made transatlantic flights, the ticket price when converted to today's rate could reach $ 10000 one way. Over 27 years of operation, the British-French Concorde transported more than 3 million passengers across the sky. However, the Concord project was also closed after the disaster.

Experts note that in reality the Tu-144 and Concord were closed due to their unprofitability. High fuel consumption did not make it possible to fly on long-haul routes, and saving time on flights on short-haul routes did not give increased passenger traffic at a high ticket price. The demand for supersonic flights these days can be high in the field of business and corporate aviation, where prestige is not important in cost. Representatives of Middle Eastern monarchies may also show interest in a supersonic airliner.

Also, serious technical problems will arise for developers when they try to turn the White Swan into a passenger plane. It will be necessary to expand the fuselage, which will increase weight and fuel consumption, as well as reduce the speed and altitude of the flight. It will take a new engine, new materials, new fuel. It will be necessary to consider how to reduce the level of noise impact during the transition to supersonic. In fact, we are talking about creating a new aircraft. If you have an engine, it may take 7-8 years.

And the last problem that the creators of the supersonic airliner will have to face is licensing it. Firstly, there are no modern regulations for the design and operation of supersonic passenger liners. "Concord" are outdated by almost half a century. Secondly, in reality they can only be developed by the US US Federal Aviation Administration (FAA). The United States at one time tried to create its own supersonic Supersonic Transport, but these works were not brought to the final. Therefore, the Americans headed for discrediting the very idea of ​​supersonic aviation, supporting Boeing with its subsonic wide-body aircraft. Even the British-French Concord, they at one time allowed only for operation on its Atlantic coast.

One can hardly expect mercy from American regulators in the matter of certification of a new Russian supersonic airliner. Therefore, the novelty in case of appearance will be realized only in the domestic market, which is estimated at 20-30 aircraft at a price of 100-120 million dollars apiece, or in friendly countries.

The Russian aviation can have a real future only when creating an alternative to the American and European rules, possibly in the format of the BRICS countries.
Ctrl Enter
Noticed oshЫbku Highlight text and press. Ctrl + Enter
We are
Russia is ahead again: TsAGI is developing a hypersonic passenger liner
Toy for the rich: what will the formidable Tu-160 turn into
Reporterin Yandex News
Read Reporterin Google News
10 comments
Information
Dear reader, to leave comments on the publication, you must sign in.