Shoal of Lena: what happens to Russian rivers?

August 25 2019
39
Something is clearly wrong with our country. The Volga, one of the largest rivers in Europe, has become shallow. Siberia burns so that it is necessary to extinguish with the help of the military. And now Lena, the most full-flowing river in Russia, has become catastrophically shallowed. What is going on and who is to blame - the “liberals", the Chinese, climate change, or all together? 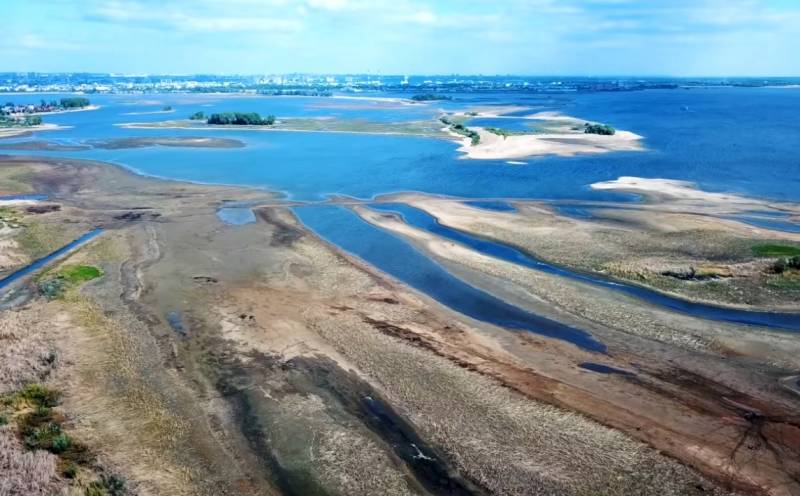 The Lena River - the largest in Russia, passes through Yakutia and the Irkutsk region. Its tributaries also originate in the Amur Region and Buryatia, Krasnoyarsk, Khabarovsk and Trans-Baikal Territories. This is the main waterway of Yakutia, connecting it with the "mainland". The main part of the "northern delivery" passes along the river. Lena is traditionally rich in fish resources, 37 species of fish live in it.

Rather, it was rich. Now all of the above is a big question. The representative of the company engaged in river transportation, Boris Stroyev, explains that the river is critically shallow:

Meteors cannot pass. Can't get a tanker, you know. A large fleet, it stands, cannot pass due to shallow water.

In the capital of the region, the city of Yakutsk, there the ships simply stand in silt and sand, and the water receded. And it’s okay for tankers, but even small vessels have problems, says boat owner Sergei Yarygin:

Those who still have more or less small boats can afford to lift them, and those who have bigger boats - it’s still difficult. We can’t lift the boat, and we can’t get out either, there the depth is less than 30 centimeters.

And this is about the recently most full-flowing Russian river! At the moment, as a transport artery - it de facto ceased to exist. Along with the water, the fish naturally disappeared, local fishermen complain:

The river began to grind, and the fish disappeared somewhere. How many do not come, I throw - there is no fish.

It all looks like a complete environmental and economic catastrophe. But how was this possible? How much is the “human factor” in the incident, and how much is the irresistible force of nature?

Specially trained people explain to the population that this is a matter of rapid climate change:

Yakutia is one of the most sensitive regions that respond to such changes.

According to environmentalists, in 2013, Lena also became shallow due to a strong anticyclone, which did not allow precipitation to reach her. In this case, there is a gradual degradation of permafrost, which leads to subsidence and the formation of karst lakes. Well, denying climate change and its impact on the environment would be foolish. But this is not the whole truth.

Unfortunately, the catastrophic shallowing of the Lena River clearly shows the work of human hands. It is easy to notice that the upper reaches of the East Siberian river are located precisely in those regions where terrible forest fires now rage annually. Like us previously told, fires are the result of illegal and barbaric deforestation. "Black lumberjacks" are tearing down the taiga, which radically violates the water balance. Rivers receive less water from swamps and small rivers. Smokes from forest fires not only prevent local residents from breathing, but also erode the clouds, preventing precipitation. Those few rains that pass, the picture does not change, because the water, not lingering, goes into the ground.

As a result, even the great Lena turned into a drying stream. Throwing everything on the climate is convenient, but dishonest. The inconvenient truth is that a criminal logging rampant in Siberia became possible only after the adoption in 2006 of a new Forest Code, which created all the conditions for the arrival of “effective owners”. But instead of them came the "locust", which is taking down hundreds of hectares of our forest under the root. Some 13 years were enough for an environmental disaster, not only in the taiga, but also on the once-most full-flowing Russian river Lena.

If a damn dozen years is not enough for the authorities to understand, let’s say again. Forests, rivers, swamps are a single large organism, where everything is interconnected. It is necessary to immediately amend the Forest Code of the Russian Federation and recreate a powerful federal forest conservation structure, with tens of thousands of foresters, as it was before, with the appropriate budget, powers and logistical equipment. Otherwise, it will only get worse.

We are in Yandex Zen
It's important
45
“With Russians it’s worth playing fair or not playing at all”
Where is Russia going?
Reporterin Yandex News
Read Reporterin Google News
39 comments
Information