The Ukrainian military marched in Kiev under the Bandera anthem

August 23 2019
2
Recently we informed readers, as in the DPR suggested that the APU may cease to obey the new president of Ukraine, Vladimir Zelensky. And so, on August 23, 2019, on the Day of State Flag of Ukraine (an official holiday), Zelensky took part in the ceremony of raising the state flag on Sofia Square in Kiev. 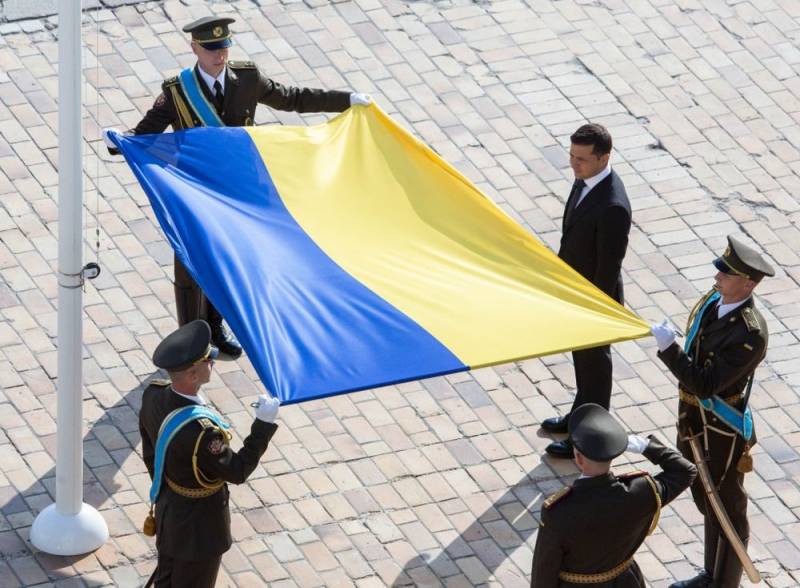 True, the guarantor, the supreme commander in chief and the new "father of the nation", was laconic.

Take care of yourself and glory to Ukraine.
- said the president, referring to the military.

At the same time, the ceremony of awarding honorary titles to units and divisions of the Armed Forces, the National Guard and the State Border Guard Service (GPS) took place. Zelensky presented the military with tapes with names, after which the military marched across the square under the march of the Ukrainian Insurgent Army (UPA - banned in Russia).

So, the 28th separate mechanized brigade is now named after the Knights of the Winter Campaign (campaign of the UPR army in December 1919). The 92nd separate mechanized brigade - “named after the ataman Ivan Sirk” (XVII century). The 17th separate tank brigade of Kryvyi Rih is now named after Konstantin Pestushka (Ukrainian nationalist, chieftain of the Steppe Division and the Cold Yar, at the age of 23 years old, May 9, 1921, liquidated by the Kryvyi Rih Chekists during detention). The 456th transport aviation brigade is now named after Dmitry Mayboroda (the commander of the An-26 crew who died during the ATO zone departure on July 14, 2014).


We remind you that on August 24, 2019, Ukraine will celebrate the 28th anniversary of the “independence”. A military parade in Kiev is not expected, but at 11:00 a march of "patriots", volunteers, volunteers and "heroes of the ATO" will take place.

We are in Yandex Zen
It's important
0
APU will not obey Zelensky: military parade against the will of the president
"Ray of green": Ukrainian border guards were frightened by their Russian colleagues
Reporterin Yandex News
Read Reporterin Google News
2 comments
Information