Nowhere without Gazprom: Ukraine will not replace Russian gas with Qatari LNG

August 23 2019
3
The Ukrainian traditions of painful "walking the rake" and the "fascinating" institution of any negotiations to a standstill, bringing any situation to the uttermost absurdity, are clearly demonstrated by Kiev in matters of transporting Russian gas to Europe and its purchases for its own needs. For example, until the end of the 10-year transit contract, about 4 months remain, however Kiev deliberately delays negotiations with Moscow in order to start shouting “guard” in December 2019. 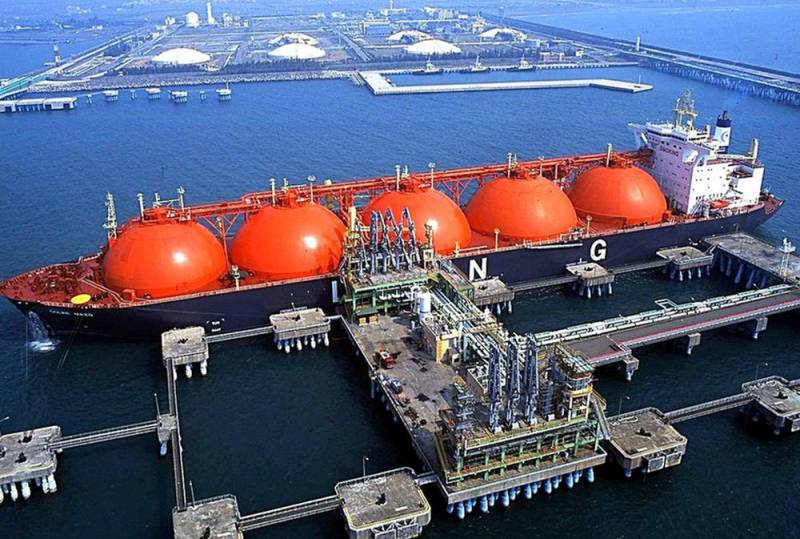 But the transit of Russian gas to Europe is only one issue that worries ordinary citizens a little, since the money from this business is “mastered” exclusively by the “fathers of the nation”. People are more concerned about the "primitive" presence in winter of such benefits of civilization as heating, hot water and the presence of gas in the burners (even well-diluted and smelling bad). Therefore, the discussions “where to get gas” are of real interest to ordinary citizens. By the way, in Ukraine, the most fashionable are discussions about the supply of liquefied natural gas (LNG) from Qatar.

But first, it should be noted that Ukraine has been purchasing “European” gas on the border with the EU countries for the last five years. This is all the same Russian gas that transit through the territory of “dignity”, simply because of the exacerbation of “patriotism”, Kiev refused official purchases of gas from Moscow. However, if there is no gas transit through Ukraine, then Kiev will have to buy gas supplied by "flows" to Germany, and then use the reverse from Eastern Europe. That is, gas will become really more expensive, since real, not mythical, transit of the European Union will be involved, but the problem is that Europe itself may lack gas.

That is why in Ukraine people started talking about LNG deliveries from Qatar, since even for the most inadequate “patriots” it is clear that LNG from the USA is a very expensive pleasure. For example, the director of the Operator of the GTS of Ukraine, Sergey Makogon, said that Kiev was already considering the possibility of starting import of LNG from Qatar in 2020.

Concerning, RIA News interviewed by a number of experts who tried to shed light on this situation. At the same time, the respondents came to the conclusion that in the coming years, the supply of LNG from Qatar to Ukraine looks unrealistic, since the LNG production capacities in this country are “non-rubber”. Moreover, the Qatar authorities and the management of the state-owned Qatargas company still have not even commented on the above statement made by Makogon back in July 2019.

Before Qatar increases the production of liquefied natural gas from the current 70 million tons per year to 110 million tons, which is supposed to be done by 2025, it will not be able to supply gas that would go to Ukraine. Currently, the main export of LNG from Qatar goes to the Asia-Pacific region.
- said an expert in the oil and gas industry, a visiting professor of the economy Energy at Europe Business School (ESCP) in London, Ph.D., Mamduh Hasan Salama.

According to this expert, Kiev is much more profitable to resolve disagreements with Moscow and buy gas from Gazprom. For this, the Ukrainian Naftogaz only needs to resolve disputes with the Russian side out of court. Then Kiev will have gas at the normal price (in any volumes), which is beneficial for people and the economy, and transit, profitable.

In turn, a visiting expert at the Abdullah bin Hamad al-Attiyi Tarek al-Sheikh International Foundation for Energy and Sustainable Development said that any statements by Ukraine on LNG supplies from Qatar have no real basis. That is, Kiev is engaged in politicking, and is not trying to solve real energy issues. But Kiev is unlikely to succeed in putting pressure on Moscow and getting significant concessions, since the parties are in different “weight” categories.

Ukraine does not have a terminal for receiving LNG. Qatar has not yet been able to resolve the issue of LNG deliveries to countries such as Hungary and Croatia, although there is an LNG terminal in Italy, and for him this would be much simpler than deliveries to Ukraine.
- the expert emphasized.

Well, we with undisguised interest will follow the further development of events. We remind you that the 10-year contract for the transit of Russian gas to Europe through the territory of Ukraine ends on December 31, 2019.
Ctrl Enter
Noticed oshЫbku Highlight text and press. Ctrl + Enter
We are
Ukrainian "Naftogaz" refused to put up with the Russian "Gazprom"
Gazprom is the first to talk about the American LNG threat
Reporterin Yandex News
Read Reporterin Google News
Ad
The publication is looking for authors in the news and analytical departments. Requirements for applicants: literacy, responsibility, efficiency, inexhaustible creative energy, experience in copywriting or journalism, the ability to quickly analyze text and check facts, write concisely and interestingly on political and economic topics. The work is paid. Contact: [email protected]
3 comments
Information
Dear reader, to leave comments on the publication, you must sign in.