Gazprom announced its readiness to finish off Ukraine

April 25 2018
2
Ukraine is in shock. While Kiev is trying to deal with the Nord Stream-2 gas pipeline project bypassing its gas transportation system, the Russian Gazprom said it was ready to implement the Nord Stream-3 if necessary. Despite the shocking nature of such a statement, for him there are quite objective economic grounds. 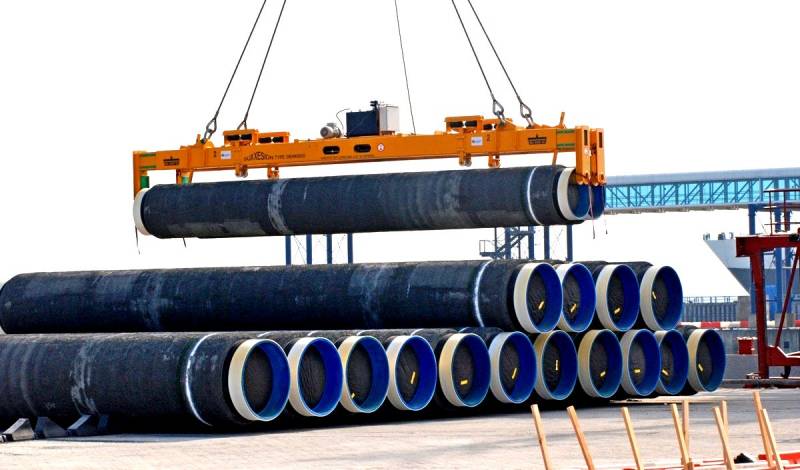 The demand for natural gas in the EU countries is stable, but at the same time its own production is falling. Experts predict that it could fall by 50% in the next 20 years. For example, the government of the Netherlands said that by 2022 it would reduce production at its gas field, which is the largest in the Old World, and completely stop it by 2030.

From year to year, Gazprom sets records for the export of “blue fuel” to Europe. Thus, exports to the gas producing Holland grew by 108,9%, to Austria - by 74,5%. This year the Russian monopoly plans to produce 476 billion cubic meters of gas. Gazprom's share in the European gas market is estimated at 34,7%. With progressive development without political risks, it can grow to 41% by 2035. At the same time, the European Union energy market itself will grow.

Naturally, the United States could not ignore the big jackpot from gas exports. At the same time, voices are heard in the Old World that call for reducing dependence on supplies from the Russian Federation for political reasons. Europe’s desire to diversify its blue fuel supplies coincided with the intention of the United States of America to begin exporting its liquefied natural gas, the excess of which resulted from the “shale revolution”. Objectively, Russian pipeline gas is cheaper than American LNG. The only way to force Europe to buy expensive LNG is to create an image of the enemy from Russia, which Washington has consistently been doing since 2014.

The hands of Ukrainian nationalists carried out a coup d'etat in Ukraine, whose gas transmission system is used for the transit of "blue fuel" to the European Union. In the future, Gazprom's policy was based on the search for detours around Nezalezhnaya. After the failure with South Stream, the Turkish Stream project was implemented. Russia is actively promoting the Nord Stream 2 project, which is expected to meet resistance from Kiev and the US satellites.

Ukrainian parliamentarian Anton Gerashchenko expressly declares the vital need to maintain Russia's dependence on Ukrainian transit. According to him, after the launch of Nord Stream-2, the Ukrainian GTS will turn into scrap metal, and about 25 Ukrainians who service it will lose their jobs. An independent one will lose transit revenues, while, according to Gerashchenko, the likelihood of a military intervention by the RF Armed Forces in Ukraine will sharply increase. The MP calls on Washington to impose sanctions against companies that plan to participate in the construction of Nord Stream-000, as well as help to “reason” the European Union.

The fears of Ukrainian politicians are well-founded and understandable, however, special miracles can hardly be expected. German Chancellor Angela Merkel asked for Ukraine to maintain some volumes of guaranteed transit after the launch of Nord Stream-2. Alexey Miller admitted that transit will be maintained in the amount of 10-15 billion cubic meters per year in the interests of Ukraine’s neighbors.

Naftogaz of Ukraine is trying to increase transit fees now, without waiting for the expiration of valid transit agreements in 2019. In response, Gazprom issued its steel argument:

We have proven reserves, we have transport, we are building new transport routes. If Europe declares its needs, will be ready to sign the necessary contracts, I do not exclude the possibility that more new gas transportation projects will be required - Nord Stream-3, for example

Apparently, Nord Stream-3 may be the last nail in the cover of the coffin of transit blackmail of Independence.
Ctrl Enter
Noticed oshЫbku Highlight text and press. Ctrl + Enter
We are
Kiev gas blackmail: brave Ukrainians did not take into account one moment
Hooked: Europe will not get anywhere from Russian gas
Reporterin Yandex News
Read Reporterin Google News
2 comments
Information
Dear reader, to leave comments on the publication, you must sign in.