“The Russians have what we don’t have”: the world is covered by “hypersonic panic”

August 22 2019
8
The tragic accident near Severodvinsk, among other things, launched another round of real panic in the West related to the development of the latest types of weapons by our country. Indeed, it’s fun to hear and read how those who until recently considered the possibility of a universal nuclear Apocalypse as almost a stupid “horror story” suddenly began to discuss with extreme seriousness and concern what would happen to them if things nevertheless came to pass before the world military conflict with the use of the most destructive weapons. 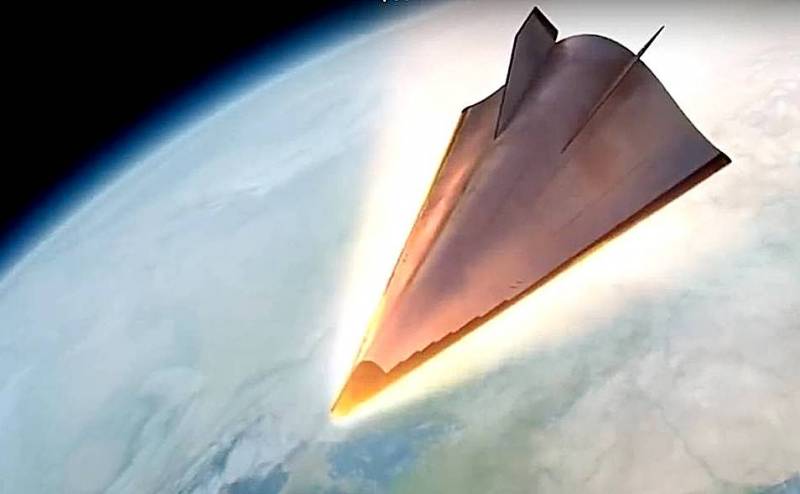 And, we must pay tribute, for the first time in a long time, even in the United States the voices of those who openly admit were heard - the blame for the current situation, which is getting closer to a critical point, does not lie with Russia ...

They can do it!

In principle, the fact that the emergency incident at the Russian military training ground caused just such a reaction is not surprising. It is one thing to try to invent new Russian weapons, exposing them as “cartoons from Putin” and “the bluff of the Kremlin”, and it’s quite another to run into real evidence of the development of this very “bluff”, even if it became public domain because of the disaster. “It exploded ?! But these are Russians - they won’t stop, they will finish their venture to the end - not earlier, but later! ” - It is in this vein that people today argue in the West and, which is characteristic, they are not mistaken at all. Not so long ago, the British Air Force, having gathered in the studio the most venerable experts, both domestic and invited from the United States, organized almost an entire scientific conference on this subject. It turned out, I must say, quite funny and instructive enough for the local audience. At first, the conversation revolved solely around the question: “So what did it still explode there?” Mr. Enkit Panda, who represented the Federation of American Scientists at the event, expressed the opinion that it was “something of the notorious Petrel,” and suggested that he rely on Donald Trump, who is sticking to this particular version, who must have “intelligence data”.

True, the picture was pretty much spoiled by his compatriot, Michael Kofman, from the CNA's naval analysis center, who blurted out something like:

What do you grab onto one rocket? Yes, these Russians now, there is no doubt that they are developing a lot of things! Including - and with nuclear engines ...

The audience from this remark was clearly ill at ease, and they immediately began to convince each other that it was "too early" to talk about taking new missiles into service. The representative of Britain, Mathieu Boulegue, showed particular agility here, however, he was never a military or scientific expert, but an employee of the Royal Institute of International Relations Chatham House. In his opinion, the rocket is "at an early stage of development" and "may not be accepted into service until 2030." Yeah ... Maybe it can be! How do you like that? The most hilarious part of the “discussion” was the enumeration of “similar military developments that the USA had” - like the Poseidon project. They mentioned a lot of them, but only with a substantial amendment - the Americans didn’t get a damn thing out of their attempts. Unlike us. As a result, the meeting participants came to an extremely disappointing conclusion: the creation by Russia of rockets with a nuclear engine of the Petrel type will definitely give it the opportunity to “hit even the most distant targets, and practically without any risk”.

The authors, drawn up by the European Leadership Network (ELN) report on the prospects for the development of hypersonic weapons, came to about the same, that is, extremely disappointing for the West. Missiles created using this Technology, the document called "a serious threat to the security of the whole world." Still - because they, by virtue of superiority over other existing missiles in maneuverability and speed, "will be invulnerable to modern missile defense and air defense systems, at least in the foreseeable future." Also, according to one of the authors of the report, Katarzyna Kubiak, this weapon will further strengthen the negative role of the “human factor” in the possibility of unleashing a general nuclear conflict. Knowing that a potential adversary has weapons, it is simply impossible to stop or repel a blow, representatives of a country may try to “be ahead of the curve” in any critical situation, deciding to strike first. According to ELN experts, the only way out of the current situation, which poses a mortal danger to all of humanity, can be the creation of a “new system of international treaties” that will serve to deter military “hypersound” and control over it. The intentions are beautiful, no doubt - but who will bring them to life? There would be existing contracts to save ...

We are to blame ourselves!

A new unprecedented round of the arms race, or, as the ELN report beautifully says, “gaining more and more visible traits by a ghost of nuclear war,” again aroused interest in the West in various kinds of “post-apocalyptic” scenarios and studies on the topic “What happens if will Big Babah happen? ” So, scientists from the US National Center for Atmospheric Research, Colorado and Rutgers Universities have created a new model depicting the effects of a nuclear war between the United States and Russia. It turned out terribly to trembling. The emission into the Earth’s atmosphere of one and a half hundred million tons of radioactive soot, the collapse of monsoons and the displacement of polar vortices ... And also - another thousand and one similar “charm”. In general, the latest research has confirmed the findings of the same research carried out earlier - as, for example, by the Goddard Space Research Institute at NASA, and other scientific organizations and teams in the 80s of the last century. In the case of the beginning of global nuclear "showdowns", mankind inevitably expects the arrival of the fox. Yes, the same polar one ... In the sense that the onset of a “nuclear winter”, with all its terrifying consequences, will be inevitable. Scientists summarized the message about the simulation with the unambiguous conclusion: “Disarm everyone immediately!” Their mouth ...

It is hard to believe, but, as I said at the very beginning, some in the West begin to prevail a more or less sensible point of view on everything that is happening, and most importantly, on the reasons and perpetrators of the fact that the world today again hangs over a nuclear precipice. True, this happens so far infrequently and with serious reservations. So, The Economist magazine published a lengthy article that acknowledges a fairly obvious fact: the presence in the US military doctrine of a clause on the possibility of "preventive" use of nuclear weapons, including against opponents with exclusively conventional weapons, lasting peace on the planet, to put it mildly, not conducive. As well as the almost unlimited powers of the head of the White House to give the order to deliver an atomic strike. For some reason, this terribly annoys the neighbors of the United States on the planet and forces them to develop even more deadly weapons ... What is most interesting, those who share this opinion were found even among candidates for the presidency. Rather, the applicants. Aspiring to head the American nation, Elizabeth Warren, announced the need to pass a law on the country's refusal of the first nuclear strike. And her potential rival in the election race, Marianne Williamson, is completely convinced of the need to create a Department of Peace in the US government structure, whose head should be a member of the country's Security Council.

Let us return, however, to publication in The Economist. Contrary to all the reasonable ideas mentioned above, as a result, its authors come to rather unexpected conclusions - in the style of “started for health, finished for peace”. For some reason, they believe that Washington’s prudent move, such as abandoning the cowboy’s “First Beat!”, Will lead some American allies in Asia and Europe, “hoping to contain the United States, Russia and China,” to begin to “build their own arsenals ", which, in turn," will increase instability and military danger in the world. " Well, yes - and it is desirable to extinguish the fire with gasoline ... The position voiced not so long ago on one of the TV shows popular in the USA, professor of New York and Princeton universities, Stephen Cohen, who is considered a great specialist in the homeland, looks much more realistic, frank and appropriate. Of Russia. ” He stated with disarming straightforwardness: it was the United States that created the preconditions for the ongoing crisis now for many years. They provoked by their irresponsible actions a new round of the nuclear arms race. The professor believes the main culprit is the US President, George W. Bush, who in 2002 unilaterally severed the ABM Treaty. According to Cohen, it was then that "the Russians decided that the Americans want to be able to deliver the first nuclear strike without receiving an answer." And they began to develop their current superweapon! What did Washington achieve in the end?

Today, Russians have what we don’t have!
- summarizes the scientist.

It's hard to argue with his words. Yes, and why? After all, Cohen was right around, as he was, by the way, claiming that with his next aggressive actions Washington “plays into the hands of those representatives of the political establishment of Russia who urge Putin not to be naive and not to believe US promises.” And how can one be trusted - after the INF Treaty’s rupture and talk of intentions to ditch START-3 in exactly the same way !? In this situation, only what the West today calls the “Russian deterrence through intimidation tactics” can work. What else do you want to do with those who simply don’t understand in a good way? You know, after a nuclear winter, there might no longer be a professor who would explain to the president what was left of the United States and all the fallacy of treachery towards Russia.

We are in Yandex Zen
It's important
12
Ukraine from the inside: traitors, curators and those who watch from the Kremlin
Ten "defeats" of Putin
Reporterin Yandex News
Read Reporterin Google News
8 comments
Information