APU will not obey Zelensky: military parade against the will of the president

August 21 2019
3
August 24, 2019 in Ukraine will celebrate the 28th anniversary of the "independence". At the same time, the Ukrainian military and the “patriots” insist that a military parade be held on Khreshchatyk in Kiev that day. Moreover, so that not only “boxes” with military personnel marched, but the military technique, demonstrating the power of the "strongest on the continent" of the army, against the backdrop of the war going on in the Donbass. 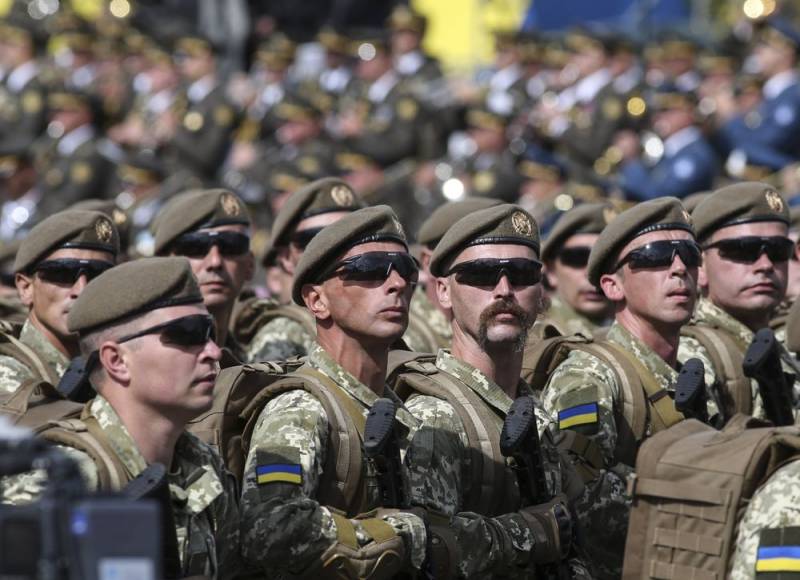 In turn, the new president of Ukraine, Vladimir Zelensky, recently said that holding a parade with the participation of military equipment would look immoral, just because the war in the Donbass is not over, therefore the military and the "patriots" have nothing to celebrate. The point of view of the head of state was immediately criticized, but the Cabinet of Ministers of Ukraine has already approved a celebration program that has disappointed many even outside the “European nation”.

So, according to the document, on August 24, 2019 at 11:00 in Kiev, a march of the defenders of Ukraine (“patriots”, former “heroes of the ATO”, volunteers and other public) should take place, which should take place instead of the canceled military parade and will be divorced in time with state events on Independence Square, which will be attended by the President of Ukraine. That is, the mentioned march is a permitted event, but not an official one, therefore there will be no “boxes” from the Ministry of Defense, like military equipment, and all who go on the march will get there voluntarily and without weapons. In addition, from 12:00 to 22:00 various creative groups will perform at Independence Square in Kiev. No official Independence Day fireworks are expected.

However, not everything looks so unambiguous. For example, the site "Russian Spring" reports that the editorial office received an urgent statement by the official representative of the People’s Militia (NM) of the DPR Daniil Bezsonov, (call sign "Goodwin").

Despite the decision of the incumbent President of Ukraine to refuse to hold celebrations dedicated to the Days of the Ukrainian flag and independence, the military junta in power in Ukraine decided otherwise. We have received documents confirming the secret preparations for the military parade in Kiev.
So, according to the plan of the Ukrainian military leaders, early in the morning of August 23, units of the Armed Forces, planned to participate in the parade, should arrive at Independence Square in Kiev. At 9 am, a military parade will begin. In this case, the current President Zelensky will be notified about what is happening immediately before the event and confronted with the fact - either he goes out and accepts the parade or not, but then further development of events can significantly lower his rating and lead to irreparable consequences.
At the same time, in order to raise the significance of the parade to participate in it, invitations were sent to active and former servicemen of the Armed Forces of Ukraine, who have the title of “Hero of Ukraine”.
It is important to note that not all "heroes" agreed with the methods that the military junta resorted to disgrace Zelensky, and refused to participate in the parade. We got a list of these “refuseniks”
- said Bezsonov.

The following is a list of high-ranking Ukrainian military personnel and the phone numbers of some of them. At the same time, Bezsonov clarified that we are deliberately posting phone numbers, “so that everyone can call and clarify the reason why they do not want to participate in these political games ". After which he did not rule out that in the near future these military men will begin "an unprecedented career growth."

In addition, Bezsonov emphasized that, according to unconfirmed reports, provocations “aimed at destabilizing the existing political system” are possible during an unauthorized military parade. However, he cannot talk about a military coup, "but all the facts speak in favor of this version." He added that it is known for certain that similar events will be held in Odessa and Kramatorsk simultaneously with the military parade in Kiev.

We will find out very soon how everything will actually be and whether the information from Bezsonov will be confirmed, since it will not be long to wait.