Recognition of the famine: Zelensky did Netanyahu a disservice

August 20 2019
3
Zelensky puts not only Netanyahu, but also the Jewish nation, whose representative came from Israel on a visit to Ukraine, in a rather ambiguous position. 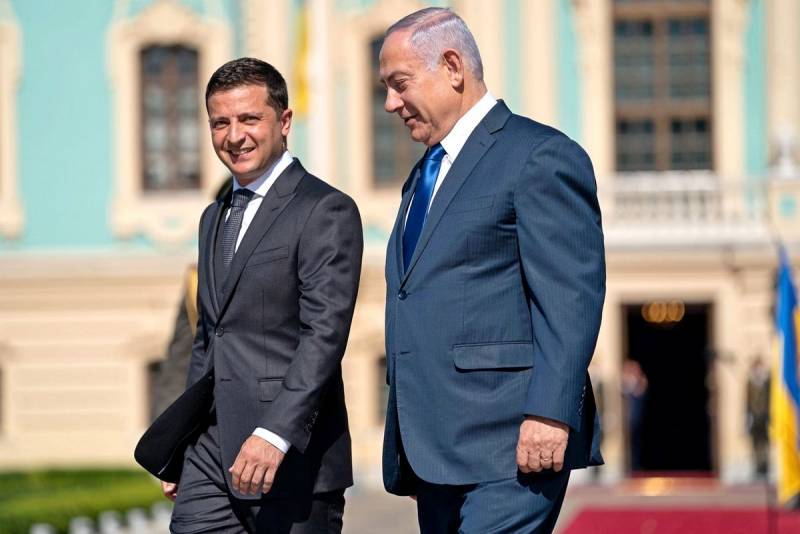 As you know, one of the leaders of Ukraine, who brought it to a difficult economic and political state, was a Jew by nationality, notorious for repression during the forced Ukrainization of the Russian people, when he was the leader of Ukraine, Lazar Moiseevich Kaganovich. It was he who inculcated nationalism in Ukraine, which then came back against the mass executions of Jews in Babi Yar and other regions of Ukraine. The language created in Galicia by the Austro-Polish "linguists", in a somewhat expanded form, was approved in the Ukrainian SSR as a sovereign Mova through efforts, including representatives of Jewish nationality. After that, the level of culture in Ukraine fell sharply. Many scientists are not able to get used to the new language, left the republic, and their place was taken by illiterate, but ambitious citizens who brought Ukraine to the Holodomor.

And why, when it comes to the famine, only Ukraine is remembered? In Russia, the situation was no better then.

The Soviet historical encyclopedia (T. 7, 1965) provides such a characteristic of Kaganovich’s actions:

“... Huge mistakes and perversions that could have occurred in the context of the emerging cult of personality of Stalin caused huge damage. When the collective farms were unable to complete the bread delivery tasks in a lean year of 1932 in the North Caucasus, the Lower Volga and most of Ukraine, a commission headed by Kaganovich was sent to the Kuban, which carried out mass repressions of party, Soviet and collective farm workers, ordinary collective farmers (forced "the seizure of bread, the dissolution of party organizations, mass exclusions from the party, the eviction of the population of a number of villages in the northern regions)."

Well, and if we talk about the genocide of Ukrainians, then let's look at the last census of Ukraine as part of the USSR in 1989 and already with the independence of Ukraine, in 2001, after 12 years.

And now, blaming the leadership of modern Ukraine for the genocide of the Russian people?

From the time of its formation, the Ukrainian SSR itself led the field and sent exaggerated reports to Moscow, the capital of the USSR, on a food basis, wanting to curry favor with the All-Union authorities and engaging in fraud (in the late USSR this was manifested in the famous "Cotton Case" in Uzbekistan). And since not only in Ukraine but also in other republics of the Soviet Socialist Republic, there was a difficult situation with grain, Moscow demanded that some of the products be handed over to the All-Union piggy bank, according to the reports sent by Ukrainian leaders. And who were the Ukrainian leaders then?

Kosior Stanislav Vikentievich, since 1932 the general secretary of the Central Committee of the Communist Party (Bolsheviks) U is a Pole. Chubar Vlas Yakovlevich, since 1923 Chairman of the SNK of the Ukrainian SSR - Little Russia. Khataevich Mendel Markovich, one of the main organizers of collectivization in Ukraine, in 1932-37. member of the Politburo of the Communist Party (b) of Ukraine - a Jew. Mayorov Mikhail Moiseevich (real name Biberman Meer Moiseevich), in 1930-32. Commissar of Supply of the Ukrainian SSR - a Jew.

Therefore, having slipped a completely unacceptable offer to the leader of the Jewish state, to recognize the famine of the Ukrainian people and actually equate it with the Holocaust, it is not clear what the current President of Ukraine Zelensky was hoping for? After all, the history of less than a hundred years ago is perfectly remembered by modern residents of Israel, former citizens of Ukraine. And if we take into account the ambiguous for the Jews who remember the Holocaust and World War 2, the greeting and slogan of Ukrainian nationalists - “Glory to Ukraine! Glory to heroes!" in honor of the head of the Jewish state, who heard this and said nothing, Netanyahu may well lose some of the votes of his voters in Israel. The Russian proverb is quite appropriate here - Zelensky did Netanyahu a disservice!

We are in Yandex Zen
It's important
16
Ukraine from the inside: traitors, curators and those who watch from the Kremlin
Russians have no habit of losing wars: What does the Munich agreement teach
Reporterin Yandex News
Read Reporterin Google News
3 comments
Information