August 18 2019
13
The terrible forest fires raging in Siberia, again raised the question of the danger of the activities of "black loggers". Domestic officials thought carefully and found those responsible for illegal logging and subsequent fires in China, threatening to completely ban the export of wood to China. Is there a problem in the Chinese alone, and why do not the responsible people notice the logs in their eyes? 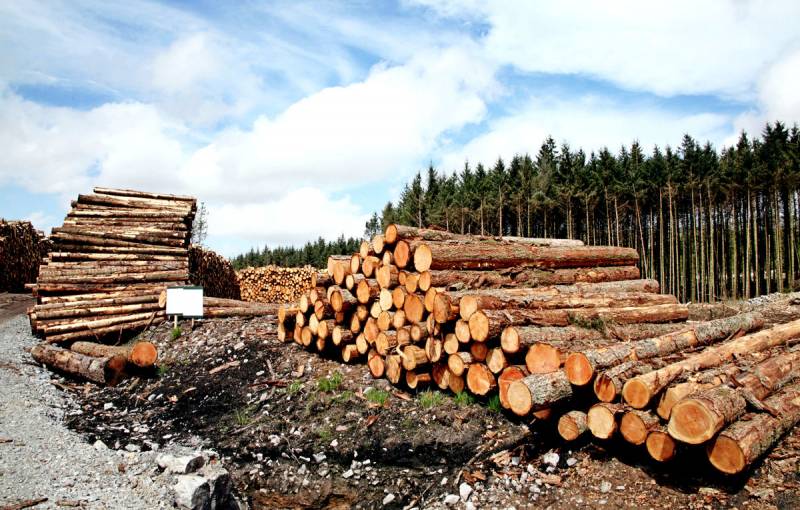 First of all, it is necessary to clarify that logging is a completely normal business, which can bring billions of dollars to the budget annually. The only question is how this business is conducted - civilized or barbaric.

China is the largest buyer of Russian wood. Beijing wisely banned the deforestation of its own forests, leaving it to the "developing" of Russia and Brazil. Chinese businessmen prefer to purchase raw materials with a minimum degree of processing, doing it on their own. What is the origin of the “round log" that falls on their enterprises, they do not particularly care. But is it possible to blame them in this?

The head of the Ministry of Natural Resources, Dmitry Kobylkin, complained about the "Chinese lumberjacks":

I really do not like that we are working alone with their “comrades” here in Russia. They come, buy wood, and we rake the rubble.

At the same time, the official suggested - as an alternative - cooperation with Chinese law enforcement agencies to protect Russian forests. With all due respect to the head of the Ministry of Natural Resources, it is difficult to comment on his idea without a strong word.

At first, it’s not the Chinese who illegally cut the forest, but our compatriots with you for the needs of the Chinese. This is directly stated by the State Duma deputy, Vladimir Burmatov:

It is not the Chinese who cut down our forest; our Russian criminals, who act in close conjunction with some Russian law enforcement officers and officials, cut it down.

Secondly, the conditions for this criminal expanse were created by the Russian authorities themselves, adopting in 2006 the new Forest Code, which destroyed the existing forest protection system. Tens of thousands of foresters were dismissed, the powers to protect the forest fund were transferred to the regions without proper funding. To top it off, the Ministry of Natural Resources in general allowed the governors not to extinguish some categories of forest fires, about which we detail told earlier.

Thirdly, instead of restoring the previous forest protection system, the head of the Ministry of Natural Resources offers cooperation with Chinese law enforcement agencies. What are we talking about? Does he really offer to take control of the Siberian forests to Chinese sheriffs and rangers? If not this, then what does he mean at all?

The cessation of criminal felling and endless forest fires annually destroying millions of hectares, together with the fauna inhabiting them, is possible only with the creation of a powerful federal structure with sufficient funding, material andtechnical base and authority. From China, one can take only their experience of executing corrupt officials.

In itself, the ban on forest exports to China is destructive. Russia will simply lose its market share. It is clear that the Chinese earn on processing, they have the appropriate competencies. The most rational would be the opening of joint ventures with modern processing technologies in the border Russian regions. True, this requires a consistent industrial policy, investments in infrastructure and equipment. And this, as they say, is a completely different story.

We are in Yandex Zen
It's important
28
China steals Russian forest: how to prevent this?
Who turned Russia into a forest
Reporterin Yandex News
Read Reporterin Google News
13 comments
Information