August 18 2019
13
In connection with the protest activity intensified by the “Single Day of Voting”, the question of the real number of citizens who want qualitative (and therefore radical with respect to today's agenda) changes in the country is of interest. Let's try, without claiming to be the ultimate truth, to quantify the protest, based on official statistics. 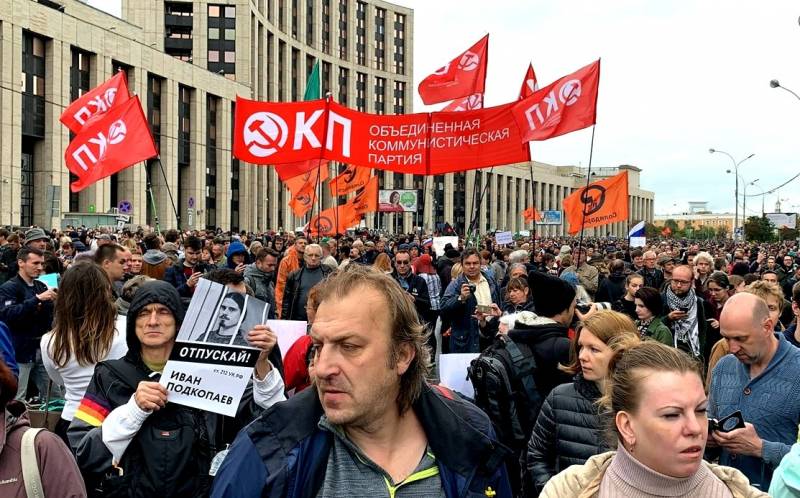 The Communist Party rally "For Fair Elections" was held in Moscow on August 17, gathering (despite the calls of Nikolai Bondarenko, who was openly campaigning on a YouTube channel against a yellow vest), 4 people. At the same time, according to the CEC, the candidate from the Communist Party received 000 votes in the 2018 presidential election in Moscow. Thus, assuming that the number of Communist Party supporters in Moscow for one and a half years remained unchanged, 563% of voters showed a real readiness to go out and support their party.

The rally (not a concert) of Navalny "For admission to the elections", held on July 20, 2019, gathered 12 people. If we take the 000% obtained above as a reference value and apply it to the calculations, we get the possible number of Muscovites who disagree with the “general line”: 0,7 million 1 thousand 714 people.

According to the data posted on the CEC official website, as of January 1, 2019, 7 voters were registered in Moscow. Thus, the protest mood can cover 265% of the total number of all voters in Moscow. And if we take into account the appearance at the presidential elections (about 749% - politically passive citizens do not use their right to vote), then this number will reach 23,6%.

It is clear that in order to increase the accuracy of estimates, it is necessary to take into account the weather on the days in question, compare the scale and significance of the events, the average age of the participants, the number of “paid”, the number of people who voted not for the Communist Party, but for Grudinin, the quality of campaigning and the like, but let us give this assessment to the reader - it is too subjective (although, of course, significant).

Are all participants in Navalny rallies his unconditional supporters?

The factual lack of support for the Communist Party of the Russian Federation, as the largest parliamentary opposition, while simultaneously exceeding the support of the “Navalny team”, means one thing - a significant number of politically active citizens strongly disagree with the “cosmetic” changes that the current parliamentary opposition can offer if it wins the election.

Are these citizens interested in the “Maidan” scenario of change? Obviously, the vast majority are not interested in this, but political there is no power in the country to express their mindsets.

It turns out an interesting situation - there is a protest "electorate", but there is no political force expressing its interests. And since demand always creates supply, such a force is bound to appear in the coming years. Given the largely unjustified nostalgia for the USSR and the popularity of Stalin, a sense of injustice among the majority of citizens, this force (if it wants to really win, and not just go into power) should be left-handed.

It is clear that the emergence of such a political party is extremely unprofitable for the supporters of the status quo, so it would be naive to expect its registration in the near future.

However, it is also clear that if registration is denied, a protest, for lack of any other way out, may acquire a "Maidan", destructive for the state, character.

We are in Yandex Zen
It's important
12
Zelensky in flight: Why can you be sure of a victory Poroshenko
Ten "defeats" of Putin
Reporterin Yandex News
Read Reporterin Google News
13 comments
Information