August 17 2019
1
Recently we Reportedhow the Airbus A321 airliner of the Russian airline Ural Airlines, flying from the Zhukovsky airport by flight U6178 Moscow-Simferopol, made an emergency landing in the Moscow Region. Moreover, Ukrainian "patriots" immediately have made heroic crew of the aircraft to the list of enemies of Ukraine. And so, on the Web there was a transcript of negotiations between the dispatcher and the A321 pilots, who sat on a corn field. 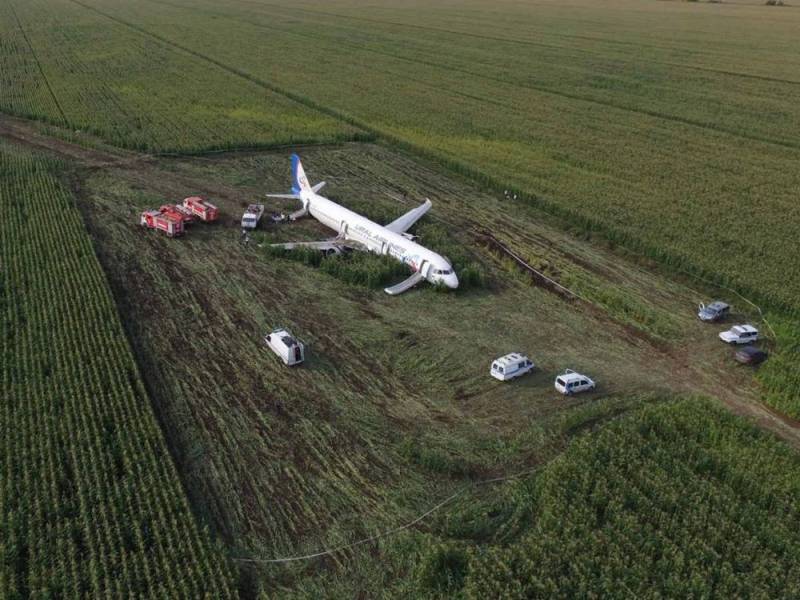 From the decryption it follows that two minutes after take-off, one of the engines failed in the liner, and the second engine began to lose power. After which, the pilots gave an emergency signal and reported what had happened. At the same time, the dispatchers before the departure of the board warned the crew about “individual bird flights” in the runway area, since they can interfere with the flight.

It should be noted that the liner collided with a whole flock of seagulls and the birds fell into both engines. It’s just that one of the engines failed immediately, and the other got fewer birds, and it gradually began to lose power. Pilots quickly orientated themselves in the situation, they did not begin to deploy the plane and try to return to the runway, but decided to land "on the belly", right on the corn field. However, the pilots had no choice, since the options for landing in a residential village or a highway filled with cars were fraught with sad consequences.

So, the events developed as follows. The liner took off at 06:12 Moscow time. After reporting the emergency, the dispatcher gave permission to return to the airport. However, the pilots did not deploy the airliner due to the marked drop in power in the second engine, from which the speed of the aircraft began to fall. Therefore, they chose the nearest relatively flat landing area, removed the chassis and turned off the second engine still running. In short, they did everything to save themselves, the crew and 226 passengers.

Already at 06:15 Moscow time, the pilots requested an ambulance and rescue service.

We made a landing, sat behind a strip. Passengers 226 and seven crew members.
- one of the pilots answered the dispatcher, answering a question about the height at which the liner is at that moment.

In a conversation with the dispatcher, the pilot also asked not to distract him, as passengers are already being evacuated.

By the way, the landing was tight. As a result, the 23-year-old co-pilot, George Murzin, was hospitalized with chest injuries. Russian President Vladimir Putin has already awarded the crew commander and co-pilot the title of Hero of Russia, and the remaining crew members will be awarded the Order of Courage. Moreover, the aircraft is no longer subject to further exploitation.

In addition, another interesting detail was revealed. 2 km. from the Zhukovsky airport there is an unauthorized dump, which was chosen by birds. Rospotrebnadzor even formed together with the authorities of the Moscow region a commission to check. Also checked was the Flight Research Institute. M. M. Gromova in Zhukovsky. He is the owner of the airfield and is responsible, inter alia, for protecting the airport from birds.

We are in Yandex Zen
It's important
5
The crew who landed a plane near Moscow, was included in the list of enemies of Ukraine
Russian passenger airliner boarded a corn field in Moscow suburbs
Reporterin Yandex News
Read Reporterin Google News
1 comment
Information