August 17 2019
3
Before Donald Trump's upcoming official visit to Denmark, the well-known publication The Wall Street Journal, citing its own sources, reported that the American president was considering buying the largest island in the world, Greenland, from the Kingdom. What is this, trolling Trump from his side political opponents, or can the United States really grow into a new state? 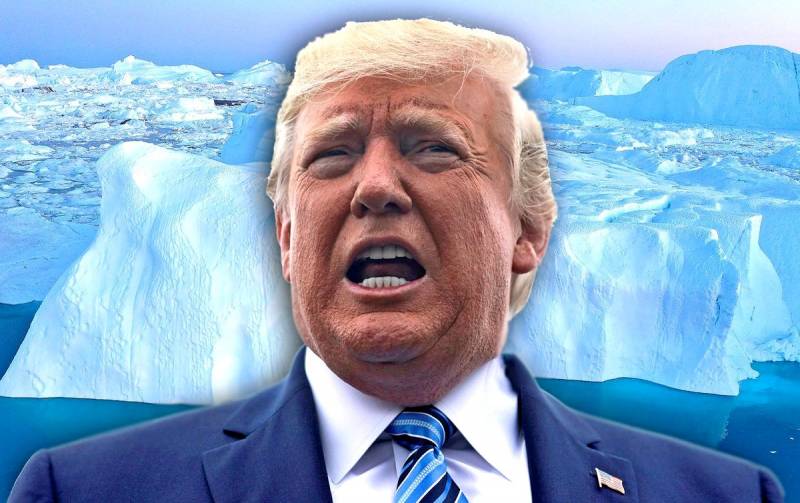 The message itself, for all its unusualness, does not look like a “dummy”. The United States of America has grown to its present size not only with wars of conquest, but also with a completely peaceful purchase of territories. It is enough to recall that they did not rob Alaska from Russia, and the Romanovs themselves got it off hand at a reasonable price. They had enough of these "Kemsky volosts".

In fact, this question is being raised in the United States for the third time. For the first time, the idea of ​​buying Greenland came up in 1867, and again - in 1946, immediately after the end of World War II. According to The Wall Street Journal, Trump is interested in the island's natural resources, however, the military component may even prevail.

Experts estimate the Greenland oil fields at 50 billion barrels, but they are classified as hard to recover largely due to adverse climatic conditions. True, the ice is beginning to melt faster. In addition, Greenland is favorably located at the junction of the Atlantic and Arctic Oceans. Owning an island entitles Copenhagen to claim to be a major player in the upcoming section of the Arctic Pie. If the island changes ownership, then the United States, which has Alaska, is squeezing the Arctic.

At firstSince the Cold War, the Pentagon has retained a large US Air Force base on the island. Currently, the processes of restoration by the Americans of the former military infrastructure in the Arctic region have intensified, as we told earlier.

Secondly, in the late nineties it became known that in Greenland, from 1958 to 1966, a project called “Ice Worm” was being implemented. According to him, under the ice of the island a whole network of tunnels of 4000 kilometers long was dug, along which up to 600 nuclear missiles aimed at our country could continuously move. The project is currently frozen, but the liquidation of the INF Treaty, and in the future START-3, can give it a second life.

Finally, do not forget the role of Denmark in blocking Nord Stream-2. The threat of gaining US sovereignty over Greenland will be a powerful military-political argument against Russian business projects.

But what if Copenhagen abandons such “happiness”?

Indeed, the island was colonized by the Vikings and belongs to their descendants on the basis of autonomy. The population of Greenland does not exceed 60 thousand people. During World War II, the island fell into the sphere of influence of the USA and Great Britain. In 2008, the inhabitants of the island voted for the broadest possible self-government, which was considered by many political scientists as a step towards declaring independence in the future. By the way, while everyone is discussing Brexit, Greenland long ago left the European Union, retaining only a certain associated status.

In general, if Washington really wants to, then it will receive the next staff. It is enough to recall how they performed this trick with Hawaii.

We are in Yandex Zen
It's important
7
Ukraine from the inside: traitors, curators and those who watch from the Kremlin
Ten "defeats" of Putin
Reporterin Yandex News
Read Reporterin Google News
3 comments
Information