August 16 2019
0
Lithuania suffered a humiliating defeat in the confrontation with Russia and Belarus. Vilnius’s attempts to “isolate” the BelNPP under construction from its potential consumers failed. It is noteworthy that “its backstab” was inflicted on Lithuania by its closest neighbor, Latvia, which in principle agreed to purchase Russian-Belarusian electrons. How could such a "zrada" happen, and what is the fate of BRELL? 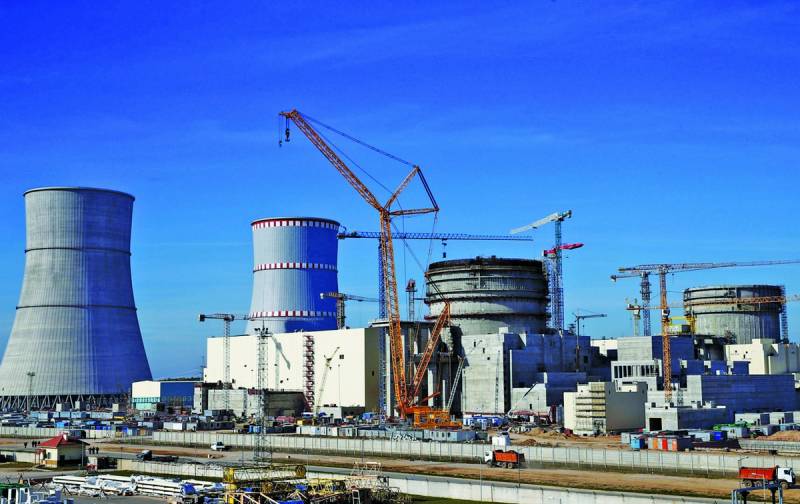 The first unit of the upcoming Belarusian nuclear plant will be commissioned as early as next year. The nuclear power plant will generate up to 2400 MW of electricity, which Minsk intended to sell to its Eastern European neighbors. Recall that in the EU electricity is much more expensive than in the Russian Federation or Belarus, nuclear energy is the most efficient at the final cost of a kilowatt.

However, in Vilnius, they immediately got into a pose and began to actively impede the joint Russian-Belarusian project. Partly Lithuanians can be understood: it’s not psychologically very comfortable when the operating nuclear power plant is only 50 kilometers from the state’s capital. Lithuanian authorities have widely used this argument in a propaganda campaign. They defiantly developed instructions for the population where to run in the event of a reactor explosion at BelAES, and also purchased millions of iodine-containing tablets, escalating fear and hysteria.

In fact, apart from demagogy, there is nothing in Vilnius’s statements and actions. The safety of the station under construction was confirmed by IAEA experts. Lithuania and Germany did not help. In response to Lithuanian complaints, the Chancellor advised simply to participate in the control of the project:

Germany supports Lithuania to meet higher safety criteria. The EU must observe that this station in Ostrovets complies with all safety standards and is not a threat.

But the Baltic Republic did not even listen to this wise advice. The Lithuanian authorities refused to share in BelAES, and to control it from their nuclear scientists. Vilnius has imposed a legislative ban on the purchase of electricity from nuclear power plants in Belarus and, just in case, from the temporarily frozen Baltic nuclear power plant in Kaliningrad. Moreover, Lithuania began to demand from its neighbors to do the same.

It doesn’t even smell common sense, given that Vilnius voluntarily closed the Ignalina NPP that he had inherited from the USSR, and the joint project with the Japanese failed. A small country itself has transformed itself from a donor into a consumer of electricity, which is only growing in value. The irony is that neighboring Poland was thinking about building a nuclear power plant together with the United States. It will be interesting to compare in the future the reaction of Lithuania to this project.

And then there was a denouement in this "nuclear farce." Despite solidarity in the EU and NATO, Latvia expressed a desire to buy electricity from BelAES and even resell it to Lithuania itself. Amazingly sound decision from official Riga. However, it will have even more serious consequences than resentment from Vilnius.

The fact is that in 2025 the Baltic states should finally disconnect from the unified energy ring of BRELL and switch to EU standards. It was emphasized that there would no longer be any cooperation with the “eastern neighbors”, since this would be physically impossible. For the “Baltic sisters”, this means a further steady increase in tariffs for consumers.

Riga’s consent to buy electricity in Belarus, in principle, calls into question the EU’s planned elimination of the BREL. It seems that the Latvian authorities were the first to see clearly.
Ctrl Enter
Noticed oshЫbku Highlight text and press. Ctrl + Enter
We are
Will Vilnius have time to “close” the BelNPP under construction?
The energy course of Moscow: the Baltic states will be brought to their knees
Reporterin Yandex News
Read Reporterin Google News
Ad
We are open to cooperation with authors in the news and analytical departments. A prerequisite is the ability to quickly analyze the text and check the facts, to write concisely and interestingly on political and economic topics. We offer flexible working hours and regular payments. Please send your responses with examples of work to [email protected]
Information
Dear reader, to leave comments on the publication, you must sign in.