April 24 2018
2
In 2017, Roscosmos took part in the creation of the visited near-moon station Deep Space Gateway together with the American NASA, Canada, Japan and the countries of the European Union. The initiator of this project was the United States after Donald Trump expressed his clear intention to return to the moon. At the same time, it may seem surprising that in the framework of this project, landing on an earth satellite is not provided. 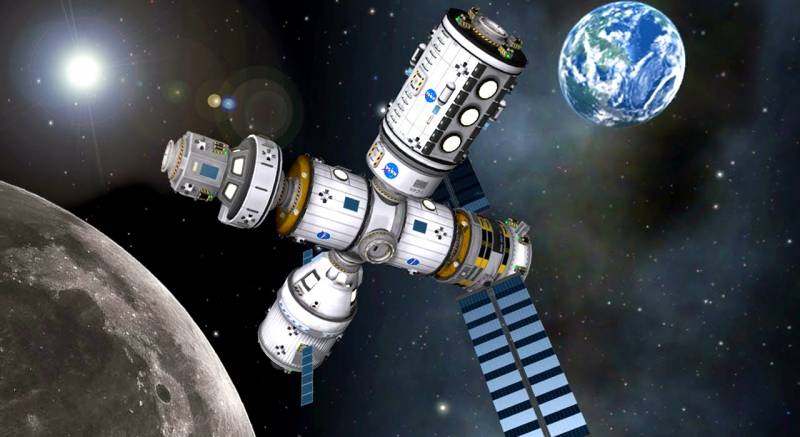 The refusal of repeated walks of American astronauts on the moon by the ambitious President Trump was convinced by NASA experts because of the unnecessarily high risk of landing and taking off from the lunar surface. Moreover, Technology residential complexes tested in space zero gravity, has not yet been adapted to the gravity of the moon. Therefore, the stake in this project is made on a lunar orbit.

The station will be as automated as possible and used on a rotational basis. Unlike the ISS, which is located in the upper atmosphere and is protected by the Earth's magnetic field, the Deep Space Gateway will rotate in real interplanetary space penetrated by galactic and solar radiation. Thanks to the experience of its use, effective protection technologies for the future human flight to Mars can be developed.

The presence of the Deep Space Gateway in orbit can significantly facilitate flights to the moon itself by increasing the cargo module, which can be delivered automatically. A spaceship for flying to Mars can be assembled using Deep Space Gateway, it is even possible to use some station modules in the design of the conqueror of the Red Planet.

Entering into this ambitious project of Roscosmos had several advantages: it gave hope for orders for equipment for NASA, there was an incentive for the creation and actual use of superheavy rockets, and additional funding could flow into the entire space industry.

However, it turned out that the United States has its own view on the development of the program. Firstly, for political reasons, China was not allowed into it, which has its own promising space programs. Secondly, the States impose on Russia their own technological standards in the implementation of the project.

The United States insists that Roskosmos build a lock complex for the station according to NASA standards, respectively, all components and chemical agents should be replaced. In practice, this means that Roscosmos will continue to be forced to work according to American standards. The United States also invited astronauts to leave the station into space in American spacesuits, which the Russian Federation Council indicated that Russian spacesuits are more reliable and have proven themselves better.

Roscosmos tried to convince Americans to use the experience of the ISS with the creation of autonomous modules by different participating countries, but the United States strongly opposed such an initiative.

In fact, despite the formal international status, this project is American, and they will set the tone for its implementation and future use. There will be no second MCC in the Queen. Therefore, Russia should decide whether it should participate in the project in the wake of the United States and its allies, or to implement its own project, possibly in equal cooperation with China.
Ctrl Enter
Noticed oshЫbku Highlight text and press. Ctrl + Enter
We are
Russia left the American project of the near-moon station
The US is trying to bend Russia under itself in a grand project
Reporterin Yandex News
Read Reporterin Google News
Ad
We are open to cooperation with authors in the news and analytical departments. A prerequisite is the ability to quickly analyze the text and check the facts, to write concisely and interestingly on political and economic topics. We offer flexible working hours and regular payments. Please send your responses with examples of work to [email protected]
2 comments
Information
Dear reader, to leave comments on the publication, you must sign in.