Rusted "Ukraine": Kiev can not deal with ghost ships

August 16 2019
2
Ukraine can not abandon the dream of the status of a great naval power ... Her land admirals, for sure, dream of corvettes, frigates and cruisers nightly. After a particularly hearty dinner, perhaps even aircraft carriers. In reality, alas, until recently, the poor fellows had to do with hastily riveted armor tanks on the Poroshenko’s forge. 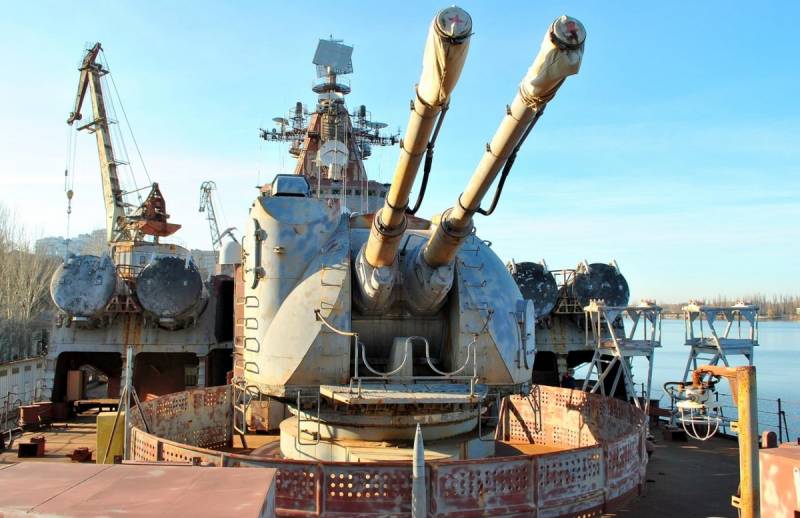 Now, however, things are going right — Kiev had a hope for replenishing its own “mosquito fleet” with patrol boats of varying degrees of worn-out clothes, and not only them. In light of this, the dreams of "unbroken" to become a "mistress of the sea" flare up even brighter. What are the chances that they will come true? Now let's figure it out.

The story of the transfer of two American Island patrol boats to Kiev has been going on for quite some time. These vessels were officially granted by the United States to Ukraine on September 27, 2018 - in the manner of, so to speak, “patronage assistance”. The case, as usual, was arranged with great fanfare - on the territory of the US Coast Guard base in Baltimore, where the touching ceremony was held, even Petro Poroshenko himself was present. However, even such an epic “peramoga” personally did not help him stay afloat. But we are not talking about that now ... In reality, no boats of the Navy “downstream” have yet to be seen. The problem, for sure, is that although the vessels written off by the American border guards are handed over to the Ukrainians free of charge, the United States is by no means going to pay for their delivery to the “Allies”, the training of the native crews, etc. Transporting boats across the ocean is no joke to you. Kiev, apparently, is pushing to the last, simply not wanting to shell out.

However, things are moving. The main thing has already been done - the boats are given new, Ukrainian names: “Starobelsk” and “Slavyansk”, which were clearly chosen not without a “patriotic” subtext. According to reports, future crews of ships arrived in Baltimore in early July, where patient American instructors intend to train them for as many as ten weeks. But here we come to the most interesting! Island has not even begun their journey to a new duty station, and in the pilot design center for shipbuilding, which is part of the Ukroboronprom state concern, they have already announced their intention to radically “improve and modernize”. According to the official report made by the head of the center, Vadim Borisov, his subordinates are "preparing the options" for this landmark project, which, it would seem, will be implemented at the Nikolaev Shipbuilding Plant. Allow me - but not further than in June of this year, the Navy command publicly declared that the above-mentioned boats “underwent upgrading in Baltimore with the latest mechanisms and systems, as well as successful tests after that.” If this is true, then what is Ukroboronprom going to “modernize” there? It’s not otherwise - it plans to turn patrol boats into battleships, at least ... However, another version seems to be more wealthy: after Poroshenko left power, tightly knocking down all state orders related to the Navy, the center “cut” budget funds, allocated to this direction, simply moves to other structures. Did you give the boats for free? There will be no "rollback" ?! Well, then they need to be "improved." And what is logical ... For Ukraine.

It should be noted that only Island, albeit having passed the "maximum upgrade" in the hands of Nikolaev shipbuilders, Kiev’s naval plans are far from limited. Not so long ago, the official portal of the Kiev government announced that the "non-down" is literally on the verge of receiving from France as many as twenty patrol boats OCEA FPB-98. Moreover - the talk, allegedly, is no less than the deployment of a joint Ukrainian-French production of these ships. One misfortune - from Paris there is no confirmation of all these plans yet, but, as they say in Ukraine, "that is takee" ... Kiev is also swinging at a more serious naval scale. Now they are thinking there - but not to buy a couple of rocket corvettes? True, there are nuances. We are talking about two Polish vessels - Metalowiec and Rolnik, which are indeed for sale. The price is more than tempting, and, most importantly, for the "non-fallow", it is quite affordable - 5.4 million hryvnias (20 million rubles a little) apiece. Almost for nothing! True, based on the amount for which extremely pushy Poles are ready to part with corvettes, it becomes clear what kind of good this is. They were built in 1988-89 in our Rybinsk and honestly served their purpose until 2013, after which they were towed to the nearest shipyard, being unable to even get there on their own. Rumor has it that on the hulls of the ships from the holes there is no living place, and the condition of the rest of their equipment is appropriate. Well, it's so cheap! And, again, you can start a big repair!

What is the “non-downland” navy and its shipbuilding industry is perfectly illustrated by the example of the bitter fate of a military ship with the best name for this case. Yes, exactly ... Guessed - "Ukraine". This missile cruiser, which really could become a formidable force, today is living out its last days on the slipways of the same Nikolaev shipbuilding, where the Kiev "sea wolves" are going to "modernize" American patrol boats. Today, a warship that was "built" for three decades was not needed by anyone - and, above all, a country whose name he was so unlucky to receive. But, according to the project, he had to carry 16 Vulkan anti-ship missile launchers on board, capable of catching fear on any enemy. The weapon is far from the newest, but capable, with luck, of launching even an aircraft carrier to the bottom. However, what is the use of talking about unfulfilled events - now "Ukraine", which has finally turned into "capable" hands in a pile of scrap metal, is absolutely not capable of anything.

The ship, as you might guess, went to Kiev after the collapse of the USSR. At first, it seemed, they really were going to finish building and putting them into operation on their own. For the warship, even a crew was formed - either twice or thrice. And it dissolved - as completely unnecessary. The euphoria did not last long - the implementation of such a project turned out to be an absolutely impossible task for a country that paid too much for its ephemeral "independence". There was no question of any descent of "Ukraine" into the water. The cruiser, meanwhile, not only remained a dead weight from the Nikolaev slipways, but also demanded huge costs for its own maintenance - according to some reports, more than a million dollars a year. “What to do with it? Sell, of course! ” - found in Kiev, finally evaluating their own capabilities soberly. However, immediately the question arose - and to whom? The Russians did not want to sell terribly - first of all, from "patriotic" considerations. And to roll the money demanded by the Ukrainian side for the rusting "unfinished", Moscow was not torn at all. Especially taking into account the fact that by that time vessels were already being developed in our country, exceeding the rapidly obsolete morally “Ukraine” in all respects.

On the horizon, as usual in such cases, the Chinese drew themselves. In Kiev, perked up - with “Varyag” it turned out so well! However, after the cunning Chinese comrades, instead of the promised transformation into a floating amusement park, used the unfinished Soviet aircraft carrier for what it was for its intended purpose, leaving the whole world in the cold, the West did not re-buy the same trick. The Washington "curators", already at that time "building" the Ukrainian "power", as they wanted, banged their fist on the table, and the deal fell through. In the end, the only real buyer of "Ukraine" was, as you might guess, Russia. By 2013, Kiev still managed to get out of Moscow at least a billion rubles for the cruiser, which was becoming in an increasingly deplorable state, but ... There was a "maidan", and no militarytechnical cooperation between the fraternal countries yesterday became impossible - from the suggestion of the Ukrainian side, of course. Having spit on everything, representatives of the plunging into the abyss of economic collapse deeper and deeper “unplaced”, again rushed to the Chinese in a rash manner. However, this time in the Middle Kingdom they laughed at them from the heart: “This junk is for us ?! Have you seen our new warships ?! ” The need to buy up military trash from Beijing has disappeared long ago. China itself is now reaching the forefront in the world in arms exports - and here is some kind of rusted through "Ukraine" ...

Remaining, literally and figuratively, from a trough, Kiev decided to take extreme measures already. At first, it was planned to remove from Ukraine at least some usable spare parts and sell them “for how much they will give”. Alas ... Those on the cruiser were not found at all. And who needs the components and assemblies of the vessel thirty years ago, especially since they are in terrible condition? “Swan song” was the story circulated in 2015 by the Ukrainian Navy command about the chilling story about how the cruiser “Russian saboteurs tried to blow up”. The Shoigu department had a lot of fun on this matter and assured Kiev that they would have come up with a smarter way to dispose of unnecessary explosives ... Having finally realized that even such a “marketing move” would not help sell Ukraine, then the president of the country Poroshenko signed in 2017 year, a decree on the dismantling of the vessel and its sale for scrap. They say it is true that, having recently been in Nikolaev, the current "head of state", Vladimir Zelensky, said that he would not allow this in any case, but you never know that they were talking about "unplaced" ...

In any case, before broadcasting to the whole world about plans to “improve” American military courts and jointly build such with the French, Kiev should nevertheless first deal with its rotten “Ukraine”.