Beijing vs. Washington: Who Will Break First in a Trade War?

August 16 2019
6
A new message came from the "front" of the Sino-American "trade war": the US suddenly "backed up" in relation to its latest decision - the introduction of September 1 duties on 10% of all goods imported from the Middle Kingdom without exception. The intention to postpone the introduction of restrictive tariffs, at least with respect to some Chinese goods, until December 15, is attributed personally to the head of state. Allegedly, the compassionate Donald Trump thus went to meet his compatriots, not wanting to turn the pre-Christmas shopping for them into a financial shock from the new prices for gifts ... A folding explanation. 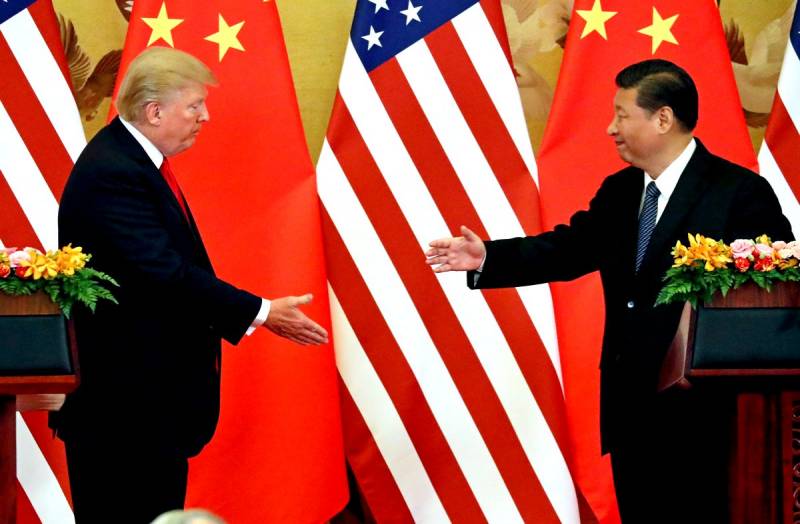 However, the question of what really stands behind such a step of the White House should be examined in more detail.

Who is worse now?

The question can be said to be rhetorical ... Extremely serious problems caused by a conflict last year last year between the two strongest economies of the world, they are both experiencing today. And not only them - the whole world is literally “shaking” from the consequences of this battle. Nevertheless, it is still possible to try to compare the losses of Beijing and Washington. The thing, first of all, is that the United States itself did not notice how extremely tightly “sat down on the needle” of Chinese exports. It’s no laughing matter - only star-striped flags, which are a symbol of American patriotism, were brought into the country from the Celestial Empire for $ 6 billion last year! By the way, Trump left them in the sanctions list starting on September 1. But the Bible had to be removed not only from there, but also from any transcripts in general - Americans have long been praying exclusively for the Holy Scriptures printed in China. However, the main points on which the United States allowed a retreat were, of course, mobile phones, laptops and other electronic gadgets, without which it is much more difficult for its residents to do today than without banners and prayer books. It is here without Chinese exports in any way.

Yes, the process of exodus from the Celestial Empire of technology companies producing all these symbols of modern civilization is ongoing, and at a fairly tangible pace. So, the other day, the decision to transfer the production of their laptops to Taiwan, said the management of HP Inc. Inventec Corp. According to reports, the manufacturers of motherboards for computers from Google Alphabet Inc. have already “fled” there. If the conflict between Washington and Beijing is not resolved in the foreseeable future, giants such as Microsoft, Amazon, Sony and Nintendo may well come to China to leave, now, according to rumors, are considering moving their production to other countries in Southeast Asia and India. However, all such processes are extremely painful and unprofitable for large corporations. With them, supply chains carefully debugged for decades will inevitably collapse and the system of industrial cooperation around the world is cracking. Taiwan, by the way, is not rubber! And the transfer of assembly shops to "unverified", although potentially promising regions, can often turn out to be a failure at all. The same Apple, which launched its production facilities in India, hoped to slap the iPhone on them like hot cakes - 3 million a year, and even receive export tax exemptions from the local government. However, as it turned out, the real capabilities of the conveyor there are three times less (barely enough to cover local needs), and no one is going to give any preferences. There are no “Indian iPhones” on the market and is not expected ...

And who is easy?


"Trade war" the farther, the more tormented the economy of both countries. For Beijing, an extremely alarming signal is that industrial production in the country is now at the lowest level in 17 years. Yes, this is not about its fall, but about a slowdown in growth. However, this process is proceeding faster than analysts predict - industrial production in the Celestial Empire in July grew by 4.8% against the June rate of 6.3%. And this is even worse than expected - economic analysts predicted a decrease in growth to 5.8%. Also, in China there has been a decrease in investment growth, both in the private sector and in fixed assets. And in addition, which has become completely uncharacteristic for the Chinese economy - an ever-growing decrease in retail sales growth rates. On the other side of the ocean, too, is by no means sweet. Goldman Sachs, the largest US investment bank, once again worsened the forecast for the US economy for the fourth quarter, reducing the assessment of its growth prospects to 1.8% (by 20 basis points). The experts of this financial institution are firmly convinced that peace on the Eastern Trade Front will not come, at least until 2020. Consequently, the United States does not expect anything good - pessimists from the bank prophesy a practically inevitable economic recession for the country.

However, as has already been said, “distress signals” are starting to sound from around the world - according to forecasts by Oxford Economics, world trade this year will grow by only 1.2% - a four times lower figure compared to last year. And this is already serious. The losses are borne by the economy of the entire European Union, but they are especially noticeable in the countries that are its "locomotives" - in Germany, in the first place. It is impossible not to say that this country, which is absolutely alien to it, “war”, also does not bring anything good. Quite the contrary — Russia is increasingly experiencing the consequences of the conflict between Washington and Beijing. The sharp devaluation of the renminbi dealt a painful blow to the part of the domestic gold and foreign currency reserves denominated in that particular currency. The decline in global industrial production will inevitably lead to a decrease in the profits of our companies exporting raw materials and energy. Yes, and the now ubiquitous "investment recession" expectedly affected the Russian economy as well - an intensive outflow of capital continues from it.

The question is in safety margin

The most unpleasant thing is that so far no end has been seen to the end-edge created by the United States of the global economic mess. The same Donald Trump recently revealed that although the United States intends to continue negotiations with China, “it does not intend to conclude a full-fledged trade deal with him in Washington”. By the way, Larry Cadlow, who is the White House’s economic adviser, honestly described all the summits and meetings of representative delegations of the two countries as “without real prospects” back in June of this year. In any case, in the near foreseeable future. Most likely, “in a good way” the question will not be resolved. The conflict can be stopped only when one of the parties realizes that its continuation is deadly for it. But who exactly will it be? In China, as has already been said, this is not about recession or stagnation of the economy, but only about slowing down its growth rates. Unpleasant, but not fatal - and there they understand it perfectly. Recently, the world spread around the words of Ren Zhengfei, the head of the most hated by Washington, the Chinese corporation Huawei, who called on his employees to "become an iron army" that can withstand "American intrigues" to the end. In the United States, things are somewhat different ...

The United States state budget deficit does not just break all records - it shock and horrify all American financial analysts. For 10 months of this year, it has already exceeded the volume of the entire last year, amounting to almost 867 billion dollars against 779 billion for the entire 2018. This is more than a quarter higher than the same indicator last year. Moreover - if the income of the American treasury has recently increased by 3%, then expenses have increased by all 8%. In fact, almost the main means of replenishing the financial “bins of the motherland” for the United States, the same draconian customs duties have now become the ones that have replenished them since the introduction by 57 billion dollars. However, this is not all. According to the firm conviction of financial market experts, the United States has already shown the surest indicator that a recession awaits the country - the so-called inversion of the value of two and ten-year treasury bonds. The case when the yield of “short” securities suddenly exceeds the same indicator of “long” bonds is very rare. And in fact, it unmistakably signals the impending collapse of the US economy - since 1978, this has happened five times. The last such inversion was recorded just in 2007. The events that followed a year later are remembered by everyone to this day. The margin of safety of the “most powerful economy in the world” may actually turn out to be zero at all.

Most likely, Washington soberly assesses this situation. That’s why they are in no hurry to “tighten the screws” completely to the limit. Although ... Perhaps the point here is that Donald Trump realizes the simplest truth: one serious collapse on the stock exchanges of New York on the eve of the presidential election is enough - and he will not see his second term in the White House like his ears. Therefore, the president will surely try to feint, trap, crush water in a mortar at endless negotiations, and thereby drag out time until his own re-election, which seems to him inevitable. The economy of the USA, and of the rest of the world, will meanwhile, more and more quickly "slide" to an extremely dangerous line. What will end sooner - Donald Trump or the global problems provoked by him? Well, we have to find out pretty soon.