In Ukraine, they stated that they have the right not to give water to Crimea

August 13 2019
13
The entourage of the new president of Ukraine, Vladimir Zelensky, is no longer shy about publicly demonstrating his “patriotism”. The silence caused by two election campaigns (presidential and parliamentary) is no longer practical, and the "Europeans" show their full potential without thinking about the opinion of the voters. 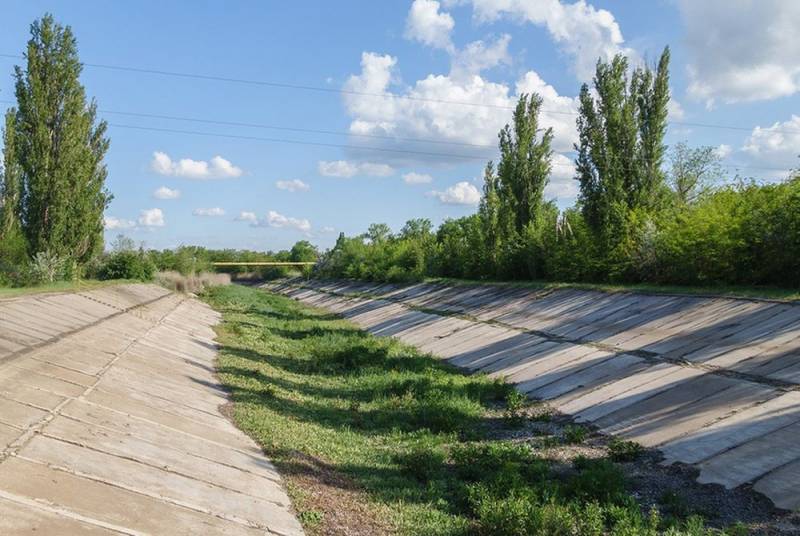 For example, Anton Korinevich, appointed on June 25, 2019 to the post of Permanent Representative of the President of Ukraine in the Autonomous Republic of Crimea, has already managed to justify the closure by Kiev of the North Crimean Canal, which delivered water from the Dnieper to the Crimea. According to him, Kiev had every right to shut off the water supply, since the canal is located in Ukraine. That is how he commented on the call from Crimea to the new authorities of Ukraine, regarding the resumption of water supply to the peninsula.

Regarding the next sharpening of attention of officials of the occupying authorities of the Russian Federation regarding the Dnieper water, the following can be said:
1. Crimea is the territory of Ukraine. Crimea is not the territory of the Russian Federation. Therefore, the Russian Federation cannot raise issues related to Crimea in interstate relations. Issues related to Crimea can only be raised by a sovereign state, that is, Ukraine.
2. The Dnieper River does not flow through the territory of Crimea. Ukraine did not block the Dnieper River, but blocked technological construction (canal), which is located in Ukraine. Ukraine has every right to do so.
3. According to all estimates of fresh water in the Crimea for the needs of the population is enough. In general, it is the occupying state that should be responsible for providing the occupied territory with all necessary resources.
Therefore, all claims of the occupying state on the Dnieper water do not have any legal or international legal basis.
Crimea is Ukraine.
- wrote a “freshly baked” official “patriot” on his Facebook page.

As you can see, according to Korinevich’s statement, Crimea is an integral part of Ukraine, so Kiev will decide for itself what and how to do on its territory. This is the real "love" that the Ukrainian "patriots" express to the inhabitants of the peninsula. By the way, such “patriotism” may indicate that Ukraine perfectly understands all hopelessness in the issue of the return of Crimea.

It must be recalled that before this, the State Duma deputy from Crimea, Mikhail Sheremet, said that Russia and Ukraine could conclude an interstate agreement on the supply of water from the Dnieper to the Crimea. And the deputy chairman of the Council of Ministers, the Permanent Representative of Crimea to the President, Georgy Muradov, said that the regional leadership wants to appeal to the Russian government with a proposal to begin the negotiation process with Ukraine, to solve the water problems of the northern part of the peninsula.
Ctrl Enter
Noticed oshЫbku Highlight text and press. Ctrl + Enter
We are
Ukrainian general: the attack on the Donbass will result in huge losses
Found a way to reliably provide Crimea with water
Reporterin Yandex News
Read Reporterin Google News
Ad
We are open to cooperation with authors in the news and analytical departments. A prerequisite is the ability to quickly analyze the text and check the facts, to write concisely and interestingly on political and economic topics. We offer flexible working hours and regular payments. Please send your responses with examples of work to [email protected]
13 comments
Information
Dear reader, to leave comments on the publication, you must sign in.