Steep dive, turning into a corkscrew: China and Turkey are finishing off Boeing

July 29 2019
9
The problems of the American aircraft building corporation, which began with the crash of two Boeing 737 MAX airliners - in Ethiopia and Indonesia, not only do not decline, but, on the contrary, grow like a snowball. Colossal losses, loss of reputation in the global aviation market, and, most importantly - loss of trust of business partners, almost all over the globe ... 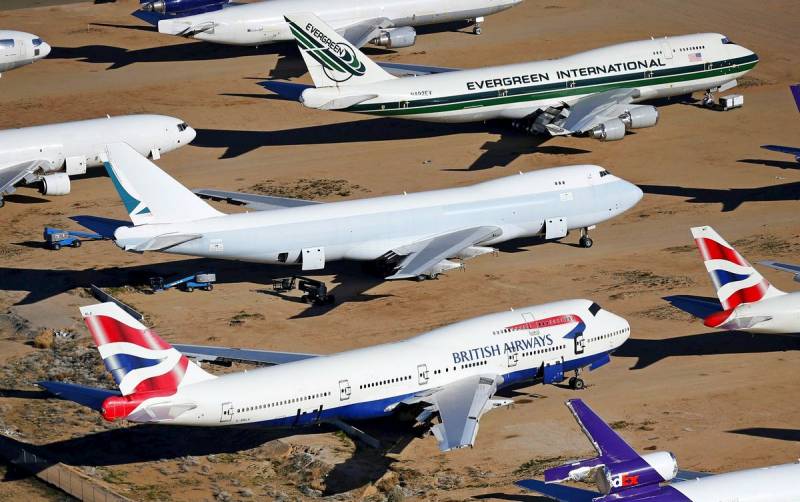 All this makes us think that the current, very deplorable state of the company may not even be a rapid peak, from which you can still try to get out, albeit moments before the disaster, and with a corkscrew - deadly and uncontrollable.

Some cons and no pluses

Reporting on financial indicators for the second quarter of 2019, Boeing was forced to admit that its loss over this time amounted to about $ 3 billion. For comparison, the same period last year brought the company a profit of 2.2 billion. Such sad indicators are a regularity - after all, after the fatal catastrophes that shocked the whole world, sales of the aviation giant fell by 35% to 15.75 billion, which is less than the far from optimistic “average” forecast for this year. Moreover - more and more airline companies and entire countries are turning away from him, despite desperate attempts to save a pretty shaky reputation. So, Boeing has already announced its intention to spend as much as $ 5 billion to pay compensation to those whose flights were canceled or delayed precisely in connection with the ban on the operation of the company's aircraft. Will this bring the expected result? Doubtful enough.

Refusing to cooperate with what seemed to be not so long ago almost the standard of reliability and respectability of a corporation, carriers makes pure pragmatism. Their motivation can be perfectly understood by the example of the same well-known Irish airline - the Ryanair low-cost airline, which had a lot of problems just because of cooperation with Boeing and its ill-fated 737 model. The Irish expected this year the supply of 58 such machines. However, in reality, they will receive them no more than three dozen, and even then - God forbid, next summer. This, however, is also far from guaranteed, since it does not depend on aircraft manufacturers at all. As a result, three hundred Ryanair pilots simply have nothing to fly on! The company is already working out a program to curtail its own activities in advance, evaluating possible traffic in the summer of 2020, half of what was planned. We are talking about reducing their own bases around the world, which air carriers consider unprofitable or unprofitable, or even completely closing them with a corresponding reduction in staff. All this can happen this fall.

The future is extremely foggy

The situation is no better with the prospects of Boeing. Having become a "stumbling block" for her, the 737s certainly will not rise into the sky before 2020. A cloud of regulators and inspectors fell upon the company, both American and international, determined to reveal all the shortcomings and miscalculations that could be dangerous for the operation of these aircraft. Well, and he who seeks, he is known to always find. Moreover, it’s not necessary to invent anything here - a couple of weeks ago after the next simulator test of the Boeing 737 MAX, the US Federal Aviation Safety Agency (FAA) announced that it had found a “new potential source of risk” on the plane, not clarifying, however, what exactly is it. Now, according to the protocol, new work is needed to eliminate the shortcomings, new tests, their meticulous analysis ... Only after this, the matter can reach the permission for a test flight, which is necessary to start operation. And time goes by ...

Alas, “thank God,” as it turns out, everything is with the latest and promising Boeing-777X model. According to available information, when testing engines designed specifically for this vessel, problems were identified so serious that the corporation said: the first flight of this airliner planned for autumn 2019 will not take place. Everything is postponed - until next year. After being burnt in milk, the company now, as they say, “blow into the water”, reinsuring it purely and tregubo. Too expensive was the “maybe” with the 737 MAX. The 777s were to become “kings” in the passenger transportation markets - after all, this wide-body airliner was developed as a machine not only with the longest cabin, but in general - the largest passenger aircraft with two engines. The only question now is whether this miracle will ever come off the earth at all. The problems that the corporation has acquired have already gone far beyond the purely technical and financial. That is what today is the main danger to Boeing.

And politics in addition ...

The proverb that says: "where it is thin, there it breaks," fits this situation very well. The tragic plane crashes today were superimposed in addition to the consequences of the trade and sanctions wars that the White House is already waging with half the world. Thus, this month, China's largest air carrier, Air China, which previously worked with Boeing, announced its firm intention to purchase two dozen wide-body A350-900 airliners from Airbus. Moreover, this deal, which is valued at over $ 6 billion, has been confirmed by the Europeans as well. It seems that the Celestial Empire, which was in the forefront of countries that refused to operate the 737 MAX and closed their own skies for them, intends to get rid of Boeing altogether. How aggressive was this decision? policy Washington, which does not stop the economic confrontation with Beijing, is free to judge for itself. But the fact that Donald Trump should be "thanked" for the possible disruption of the purchase of 100 aircraft of this corporation by Turkish Airlines, there is no doubt. During a meeting in Osaka, Recep Erdogan recalled this deal worth $ 10 billion to his American counterpart - just when it came to the possible "punishment" of Ankara for the purchase of Russian S-400 air defense systems. Apparently, they did not hear him. And today, the Turkish leader declares that the contract can be “revised” ... There is no doubt that the failure of such a “fat” contract, against the background of already known problems, could become for Boeing almost the last nail in the coffin lid, and marks the beginning of a protracted and deep crisis in the corporation.

The most unpleasant moment in all that is happening is that the decency and business reliability of not only one American corporation, albeit one of the largest, but the ability of the US government to control its own manufacturers, as such, was called into question. The scandal with the certification of the "killer program" MCAS (Maneuvering Characteristics Augmentation) is growing and has already been spilled into the US press. The information that everyone in the same FAA, which, in theory, is responsible for the lives of millions of air passengers around the world, was made public, was responsible for testing this program, two, excuse the expression, gouging half-educated people. Or, as they write in the American media - "insufficiently competent employees." What to do, journalists lament - the staff turnover, because of which the most responsible state office hires the devil knows who. And these very "responsible" ones not only did not want (or could not) delve into the essence of the question entrusted to them, they still did not conduct independent testing of MCAS, content with a cheerful report about the tests received from Boeing itself. The fact that later the company decided to "modify a little" the program, thereby making it uncontrollable and turning it into a "time bomb" that killed two planes and three and a half hundred people, it was neither a dream nor a spirit! Boeing did not report this, because the FAA did not require such a report ...

Thus, we are no longer talking about the possible collapse of a powerful aviation concern, but about the United States losing its reputation as a country where “the most reliable”, “most tested” and “safest things” are produced. There is no doubt - now, after all that has happened, US control services will show Boeing a maximum of severity and partiality in order to wash away the stain of incompetence and unprofessionalism that has already fallen on them. As you might guess, this does not bring any pleasant prospects for the company. Her "flight" today more and more resembles not a complex aerobatics, but an uncontrolled and uncontrollable fall.
Ctrl Enter
Noticed oshЫbku Highlight text and press. Ctrl + Enter
We are
It's important18
Peace enforcement operation. Russia inflicts a preemptive strike on Kiev
“The dark August night came the one whom the Ukrainians were waiting with horror”
Reporterin Yandex News
Read Reporterin Google News
9 comments
Information
Dear reader, to leave comments on the publication, you must to register.
I have an account? Sign in