July 26 2019
0
Russia will send to the ISS its first anthropomorphic robot named Fedor, which will be in orbit for two weeks. Despite its rather limited functionality, and so far it can only shoot, drill and write on Twitter, this experiment can open up new perspectives in space exploration. 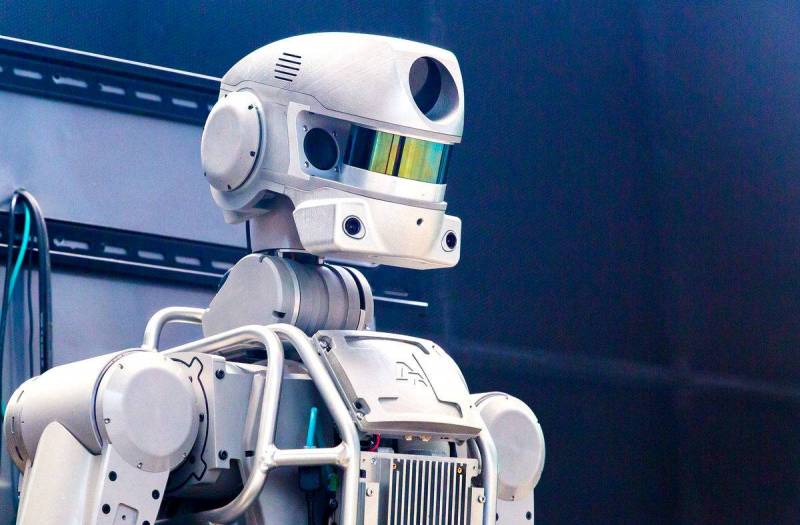 Fedor (FEDOR) is a humanoid robot developed by order of the Ministry of Emergency Situations. The rescuers' interest is obvious: to have a robot remotely controlled via satellite, with a height of 180 cm and a weight of 160 kilograms, with a total capacity of 20 horsepower, would be of great help in eliminating dangerous emergencies.

While not very cleverly working on a computer. Of course, the serial number of my series is 850, not 859. Nothing, the next time I will type after vibration tests, and not during the tests.
Today I was brought to Baikonur, to the Energia assembly and testing building. Interesting here pic.twitter.com/m2djgZ2BuZ


The project started in 2014 under the name “Rescuer”, and the robot itself received the fashionable name “Avatar”. The very next year, the prototype was presented to Vladimir Putin. In 2016, Dmitry Rogozin instructed to develop a version for space, which can be used on the promising spacecraft Federation. The name "Fedor" was given to the robotic complex by Rogozin himself, and subsequently the corresponding science-like name (Final Experimental Demonstration Object Research (FEDOR) was coined under it.

For the night, they put me in a wardrobe trunk that looks like a gun. In the morning, two specialists wake up, saying: "We must, Fedya, we must ..." And the hard work begins again: testing, checking my mechanical systems and drives. Preparing to fly takes diligence. pic.twitter.com/TM9CO5YggH


However, later, the developers decided to abandon the "Russian" name, giving the robot an "American" - Skybot F-850. In fact, the rescuer-cosmonaut from the inside is only half Russian, the rest of the parts are produced abroad - in the USA, Germany, Japan and other countries. They collect it in St. Petersburg, the mechanism is controlled on the basis of the "bourgeois" Linux operating system.

Let's face it, the set of its features looks very specific. Our robot can drive a car and an ATV, open and close certain doors, shoot pistols with two hands and drill a wall with a drill. It’s more like not a rescuer, but a “liquidator”. This is a joke, of course.

And if without jokes, then Fyodor (FEDOR) / Skybot F-850 can open us the way to deep space. Its original name "Avatar" most faithfully reflects the essence - it is not so much a self-acting robot as a remotely controlled human manipulator. In fact, in the future he may become the equivalent of an astronaut.

Hello! I am Skybot F-859. For their own - just Fedor. Now I am getting acquainted with the control system of the Soyuz MS-14 spacecraft, on which I plan to fly to # ISS 22 August 2019 year. pic.twitter.com/fL9j8scdOb


It is known that flights to the moon, the asteroid belt, Mars and beyond, are associated with a huge variety of problems. This is the danger of cosmic radiation, and the risk of depressurization of the ship, and the need to carry a large amount of oxygen for breathing, water and food for the crew. It turns out very expensive, and there are no special guarantees of returning home for astronauts.

But a robot avatar is capable of doing exactly the same job as an astronaut. Rather, the astronaut will do it remotely, being safe on Earth. Immediately reduced requirements for interplanetary spacecraft and the cost of sending them. The moon, asteroids, Mars in the future will be studied and mastered by robots. Avatar management will be carried out by a kind of hybrid of artificial intelligence and manual operator control.

It is clear that this is not a matter of today or tomorrow, but a step has been taken in the right direction.
Ctrl Enter
Noticed oshЫbku Highlight text and press. Ctrl + Enter
We are
Robot Fedor may send to the moon
“Fedor” in orbit: why Russia needs a robot-astronaut
Reporterin Yandex News
Read Reporterin Google News
Information
Dear reader, to leave comments on the publication, you must sign in.